It was no surprise when Interactive Intelligence CEO Don Brown announced PureCloud during his keynote address at Interactions 2014 in Indianapolis this week. For over a year, Brown has been discussing the coming of a new multi-tenant cloud solution with financial analysts on quarterly calls. And those of us who attend the yearly event knew from last year's NDA final roadmap session by Brown that the new service was expected in 2014. But Don Brown's description of plans for PureCloud still had elements that surprised.

1. PureCloud is Not Just About Contact Center
The assumption was that PureCloud would be a multi-tenant contact center solution, in contrast to the existing single-tenant Communications-as-a-Service (CaaS) offer. (You know what happens when you assume...) It became clear as Don Brown discussed PureCloud with analysts, consultants and press during a pre-briefing session, that Interactive Intelligence sees a larger opportunity.

Since its inception, the Interactive Intelligence CIC platform has included enterprise telephony as well as contact center. That has been true of both the customer premises product and the CaaS service. That said, the majority of the company's revenue and seat licenses came from contact center deployments. As can be seen in the accompanying graphic, contact center is just one of the applications that will be delivered on the PureCloud at general availability in fourth quarter 2014. 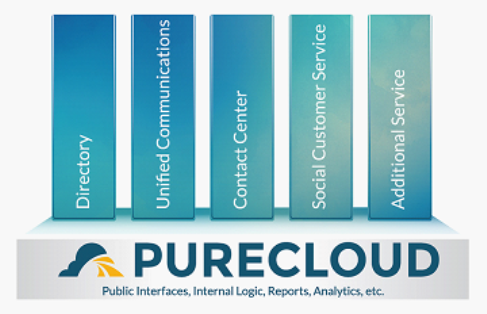 While it's not surprising to see that Unified Communications will be part of the new platform, the intent seems to be shifting. From today's "we also have UC" message, the PureCloud message seems to be "CC and UC together...and more." Brown believes – rightly – that no leader has yet emerged in the cloud-based unified communications market. "We think there is a hole you could drive a Mack truck through – for enterprise grade, cloud 2.0 UC service."

2. PureCloud Includes Social Collaboration and Customer Service
The component labeled "Directory" in the graphic has the look and feel of an enterprise social collaboration tool. It's described as an enterprise-wide directory based on social media design that supports voice and chat, with both mobile- and browser-based interfaces.

The Directory solution becomes particularly interesting when applied in the contact center, as information can be filtered dynamically based on skills, specialties, interests, availability, performance, etc. Directory enables customers to choose which agent they wish to work with based on the type of dynamic agent information that is stored in the Directory. While not necessarily the answer for every type of contact center, there is an element of empowering customers to choose their own agent resource that is appealing.

3. PureCloud Isn't Being Built in Indianapolis
Now on my tenth or so trip to this thriving state capital (each one to visit with Interactive Intelligence), it was interesting to hear from Brown that PureCloud development is co-located with the recently acquired OrgSpan team in Raleigh, NC. OrgSpan was founded by former Interactive Intelligence engineers with at least some seed funding from Don Brown. OrgSpan is the origin of the Directory capability outlined above, and according to Brown, had "built a lot of foundational elements" for a next-generation cloud-based solution. Interactive Intelligence entered into a partnership to build a PureCloud on top of what the OrgSpan team had already done.

Why is this noteworthy? It reminds me of a similar move by Cisco's Rowan Trollope to set up a development team in San Francisco – away from corporate San Jose – to build a next-generation platform, sometimes referred to internally as WebEx 2.0. Physical separation from the day-to-day care and feeding of the current solution with a team dedicated to innovation is the common – and seemingly necessary – element.