From AI, to AR/VR, microservices, and beyond, Genesys aims to disrupt and set a new standard for customer experience.

In opening and closing the Genesys CX18 event this week, CEO Paul Segre stressed the importance of innovating -- for Genesys itself, its customers, and, well, every other business on the planet. The conference theme, "Connect, Engage, Innovate," is meant to convey that each of these elements are intertwined, and that connecting and engaging with customers is an essential ingredient for innovation.

In its R&D, Genesys continues to bet big on artificial intelligence (AI), infusing its product portfolio with intelligence in a "blended" approach via virtual assistant Kate and launching new machine learning (ML)-driven solutions like Predictive Routing (read related No Jitter post). Additionally, Genesys continues to invest in the enhanced augmented reality/virtual reality (AR/VR) solutions that date back to concepts developed at Interactive Intelligence (ININ), which it acquired in December 2016.

The AR/VR solutions -- you guessed it! -- also incorporate AI in the personified form of Kate, as Genesys AR/VR SME Simon Wright showed in a couple of on-stage demos. The first demo focused on tourism use cases where a cruise line, for example, could provide customers with a way to explore a ship prior to purchasing their vacation trips. In the demo, the user was even able to venture out to the destination cities and click to roam down streets and navigate to local restaurants or beaches, for example, to get a fuller picture of what the trip experience would be like.

While the user is exploring, an embodied Kate is present to enhance the experience by making herself available for questions and offering up details as relevant. And at the end of the VR session, Kate gives the user a call to action, directing him to click an embedded button to chat with a booking agent or offering up a Web link detailing next steps.

In the second demo, Genesys demonstrated a "3-D heightened [living data experience,]" as described by Genesys CMO Merijn te Booij. The demo featured millions of data points in a sphere shape to show how AR/VR technology could allow dynamic visualization of a data ecosystem. 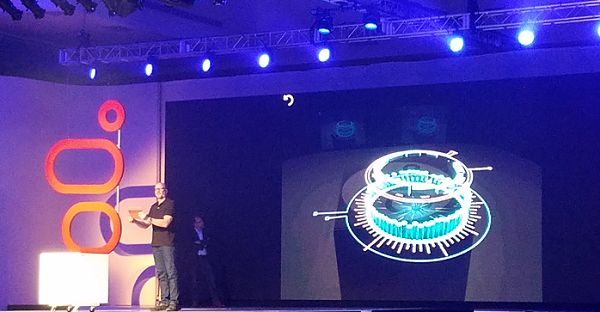 "Mixed realities will radically change the way we think about CX," said te Booij. He also echoed colleagues' comments that Genesys feels it's important to be transparent about how much AI is going to impact Genesys strategy moving forward.

Genesys also announced this week that it has adopted a microservices architecture (which was ININ's approach as well) in order to "homogenize" its technology across its three core platforms -- PureCloud, PureConnect, and PureEngage. With this model, Genesys only has to build features and capabilities once, as microservices, and customers can use them regardless of which system they're running, Peter Graf, chief product officer, said.

Additionally, Genesys is offering more open APIs for developers who want to expand on its technology, Graf said.

Regarding its three core platforms, Graf outlined the roadmaps for each one. Here's what you can expect to see throughout the remainder of the year:

The company's product strategy has already served it well, evidenced in the nearly 700 new businesses it's signed on in the past five quarters, Genesys president Tom Eggemeier said in a No Jitter briefing.

While on-premises deployments continues to represent the majority of Genesys business, more than half of the 700 new customers (roughly 400), including notable brands such as Coca-Cola, selected a cloud model. As such, cloud now represents roughly one-quarter of Genesys business. Further, about half of these PureCloud wins are from businesses outside of North America, and 14% are in retail -- a traditionally underrepresented vertical for Genesys, Eggemeier said.

Of the total 700 new logos, 75% migrated off legacy systems from Avaya and Cisco, Genesys said, although it did not share further detail about average deployment size or how many seats these 700 logos represent.