What's Up with Cisco's Collaboration Business?

Industry analysts and other third-party experts explore where the business is at, and where it’s going.

[Editor's note: Since publishing this piece this morning, Cisco confirmed Jonathan Rosenberg's departure as CTO and Cullen Jennings, who had been Fellow in the office of the CTO, as his replacement.]

Industry watchers have started to question Cisco's Collaboration strategy, with the group this year grappling with a leadership overhaul; the Spark-Webex rebranding (which some say signals a misstep), and the BroadSoft acquisition, which sparked a flurry of speculation not only on its impact on Cisco but also the larger UC industry. And let's not forget this has all taken place with a backdrop of continued transition from hardware to software and a subscription-based model. Taken altogether, that's an awful lot of change with which to contend.

But change is necessary for progress, as the saying goes. And industry analysts and other third-party experts mostly seem to agree that Cisco is making strides with its Collaboration business, if not for a few bumps along the way. While we won't go over the leadership changes in detail here, see the companion piece, "New Execs Eye Change at Cisco Collaboration," to get insight direct from the current executive team on where they are taking their various business segments moving forward into Cisco's FY2019.

Where's the Growth Coming From?

What's unclear, however, is how much revenue the Collaboration business contributed. During last month's earnings call, Cisco CFO Kelly Kramer noted "solid growth" in Collaboration segments including unified communications, telepresence, and conferencing, but neither she nor others at Cisco specified what that means by the numbers. For some perspective, I turned to UC analyst Zeus Kerravala, of ZK Research. By his estimate, Kerravala said he'd expect solid growth to mean a percentage increase in the high-single or low-double digits. 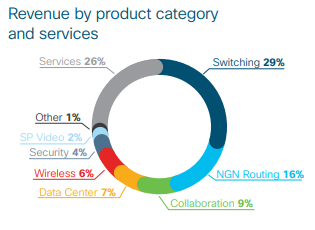 How Collaboration Fits Inside Cisco

Even if it has, the Collaboration business is really but "a pimple in Cisco's revenue posture," shared Tom Nolle, longtime independent consultant and founder of CIMI Corp.

But as Cisco shifts its focus from traditional UC products toward team collaboration, a la Webex Teams, will it lose that pull-through opportunity? Anecdotally, from what Kerravala has heard from channel partners, Cisco's legacy products continue to do well, but selling Webex Teams can be a struggle, he said.

Cisco right now is trying to figure out what the next act is for its Collaboration business, Kerravala said. Of late, it's focused on being the "ease of use" collaboration tools provider, he said. But now with the arrival of user-friendly tools such as Slack for team collaboration and Zoom for video communication, where does Cisco go from here? Under the leadership of Rowan Trollope, who had been SVP and GM of Internet of Things and Applications, the Collaboration group put a lot of the emphasis on artificial intelligence (AI), but hasn't said much since his leave-taking in May, Kerravala said.

Of course, it seems that Cisco is clearly committed to AI within Collaboration, given that Trollope's replacement, Amy Chang, comes from the acquisition of Accompany, an AI company focused on relationships. Since Chang came on board, however, she has been lying pretty low and has yet to articulate her strategy. And as Kerravala noted, Cisco needs to make that strategy clear soon.