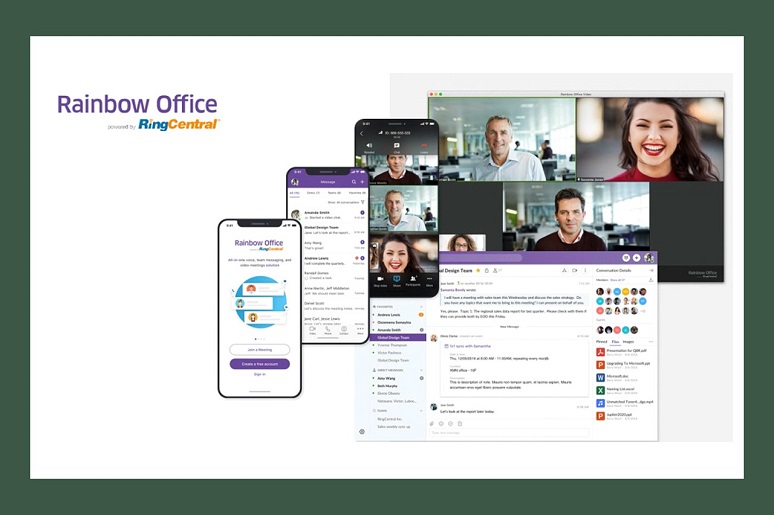 In 2011, VC Marc Andreesen uttered the now-famous words: “Software is eating the world.” Fast-forward a decade, and now it’s cloud that’s eating the world — and in communications, that cloud is run by RingCentral.
Since last fall, RingCentral has been eating up cloud share. It began in October 2019, when the company announced a "one-of-a-kind" partnership through which Avaya would sell an Avaya-tweaked version of RingCentral called Avaya Cloud Office by RingCentral. A similar deal with Atos, a global systems integrator, followed last month. Through this partnership, Atos will resell RingCentral Office under the brand name of Unify Cloud Office. And this week we learned that Alcatel-Lucent Enterprise (ALE) has cut a deal with RingCentral, and will be selling RingCentral Office under the brand name of Rainbow Office powered by RingCentral.
Colors of the Rainbow
In teaming up with RingCentral for cloud, ALE will realize a benefit that’s similar to what Avaya and Atos see from their partnerships with the UCaaS leader. By aligning with RingCentral, ALE has fast-tracked UCaaS delivery based on a trusted, rock-solid, and well-known solution.
ALE, which has dabbled in cloud for years, has a strong private cloud and communications platform-as-a-service (CPaaS) offering. But it was missing a UCaaS option for down-market businesses looking for a cloud service. The Rainbow Office product fills this huge portfolio gap while providing a nice complement to the other pieces of the Rainbow portfolio: Rainbow, Rainbow CPaaS, and Rainbow Private Cloud.
ALE has a massive customer base of more than 40 million seats in over 100 countries. In a pre-briefing, ALE didn’t give me an exact number for the total addressable market it sees for Rainbow Office, but we can assume that larger enterprises will likely lean toward Rainbow Private Cloud. It did say that it will initially aggressively target about two million seats for Rainbow Office. I’m assuming those are customers chomping at the bit to migrate to cloud and, as is the case with the Avaya and Atos partnerships, RingCentral and ALE will jointly build a migration tool to help ALE customers move from legacy ALE to Rainbow Office with minimal risk.
Another interesting aspect of this deal is that it should open the door to ALE becoming a bigger player in the U.S.; currently, North America accounts for only about 3% of ALE revenue. I’ve talked to some government agencies and some other companies that, right or wrong, have been concerned about ALE’s ownership by the Chinese investment firm, Huaxin even though ALE executives have been clear that while Huaxin provides financial backing, ALE is a French company, run out of France, and managed by the people in France. Be that as it may, perception sometimes becomes reality and the U.S.-China dealings haven’t exactly been smooth, so I can see why there might be some nervousness.
Layering in Value
For RingCentral, the value is similar to what it gains through the earlier partnerships. In addition, to the massive customer base, this relationship provides an entrée to ALE’s 2,900 channel partners. The ALE customer base is overly heavy in Europe (71%), with the second largest concentration being in the Asia-Pacific (19%) region.
The ALE deal can bring RingCentral another level of value, too, its laser-focus on a handful of verticals: public sector, governments, transportation, healthcare, education, and hospitality. ALE approaches the market through the lens of digital transformation and builds a number of unique communications- centric solutions, often bringing in the Internet of Things or other technologies.
In addition, ALE is a unique partner for RingCentral in that it has a robust network and data center portfolio enabling it to sell broader solutions. In theory, RingCentral could take some of these solutions and replicate them into its customer base.
RingCentral’s rise has been nothing short of remarkable. It’s easy to say that the company is riding a cyclic trend, which is true, but this rising tide hasn’t lifted all boats. RingCentral has put an end to the debate of a couple of years ago as to whether it or 8x8 is the cloud market leader. In the past 24 months, RingCentral’s stock as grown slightly more than 200% while 8x8’s has declined 29% — certainly a tale of two companies. While customer feedback on 8x8 products, particularly for the contact center, is good, leadership changes and subsequent strategy shift have left it unable to gain serious traction.
Missed Opportunity
For ALE, when you look at the company now, it needed to do something like this to compete for UCaaS business. However, I don’t think it had to be this way. Huaxin has now owned ALE for about six years and has been disappointingly quiet. I remember when the deal happened, the goal was to double the size of ALE through organic (homegrown innovation) and inorganic (acquisition) growth. Given the company is in both the network and communications markets, as an owner with deep pockets it could have made many moves. Avaya’s network business, Brocade’s data center business, Polycom, Aerohive, BlueJeans, and Vidyo are just some of the companies that have been acquired by others during Huaxin’s ownership tenure of ALE.
In UCaaS, acquiring a company like Star2Star or Fuze — both likely acquisition targets —would have created accretive revenue and likely margin for ALE. Instead, its owners have been content to do nothing. Based on the state of the company, partnering with the marketing leader and de facto standard for cloud communications, RingCentral, is the right thing to do. Any chance ALE had to buy a cloud platform is now past.