Taps Google Cloud Platform as host for this latest in its Powered By line.

At the Latin America version of Avaya Engage, in Mexico City, Avaya last week announced the newest member of its UCaaS family. Powered By Avaya IX (aka IP Office) now runs as a set of containerized workloads on Google Cloud Platform. This solution has a number of similarities to -- as well as a few major differences from -- the virtual machine (VM)-based “Powered By” offering.
This Powered By version uses the same IP Office software, desk phones, and softphones as the VM version, and has the same levels of tier three and four support from Avaya. In addition, as with the earlier version, partners selling it need to provide SIP trunking services and network connectivity, as well as take care of the billing and tier one and two support.
As to the differences, the main ones are 1) that the software runs in containers instead of a VM and 2) Avaya hosts the software on Google Cloud infrastructure. With the virtual edition, partners provide the hosting infrastructure.
The software workloads run in containers, so the resource requirements are much lower than they are with VMs. The lightweight nature of containers enables Avaya to sell its cloud service to very small businesses -- fewer than 20 seats -- that it couldn’t serve with costlier VM-based offering. 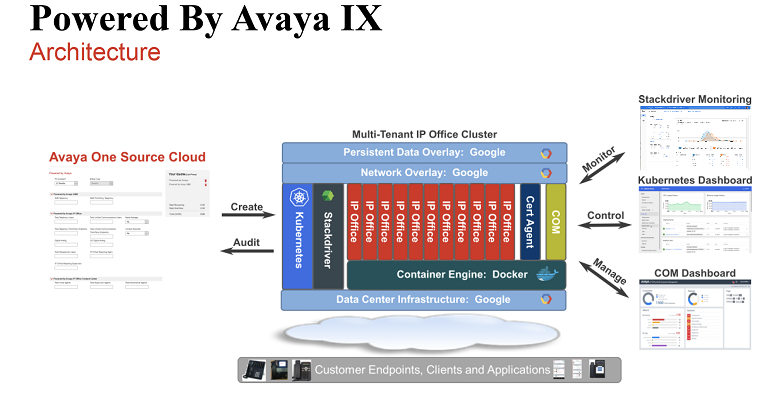 This version of Powered By follows the natural evolution of IP Office, which came to market more than 15 years ago as a proprietary hardware platform. Next came Server Edition, which saw the product ported to Linux so it could run on off-the-shelf servers and provide greater scalability. The Linux-based version is also what led to Avaya being able to run the rich IP Office feature set in a VM. The newest iteration, containerization, is a cloud-native model that can start small and scale massively.
Containers bring flexibility and agility but introduce more management complexity for partners. With the virtual edition, the entire workload runs in just a few VMs that operate perpetually. With containers, the application is disaggregated into dozens or even hundreds of smaller components that are constantly being spun up and down as needed. Keeping track of and managing the larger number of containers can be very difficult. To alleviate the pain, Avaya has enhanced its Cloud Operations Manager to allow for centralized and automated management, patching, and upgrades of multiple systems so these tasks don’t need to be handled one workload at a time.
Lastly, automated order processing that comes with the containerized option means a partner can have a service up and running in just a few minutes. The order placement triggers API calls that automatically spin up the necessary containers in the Google Cloud. This is a stark juxtaposition from the virtual edition, which takes hours to get up and running.
Considering that Google typically doesn’t allow resellers or vendors to host phone and other regulated services on its cloud platform, the ability to offer a containerized version of IP Office in the Google cloud is a big win for Avaya. Given the longtime relationship Avaya has had with Google, it seems to have gotten an exemption so that it can resell its UC server to partners or wholesale it to any company that wants to build a service around the containerized option.
The ability to run in containers opens other future go-to-market avenues for Avaya. It should be able to use the Google Kubernetes Engine (GKE) to make the workloads portable, simplifying the process of porting it to Amazon Web Services or Microsoft Azure if it so chooses. Also, partners that want to run this as a private cloud option can leverage GKE on premises to run Avaya IX UC on bare metal or an engineered system, like the Google Anthos.
Following a controlled release, the container version of Powered by IX became generally available in April. At time of last week’s announcement, Avaya is hosting the service in the 14 countries Google has clusters in and said it will expand as Google does. From these data centers, the service is available in 24 countries. The number of countries will grow as Avaya receives legal approval.
I expect the new Powered By Avaya IX to be an attractive option for SMBs. IP Office has been very popular in that segment and now those businesses have a simple, fast way to buy it as a cloud service.