Google dominated the tech headlines last week, with announcements in the collaboration and contact center spaces. But we also came across plenty of other UC&C-related news, with announcements on technologies such as artificial intelligence (AI), 5G, software-defined WAN (SD-WAN), and video from Microsoft, Zendesk, Verizon, AT&T, Cato Networks, Bluescape, and Intel.

Last week Microsoft announced a preview build of Skype for Business Server 2019 is now available for download. Even while stating that the future of UC&C is in the cloud with Teams and Office 365, Microsoft acknowledged that many enterprises have reasons for maintaining on-premises deployments.

"Our goal with this release is to enable customers to take advantage of key cloud features in an on-premises experience," Paul Cannon, senior product marketing manager, wrote on a Microsoft blog.

IT can download the preview today for testing purposes. Microsoft said it's not meant to be installed into production and it's important to note that this is a pre-release version that may change significantly prior to release.

Zendesk Syncs Up with Ada

Customer service and engagement platform provider Zendesk last week announced it's teaming up with Ada, a provider of AI-powered customer service chatbots, via a "deep integration" that's aimed at creating a harmony between AI and human agents. 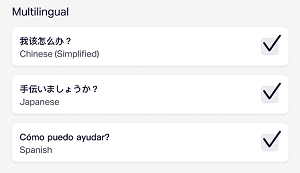 Ada, as I learned in an interview with co-founder and CEO Mike Murchison, is a rapidly growing two-year-old startup. The partnership makes Ada "the official AI partner" of Zendesk, Murchison said, adding that the two teams worked closely in building the integration. As shown to the right, Ada provides multilingual support, which means that users only have to train the chatbot once in one language, and the machine learning technology does the heavy lifting to propagate across multiple languages, Murchison told me.

Specifically, the integration involves the use of Ada's AI and automation technology within Zendesk Chat to train chatbots and identify when to escalate a conversation to live agent assistance. These bot-to-agent handoffs typically occur when interactions become more complex; for example, if a customer wants to cancel his or her account, the chatbot will direct to a live agent to improve the chances of customer retention.

The chatbot solution should enable companies to accelerate responses to simple inquiries for better first response times, and improve agent efficiency by allowing prioritization of the more complex issues, said Astha Malik, Zendesk VP of platform, in a prepared statement.

While Ada chatbots are currently text-based and chat only, voice chatbots are on the roadmap, Murchison said.

Verizon announced it's expanding its partnership with Ericsson into new markets, although it didn't specify which markets. The partnership has Verizon leveraging Ericsson Radio System 4G LTE equipment, which provides a 5G-ready platform that will allow Verizon to transition sites to 5G quickly upon deployment in those markets.

Per terms of this latest agreement, Verizon will use Ericsson's baseband and dual-band radios for widescale high-capacity deployments. The platform will be software upgradeable to 5G, capable of delivering CAT-M and NB-IoT for large-scale Internet of Things use cases.

Also in the race to 5G, AT&T announced its plans to introduce mobile 5G to customers in a dozen cities this year, including Charlotte and Raleigh, N.C.; Oklahoma City; Dallas and Waco, Texas; and Atlanta.

AT&T has been conducting 5G trials in a variety of cities already. Its 5G Evolution technology is live in more than 140 markets, and the company said it plans on reaching more than 400 markets by the end of the calendar year. These markets are locations with technology deployed that enables peak theoretical wireless speeds of at least 400 megabits per second on capable devices, the company said. Further, AT&T is on track to launch mobile 5G services and deliver 5G-capable devices later this year, said Melissa Arnoldi, president or AT&T Technology & Operations, in a prepared statement.

Cato Networks, a global provider of software-defined WAN (SD-WAN) as a service, has extended its application-based policy management capabilities to allow routing by identity, both on an individual or group basis.

With identity awareness, IT is able to set a policy that prioritizes a companywide address from the CEO or sales calls over other traffic, for example, said David Greenfield, secure networking evangelist at Cato. Likewise, if engineers are working on a mission-critical product development deadline, IT could prioritize their file transfers -- "something that's usually pretty low on the totem pole," he added.

"Increasingly, companies have recognized it's not just the applications they want to be thinking about, it's actually the identity of the people using those applications," Greenfield said.

In practice, the identity-based routing engine taps into Microsoft Active Directory data to associate unique identities with every packet flow, with the directory hierarchy providing organizational context for groups of users and business units, Greenfield said. Identity applies whether the user is on a desktop or mobile device, in the office or on the road, he added.

Additionally, Cato announced a variety of other enhancements for its SD-WAN service. These include multi-segment policy-based routing, real-time network analytics, high-availability deployment options, and more. All of these features, plus the identity-based routing, are now available.

Via a newly announced free plugin, Bluescape has made its digital collaboration workspace technology available for use with the Intel Unite meeting room solution.

The plugin, called BluescapeNow, allows users to create shared workspaces for online whiteboarding and visual collaboration. Within a workspace, team members can add notes, draw, and post updates, for example. Users also can bring in content from a variety of other applications, with BluescapeNow integrations available for Dropbox, Facebook, Instagram, Gmail, Google photos, Microsoft OneDrive, and others, said Jeff Smith, solutions manager at Bluescape.

"The operative words are 'quick' and 'easy' -- Intel Unite users should just be able to walk in a room and start using it without needing any onboarding and only minimal training," Smith said.

The content persists in a secure "canvas," in Bluescape's parlance, for continuous access -- and users can view these project workspaces from their mobile devices, laptops, or touch-enabled conference room screens.

Beth Schultz, No Jitter editor, contributed to this round-up.