Virtual Events in VR: The Reality

An industry analyst shares his thoughts on the VR option for NICE's recent Interactions event. 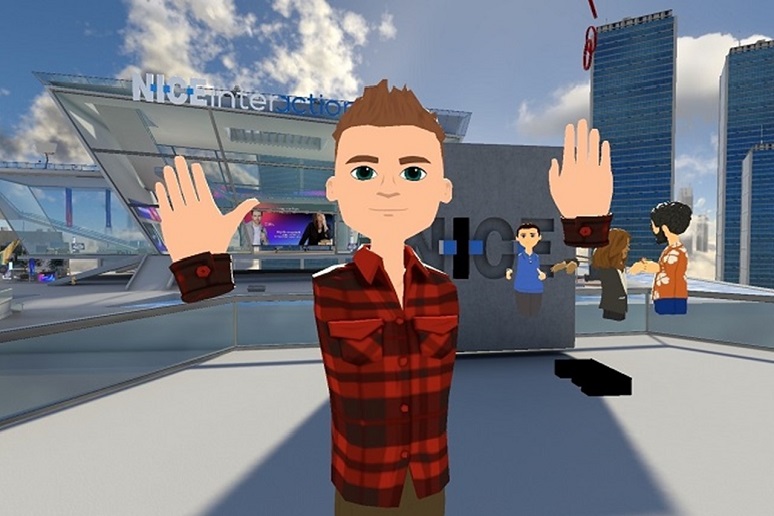 As someone who is super interested in virtual reality (VR), I jumped at the chance to attend the recent NICE Interactions 2022 virtual conference in VR. While the event drew 25,000 virtual attendees from around the world in a more traditional web-based video experience, NICE also offered a VR experience to interested attendees.
Attendees who registered for the VR experience received a VR headset included with the registration. NICE created a beautiful virtual conference environment in VR, where attendees could explore, meet with other attendees, watch keynotes, and attend breakout sessions and demos. While you didn’t need to be in VR to watch the keynotes, I found the experience more fun and focused than watching on a PC. But it is the interaction with other attendees and speakers where VR really shines and provides the most significant advantage over traditional video-based platforms.
After the event, I created a short video about the experience and why I think VR is such a great fit for virtual events. You can view it here.
But, and with emerging tech there usually is a “but,” I must say there are a few considerable challenges ahead before we all start donning headsets to join events. Below are two of the biggest obstacles to using VR for virtual events today.
Friction in Joining the Event
While NICE did an excellent job onboarding and helping users join the VR experience, joining VR events poses several challenges, especially for new-to-VR users.
First, you must have a VR headset and know how to use it. While Meta has done a great job with the Oculus Quest 2, selling tens of millions of headsets, most business users have no experience with one. And there’s a learning curve of using one that doesn’t take long, but it is an entirely new experience. Joining a Zoom call is easy, but what if you’d never used a computer before? How do you turn it on? How do you log in? How do you download the Zoom client? How do you know which meeting to join? Oh, it’s in an email, but how do you check email? So the learning curve is real, but it isn’t something inherent to the technology.
Another friction point is accessing the platform where NICE hosted its event. In this case, it was AltspaceVR, which Microsoft owns. One of the things Microsoft did after acquiring AltspaceVR was beef-up security to their high standards. Making an online space safe and secure can add friction points, such as requiring Microsoft logins (some types don’t work) and whitelisting users, which can cause difficulties getting into the space.
As users get more comfortable with VR technology, many of these problems will likely disappear. Joining a Zoom call is easy because we already know how to use a computer, and in most cases, we click on a calendar entry and drop into the meeting. Once more of our computing applications, such as email and calendar, are natively supported in VR, joining VR meetings and events will be as easy.
Headset Form Factor
As a VR veteran, the friction points I mentioned above are not a big issue for me. The headset form factor is a big issue for me. I’m okay for about an hour. But after 90 minutes or so, I grew weary of the weight and pressure on my head and face. And while you can tether them to a power source to go beyond the two-hour battery life, they aren’t practical to wear for an entire day. Or even half a day. I know some folks that work all day with a headset on, but for me, a smaller and lighter headset is necessary before I can attend a virtual conference that is more than two hours in a single session.
The good news is vendors will fix this problem in the coming years. Rapid advancements in the lens, plus battery and mobile power, are driving down the size and weight. The key is that we still call these things headsets. We are at the brick cell phone stage of the market cycle, with new form factors on the horizon. When we start referring to VR glasses instead of VR headsets, we will have reached the point where we can comfortably wear the device for several hours at a time.
And there are many other obstacles, including user acceptance, scalability, improving moderator controls, integration of platforms outside VR, and more to sort out before VR events can go mainstream. As fellow BCStrategies colleague, Blair Pleasant pointed out in her recent No Jitter post, “Lost and Confused in the Virtual, Immersive World,” even things like taking notes were difficult if not impossible in the VR experience.
While these friction points are indeed real, I’m confident they will resolve over time. And probably sooner than you think. Meta is releasing a new device this year optimized for work, allowing users to access their computers on several large customizable screens in VR. If the device is comfortable enough to wear for hours at a time, users will already be spending a good part of their day in VR. Joining a VR meeting while already in VR will be as easy as joining a Zoom meeting today.
Will virtual events move to VR? Yes. Will it happen today? No. But the transition is underway, as demonstrated by the successful VR experience at NICE Interactions 2022.