ZaiLab: The Story Behind the Space Truck

A closer look at the South Africa contact center company making its debut in the North American market.

If you made it to the show floor at Enterprise Connect 2018, then you saw "the truck." It visually overshadowed almost everything else in the exhibit hall -- and that was the point. ZaiLab used the truck to bring attention to a new contact center company from Cape Town, South Africa, launching this year in North America.

I admit that my title is a bit of a bait and switch. While the story behind the so-called ZaiTruck is an interesting one, it has already been told. View this YouTube video to hear the tale of how the truck made the trip from South Africa to the Enterprise Connect show floor in Orlando, Fla. Here on No Jitter, we are likely more interested in the story of the company, team, and solution behind the truck -- and that's the one that I will tell. 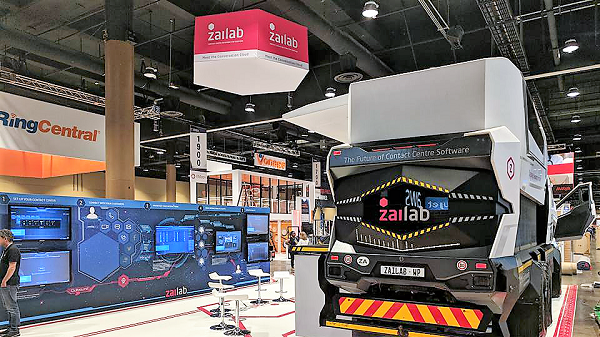 I discussed the company and its products with ZaiLab founder and CEO Nour Addine Ayyoub before he headed back to Cape Town from the United States. Ayyoub explained that he is a developer and entrepreneur at heart. After spending six years at a venture he co-founded with a London-based financial conglomerate, Old Mutual, he was ready for a new adventure.

Having been exposed to the contact center solutions available in the market when at the venture, Old Mutual Finance, Ayyoub was convinced there had to be a better way -- contact centers were still operating with "ancient technology."

"My vision was to create a real contact center in the cloud, accessible to everybody, with the ultimate goal of creating employment," says Ayyoub on his LinkedIn page. "I also wanted to make contact centers sexy. I love science fiction movies, and I thought their style was perfect for a new kind of contact center. Turns out I was right."

The science fiction style was evident in the video wall that was part of ZaiLab's booth at Enterprise Connect. The video wall can be seen in the above photo, which also includes the ZaiTruck. The ZaiLab team added a platform stage, stairs, handrails, and furniture to the truck so visitors could look around, meet with the team and even demo the contact center software.

The quick facts on the ZaiLab solution are:

Speaking of what makes ZaiLab different, I would be remiss if I did not mention the social consciousness that pervades the company culture. ZaiLab is the contact center software for a project in Western Cape, South Africa, to Reimagine Delft. An impoverished neighborhood in the Cape Town area, Delft was established near the end of apartheid. The area still struggles tremendously with poverty, crime, and a low standard of living.

The Reimagine Delft project has five ingredients: an incubation center that trains agents, solid Internet infrastructure, furniture and hardware, contact-center software, and a soon-to-be-named BPO client. The goal is to eventually, with cloud-based contact center software, allow people to work from home to avoid the time and expense of traveling to a distant location to work.

When I spoke to Ayyoub, we discussed cities in the United States that might have a similar profile of high unemployment where he could begin to globalize the Delft plan. It's not often a business interview turns to social welfare, and it was a heart-warming change.