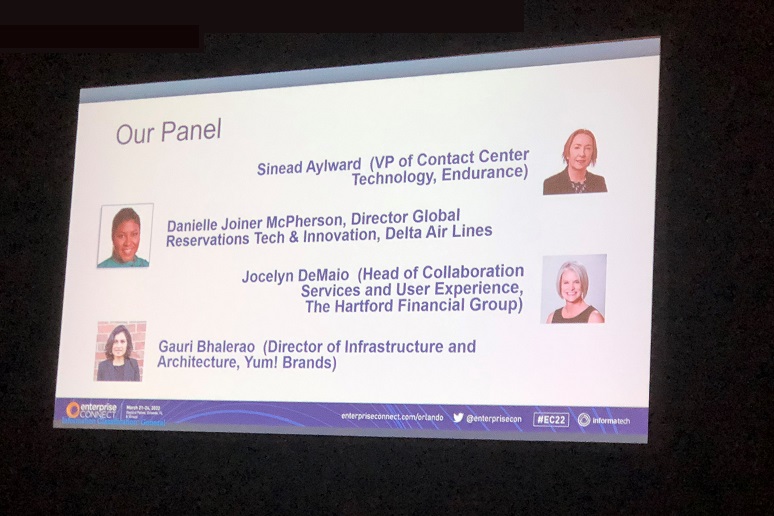 Image: Author
According to Deloitte Global, global technology firms will have nearly 33% overall female representation in their workforces by 2022, up slightly more than two percentage points from 2019. While the number of women in technical roles is expected to rise in the future, there is one female for every two males in the U.S. tech industry in the present.
During the session, “Women in Communications Roundtable: Spotlighting Excellence,” moderated by Lisa Schmeiser, chief editor, No Jitter, and program co-chair for Enterprise connect, four high-level women shared their expertise and explained why they’re often the only female in the room. They discussed how they built and advanced their careers, shared their experiences, and advised audience members on how to boost their own workplace performances.
One commonality: while all four panelists are now tech executives—and two won Enterprise Connect Spotlight Awards this year—none of the panelists originally planned a career in technology. Instead, the interests and strengths the women had developed as undergraduates in electrical engineering, environmental science, social work, or physics all transferred to careers in technology and communications. Another commonality among all four women: each of them was the change agent who initiated their company’s migration to the cloud right before—or during—the pandemic outbreak in 2020.
Sinead Aylward, VP of contact center technology, Endurance, and one of this year’s Spotlight Award winners, attributes her success in the IT industry to timing. But she encountered a “mental roadblock” when joining a company that used legacy technology. “I had to Google the brand to find out what it was,” Aylward said.
In February 2020, Aylward helped move her last set of agents into the cloud from legacy technology that didn’t work. Because every business case she put together was critical in some areas, it took a while to inspire people, to change, and tell them what was wrong. Another roadblock was a corporate cultural disadvantage around working from home, which retained “ a sense that the organization would implode.”
Another Spotlight Award winner, Danielle Joiner McPherson director global reservations tech and innovation, Delta Airlines, was wrapping up a case to retire legacy voice technology at her company in March 2020. She was responsible for implementing a “game changer” into its nine call centers. “So I started transitioning them into the cloud,” McPherson said. Though it was “ a tall order,” McPherson completed the challenge in nine months and the feedback was positive. “In the end, we were able to claim that this experience was designed for end users.”
A third panelist, Gauri Bhalerao , director of infrastructure and architecture, Yum! Brands, called out the importance of organizations investing in innovative technology because the younger crowd is going to go work for those doing so. After Bhalerao communicated this to her team, Yum! Brands was in the cloud. Bhalerao explained “and that was a big win for me,” Bhalerao said.
In January 2020, the fourth panelist Jocelyn DeMaio, head of collaboration services and user experience, The Hartford Financial Group, found herself in front of her Deputy CIO, Chinese Defense, and fought hard to get her organization in the cloud. She also found that moving to Microsoft 365 was a better decision for her company. After serious consideration, DeMaio’s organization received approval at the end of February 2020 and started migrating quickly after. The original plan was “we’re not going to migrate our business areas until the following June because we wanted to do it in one big bang,” DeMaio said. The obstacle DeMaio faced was convincing her executive leadership that it was the right thing to do. She explained how it was going to help the organization be better positioned in its market to move ahead in attracting talent. “Of course, they loved that … it was the best thing since sliced bread,” DeMaio added.
During the 45-minute discussion, nearly every panelist talked about grappling with imposter syndrome, then leaning into personal strengths like tenacity, confidence, and creativity to excel as an IT leader. "That's why I got interested in learning and interested in what everybody else was doing, and interested in not making a fool of myself," Aylward said.
Aylward also explained why she felt like an imposter. Partly because she realized she was taking a backseat when she had something to offer and partly because she wasn’t getting her word in on the conversation. She then recognized how one small personal act of pep talk or mental preparation goes a long way and advised attendees to define your strength, recognize it, remind yourself, and repeat. “I think you have to have some humility around what you need to know, and you have to invest in that,” Aylward added.
McPherson chimed in on the subject with words of encouragement, “Self-talk is important because what we tell ourselves is what we become and what we believe.”
Bhalerao applauded Aylward for calling out imposter syndrome on the panel because it’s something with which her team struggled. “It’s natural and human, so we have to call it out.”
If you missed “Women in Communications Roundtable: Spotlighting Excellence,” or registered attendees can catch the recap on-demand when available. Register today and view our full schedule here.