With its initial public offering, the video-first cloud communications provider seeks recognition of its leadership status in unified communications. 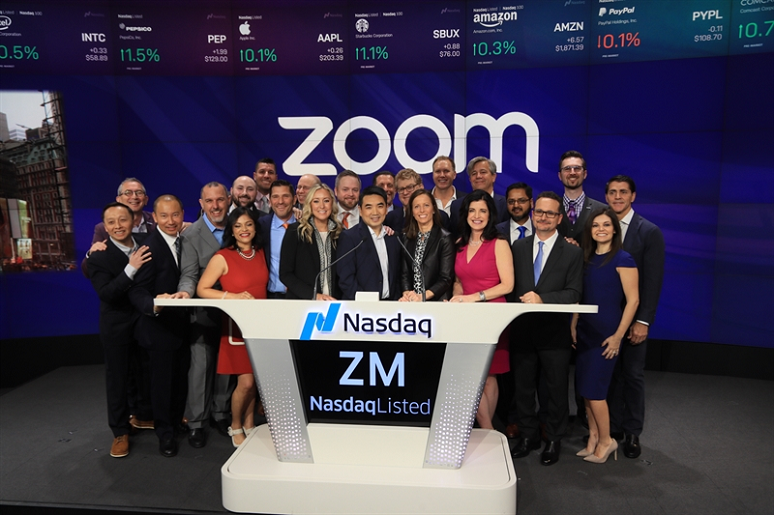 Zoom Video Communications solidified its status as one of tech’s hottest new companies, with an IPO today that saw the company’s shares surge to close 72% above its initial price, which itself had already been raised from the firm’s original plans.
The video-first cloud communications provider was originally considering a stock price range between $28 and $32 per share, based on investment the company had already received. But as interest grew in the runup to the offering, Zoom increased the range to $32 to $35 last week, and yesterday announced it would be pricing the IPO at $36 per share. That price valued the company at $9.2 billion, CNBC reported, noting that Zoom is valued at nearly 50 times its enterprise value -- “by far the highest multiple for U.S. software companies.”
Following Zoom’s Nasdaq debut under the ticker symbol “ZM,” the price soared by as much as 80% to a $66 per share high before closing at $62 a share, up $72% from the initial price.
Company officials were understandably pleased. “We want to keep ourselves grateful and humble and we want to keep doing what we’ve done so far,” Oded Gal, Zoom’s head of product management, told me.
Goal-Setting in the Public Eyes
Zoom’s goals in going public are more about company visibility and recognition rather than having much to do with raising funds, Gal told me. “We didn’t really need funding,” he said. “We were already profitable and had funds in the bank. This is about being more of a recognized company. The company feels more enterprise-grade for our customer base by being public.”
The company intends to continue down the path it started on last year when it expanded its video-focused portfolio into an end-to-end collaboration portfolio with the introduction of a voice offering, now called Zoom Phone. This product portfolio expansion is turning Zoom into more of a communications platform, with a suite of products that work together, Gal said.
“We’ll always be video first. We tackled the biggest problems first, by focusing on the video aspect, and now we’re adding other modalities,” he said.
And with the U.S. workforce now 35% Millennials, communication styles at work are changing, Gal added. These new workers bring new work styles and demand new tools, “so this new generation coming into work is impacting what enterprises are rolling out in their companies,” he said. In addition, office space is becoming more open and the workforce is becoming more distributed, but the need for face-to-face communication only gets stronger, he said.
This is one of the main reasons Zoom believes it’s important to lead with this video-first strategy -- to provide for this next-generation of worker but also to differentiate itself from the giants in the enterprise collaboration space, like Microsoft and Cisco, whom Gal couldn’t resist tweaking. He asserted that video can be treated almost as secondary with these larger players: “If you look at the UC space, we’re coming in as an independent, standalone company, and there’s been a lack of that in this industry. It may have held back innovation,” he said.

Can You Get to a Single Meeting App?

While standardizing on a single meeting app might be appealing, it will not eliminate the need to support alternative apps for external collaboration.

Tools for the Times: What Works When Working from Home

Practical tips on video collaboration and personal behavioral practices that will help employees get work done, avoid loneliness, and stay productive at home

What We Can Learn from the Zoom IPO

Competition will intensify, but as the company has shown all along, it’s not to be underestimated.