At its second-annual Zoomtopia user conference taking place this week in San Jose, Calif., video collaboration provider Zoom dropped a bevy of news, ranging from modest user interface enhancements to new partnerships and a foray into enterprise voice. In sum, today's announcements see Zoom expanding on its video collaboration backbone and rounding out its product suite to become an end-to-end enterprise communications provider.

While Zoom has become synonymous with cloud video conferencing, the company is making its audio debut with Zoom Voice, Nitasha Walia, senior product manager at Zoom, told me in a No Jitter pre-briefing. Zoom Voice is a cloud phone system that will be available as an add-on to the video communications suite. Developed internally, Zoom Voice will support inbound and outbound calling through the PSTN.

Although Zoom has provided, and will continue to support, voice calling through integrations with PBXs from companies such as Avaya, Cisco, and RingCentral, Zoom Voice will serve the needs of customers who want to consolidate with one vendor, Walia said. "It's not a typical PBX," she added. "It's a video PBX." Like they can within UC clients, Zoom users will be able to escalate from chat to voice to video.

Of course, video is still Zoom's primary focus, Walia said. "Voice is just another feature for us," allowing voice calling from within the Zoom interface while companies fully transition to video-first environments.

But just because Zoom recognizes a continued need for voice calling, don't expect it to get into the hardware phone business. Rather, Zoom is more likely to partner with device manufacturers like it's doing with its meeting room offerings (more below). Zoom does plan to function with existing desk phones in the future, Walia added -- "whether it's conference rooms or Zoom Voice."

The Zoom Voice beta is available today to select customers, with general availability expected for North American customers in first-quarter 2019 with support for localized telephony services in 16 countries. It will continue to roll out globally over the course of 2019. 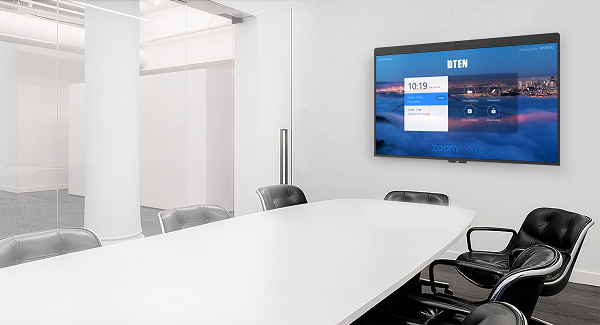 Zoom has also made several Zoom Room enhancements. Multiple users in a Zoom Room can now simultaneously share content, for example, and they can manage how that content is displayed in the room using the Zoom Room Controller.

Additionally, the Zoom software now includes audio processing, enabling it to apply machine learning for iterative audio enhancements, Zoom said. With Zoom Audio Processing, microphone streams are received by the system individually, then enhanced with echo cancellation and noise suppression as they're mixed in real time. Select microphones have this capability today, with support coming soon for microphone arrays on hardware devices from AVer, DTEN, and Suirui.

Further enhancements include the ability to start Zoom Rooms meetings on mobile phones with one click from within the Zoom mobile app, and more administrative control for managing and troubleshooting Zoom Rooms and digital signage content delivery.

Beyond the meeting room, Zoom has made a series of enhancements to the user experience. It has increased the default video participant capacity for the basic/free plan to 200, and will automatically upgrade customers with the Large Meeting 200 plan to the Large Meeting 500 plan at no cost. This change will take place by year's end.

Zoom has also improved its virtual background feature, which enables users to display an image as their background during a video call, to work without a green screen. This functionality is available now for mobile users on iPhone 8 or later models, and will be available with the Zoom desktop software by the end of the year. Additionally, Zoom has enabled users to control Zoom meetings via their headsets, available now for some Plantronics and Jabra headset models, with more models and providers to follow, Zoom said.

In addition, Zoom has added an audio signature that, when enabled, would embed users' credentials into their unique audio tracks. Also available by the end of the calendar year, this feature is aimed at helping IT teams track audio data leaks back to an individual user.

Lastly, Zoom announced strategic partnerships with Atlassian and Dropbox, both involving investment in the co-development of integrated embedded workflows. These strategic partnerships are the latest moves for Zoom in building up its App Marketplace to host integrations it has built with third-party developers. "While Zoom has always had APIs available, we're taking that to the next level -- which is a platform," Walia said. The marketplace includes apps for assistants, productivity, scheduling, and unified log-in, Zoom said.

To start, Zoom's App Marketplace includes 30 to 40 apps and bots from companies like Clara Labs, Egnyte, HubSpot, Hugo, Microsoft Teams, Otter.ai, Slack, and Theta Lake -- all of which Zoom has vetted for security and user experience requirements.