Ultimately, a communication experience is good if a user says it is, making Rate My Call data a good starting point for analysis.

Everyone who has deployed Skype for Business hopes their users have good calls. But what's good?

Many rely on audio quality to determine if a call was good. Most often this is based on the measure of mean opinion score (MOS). MOS is usually measured on a five-point scale, from Bad (1) to 5 (Excellent). Originally MOS was calculated based on subjective ratings gathered directly from users. Impractical as conducting subjective tests of voice quality for a production communication system is, MOS is more typically estimated algorithmically.

Microsoft's Skype for Business tracks MOS for several measures, broadly categorized as either "Listening Quality" (MOS-LQ) or "Conversation Quality" (MOS-CQ). Most VoIP vendors report MOS-LQ, which only measures the quality of the audio stream and doesn't take factors such as delay or echo into account. MOS-CQ considers bidirectional effects, accounting for listening quality in both directions.

Specifically, Skype for Business reports on:

For many of the MOS scores, a best practice is to look at trends (is value moving up or down?) as opposed to focusing on achieving a specific target value.

In contrast to user-calculated MOS scores, the Skype for Business Rate My Call feature allows the capture of direct user feedback (see my related No Jitter post).

However, as our research has shown, the challenge is that predicted MOS-LQ scores don't correlate strongly with user quality ratings for calls. For instance, below is an analysis of MOS versus Rate My Call feedback across 10 different organizations representing a population of more than 100,000 users. Clearly, an increase in MOS doesn't correlate with a reliable increase in a user rating for the call. 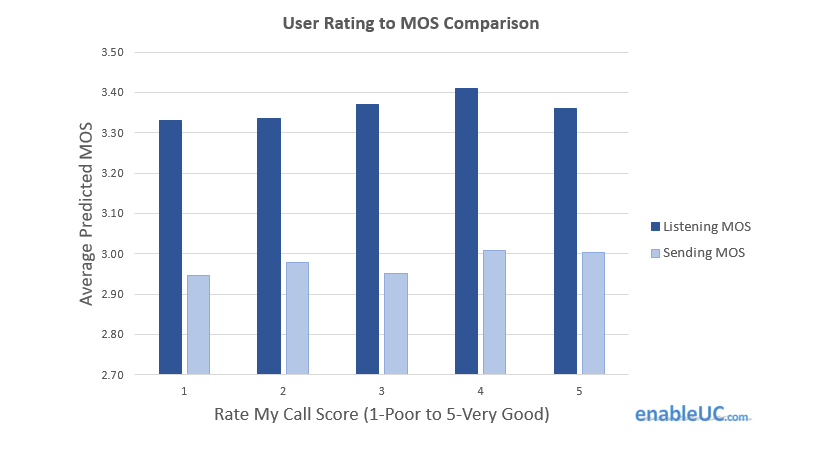 Continue to Page 2: Beyond MOS, and more