IP telephony costs are generally declining, but implementation costs are increasing. Meanwhile, movement to the cloud for IP telephony and unified communications is in full swing -- though cost savings may not match conventional wisdom, according to Nemertes' annual study of IP telephony and UC costs.

Overall, costs for IP telephony, by vendor, are leveling off. In years past, costs for the lowest-cost provider were up to three times lower than those for the highest cost provider. Costs are declining for nearly all the vendors included in the study.

Here are the research highlights, by vendor: 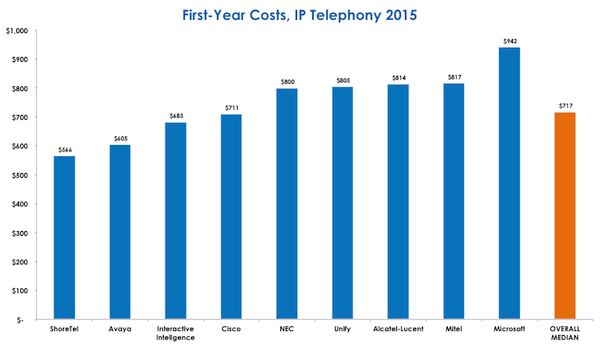 IP Telephony
Overall, on-premises IP telephony costs are dropping by 20% to 40%, depending on the size of the rollout. Lower capital costs, reflecting a highly competitive market, along with lower operational costs, are driving that decrease.

But implementation costs are increasing in line with time spent planning and engineering systems. IT leaders say new IP telephony implementations or upgrades are not as straightforward as they once were. Now as they engineer their systems they must consider factors such as integration with UC and collaboration apps, mobile enablement, and SIP trunking. That takes more time -- and money -- for internal resources and external consulting. Median cost per endpoint has increased from $61 in 2013 to $108 in 2014.

Unified Communications
Not surprisingly, the UC space is quite active. Those using cloud UC increasingly are identifying with communications service providers, including those they specifically named -- AT&T, Verizon, and Windstream.

One of the biggest cost surprises was that companies are not spending less on internal staffing when they move to the cloud -- at least not yet. They spend, on average, $224 per end unit to operate on-premises UCC deployments. But they're spending $252 per end unit to manage their cloud deployments. Based on our interviews, we anticipate that figure to decline in the coming few years as deployments stabilize and relationship management solidifies. But for now, organizations are devoting the same or sometimes more staff members to operate cloud UCC and cover vendor management, training, support, and strategic planning.

In past years of this research project, Microsoft generally was a high-cost provider across the board. Indeed, this year, Microsoft's costs remain highest for IP telephony (though they are declining). Its UC costs, on the other hand, are among the lowest. This signifies a reduced learning curve as more organizations have Lync deployed and in use.

On average, companies spend $15.44 per month on cloud UCC apps, and they use 3.87 apps (meaning, any combination of IM, presence, Web/video/audio conferencing, email, document sharing, etc.).

I will be presenting more details on this research next week at Enterprise Connect 2015 in Orlando. Join me for the discussion, "Real-World TCO for Unified Communications," bright and early on Wednesday, March 18, at 8:00 a.m.