Polycom and Zoom, longstanding competitors, today announced a partnership to put the customer experience first, relegating opposition to a back seat. The pair of video giants are rolling out Zoom Connector for Polycom, a new capability allowing users one-click access to Zoom meetings from Polycom video solutions.

Zoom Connector for Polycom is targeted at mutual customers, with the goal of creating a more "frictionless experience" for them Eric Yuan, Zoom CEO and founder, told me in a recent briefing on the news. "A lot of customers are already using both Polycom and Zoom, and our customers have been saying they want us to work together."

The new solution works for Polycom RealPresence Debut and RealPresence Group Series room systems, enabling customers to join a Zoom meeting with a tap to the Polycom touch screen. Other key features of Zoom Connector for Polycom include calendar-based integrations for Outlook, Google Calendar, and iCal; HD video and audio; and wireless screen sharing. Because it's a native integration customers don't need to purchase any additional hardware or controller to take advantage of the capabilities, and users can participate in video meetings with both internal colleagues and external contacts, using any device be that mobile, desktop, or other room systems, press materials state. 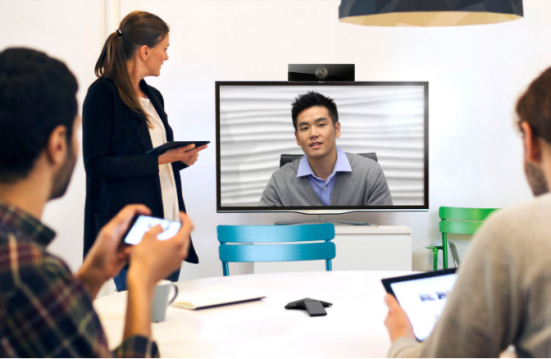 While Polycom agrees that providing a frictionless experience is a top goal of this partnership, "the biggest opportunity in front of us is to drive more adoption of our respective video offerings," Karthik Arumugam, VP of strategy and business development at Polycom, told me in a phone briefing. "Video conferencing is still viewed as something that is complicated and a little intimidating, if you will. But software is making a big impact, and some of the barriers for adoption are going down. Zoom has probably the greatest momentum when it comes to video service players, and we're leveraging that momentum to help drive adoption."

For the traditionally infrastructure-focused Polycom, the partnership provides another link to a cloud service, a path the company started down a few months back around Enterprise Connect when it announced RealConnect for Office 365, a video interoperability service connecting Polycom video conferencing devices to Skype for Business Online.

These two partnerships taken together give Polycom somewhat of a cloud strategy, although, Arumugam said, the company is not planning on offering any direct branded video service in the foreseeable future. Rather, Polycom's cloud strategy is to work with what it sees as complementary partners, like Microsoft and Zoom.

Zoom has seen significant growth in the roughly five years it has been in operation. It's now valued at $1 billion, and in the March timeframe secured $100 million in unsolicited funding from Sequoia, Yuan told me. He pointed to a March Okta report that identified Zoom as the fastest-growing business application.

In terms of the Polycom partnership, Zoom sees itself as a way to help customers with legacy video hardware in place. "All that old hardware does not talk to the cloud," Yuan said. "We can help by becoming a window to empower existing devices to connect to the cloud."

Ira Weinstein, senior analyst and partner at Wainhouse Research, likes this partnership. "We view this as a win for both Polycom and Zoom customers, and we expect to see even stronger integration between these platforms in the futures," he said in a prepared statement.