Takes steps away from infrastructure toward becoming a stronger, more innovative endpoint company.

When Polycom went private in July 2016, it was clear that the company needed to do something different to jump start it back into growth mode. Its infrastructure business was the anchor for the company, which was sinking faster than the NY Jets chances of making the playoffs.

Making a significant strategy change as a publicly traded company is very difficult. Now that it's private, it's able to move in a new direction more easily. The new strategy laid out upon going private was to de-emphasize the infrastructure business and become a stronger, more innovative endpoint company. This has caused some confusion and there are many rumors that Polycom is getting out of infrastructure altogether -- that's not the case, but there's certainly more focus on endpoints as of late.

Over the past couple of years the company has rolled out a number of new products, including the recently announced Pano, Debut, Centro and Trio, which was the first significant upgrade to its conference room offerings in a long time. This week the company announced a couple of new conference room endpoints that should expand its market opportunity.

Even though more people are working from home and on the road, the demand for meeting spaces has grown. Digital transformation requires worker agility, so more people are meeting in a wider variety of rooms. Conference rooms used to be very cookie cutter and used only for periodic, scheduled meetings; but now agile teams come together quickly, get some work done, and move on to the next thing.

This shift in working habits has caused the variety of rooms to expand as well. Instead of having your typical eight-to-10-person room, businesses are now creating open meeting spaces, huddle rooms, large rooms, and small workspaces. Last year I visited a local reseller in the Boston area that has a show room with perhaps a dozen different types of workspaces, many of which are flexible so a medium room can be turned into two huddle rooms, for example.

Each of these rooms typically needs some kind of phone and other equipment in it. A worker could use their mobile device, but they aren't ideal for long calls as the quality is still lacking. However, one size doesn't fit all so something like the existing Polycom Trio 8800, with its premium pricing, may be too expensive to put everywhere. 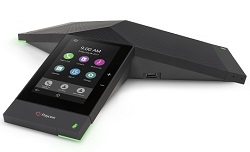 This week Polycom announced a couple of new endpoints that address the needs of smaller and flexible meeting spaces. The first is the Trio 8500, which as the name suggests, is a lower cost version of the Trio 8800. Like the higher-end model, the 8500 has the same 5" color LCD screen, incorporates a noise block feature, can be powered over Ethernet (PoE), and is certified for Skype For Business. Where it differs is that the 8800 has a microphone pick-up range of 20 feet, where the 8500 is 14 feet. Given the new Trio is designed for smaller rooms, that distance should be more than enough. Additionally, the 8500 does not support Wi-Fi connectivity, has a separate base port, and has limited camera options. The list price for the 8500 is $1099, which is about a third less than the 8800's price of $1599.

The biggest opportunity for the Trio 8500 is in Skype For Business meeting rooms. With its regular IP phones, about 70% of them are shipped through UCaaS providers, meaning only about 30% are for Skype for Business/Office 365. With Trio, the numbers flip -- 60% are deployed in Microsoft rooms and the other 40% are service provider or Open SIP driven. This may look odd, but it does make sense, as smaller businesses have been the low hanging fruit for UCaaS providers, and these companies have less meeting rooms and often use regular IP phones as they don't need quite as sophisticated a device.

The other endpoint announced is more of a "pro-sumer" device. The VoxBox is a portable Bluetooth/USB speaker that allows users to hold conference calls anywhere. It's important to note that this isn't an off-the-shelf type of speaker phone one buys at a consumer electronics store. The VoxBox has a number of advanced features such as HD voice, NoiseBlock that mutes the microphone when users stop talking, and a four-microphone array for increased audio quality. These devices are ideal for open spaces, telecommuters, home workers, or anywhere else where someone might want to have a good quality conference call.

These new devices alone aren't going to change the fate of Polycom, but they're more bricks in the wall that demonstrate Polycom is executing on the plan it laid out. Over time Polycom's goal should be to use Trio and other similar devices to be the "brains" of meeting spaces and control things like lighting, HVAC systems, and other things that are part of meeting spaces. That would make Trio a much more important part of a conference room instead of being viewed as phone.