By focusing on interoperability, Polycom's bringing its arsenal of advanced features to one-time competitors in a win-win environment.

Until more recently, Polycom hasn't launched or announced much this year. So, when I recently ran into Polycom's co-founder and chief evangelist, Jeff Rodman, I asked him if he was bored. He confidently assured me that a new Polycom is about to emerge.

Jeff's streak of prescience continues. Polycom seems to have suddenly re-emerged with three major announcements in as many weeks. But before diving into those announcements, let's take a quick look at Polycom's evolution over the past year.

You may recall that it was last September when Siris Capital acquired Polycom and took the company private. In doing so, Siris thwarted a planned merger between Polycom and Mitel, and named Mary McDowell as the company's new CEO.

I met McDowell soon after she started last October at the Polycom PACE event. She's been through several high-tech acquisitions and integrations including Compaq's acquisitions of Tandem and DEC, and then HP's acquisition of Compaq. She jumped over to Nokia in 2003, where she grew revenue in the feature-phone side of the business despite its post-iPhone collapse. She credited that success with a focus on quality and partnerships.

In her new role, McDowell explained that Siris believed Polycom had strong potential for growth, but as a public company it was trapped in the pressure cooker of quarterly results. Her plan was to reduce external pressure so it could reorganize and mount new, longer-term initiatives, specifically intending to focus on interoperability, device management, and analytics.

Evidence of the interoperability focus has emerged in two of the three recent product announcements. The other announcement was a new product (and category):

The path Polycom took to accomplish this sounds familiar to the journey Polycom took with SfB phones. Polycom's original phones for Lync, the CX series, were proprietary phones designed by Microsoft. These desktop endpoints were separate from Polycom's existing line of SIP phones. Eventually, Polycom developed software for its SIP phones to make them compatible and certified for Microsoft's environment. Polycom has repeated this process with video, as it developed Group Series software to participate in native SfB conferences.

Polycom is not the first company to create interoperable video software for SfB, but it is the first to earn certification from Microsoft -- likely in part due to its 14-year partnership. The Group Series solution will be added to Microsoft's TechNet site and the SfB Partner Solution Catalog for SfB Online/Office 365.

To be clear, there are no immediate impacts to Polycom's other existing and announced solutions for SfB, which include the new Skype Room System (in development), the MSR series, and the RealConnect for Office 365 gateway service.

It's an interesting twist on its Microsoft relationship, which has been overall positive for Polycom, but was forcing it down a hardware-centric path that didn't optimize its talents and resources.

Last week Polycom introduced Pano, essentially a board-less digital whiteboard. It is a new type of product that provides a purpose-built appliance for digital content sharing.

Content sharing is a staple of video conferencing, but that doesn't address all the rooms and businesses without video infrastructure. Pano supports up to four video sources and connects to a standard display or touchscreen, allowing users to instantly and wirelessly share content from MacOS, Windows, Android, and iOS devices using either Apple Airplay or Miracast. 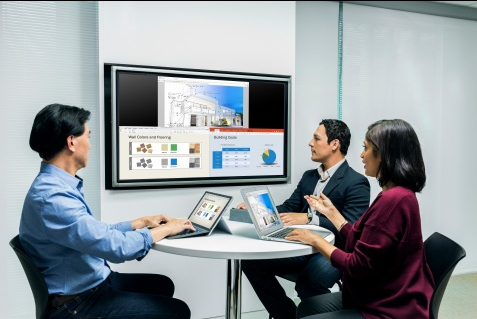 Pano can also be used as a digital whiteboard when connected to a touchscreen. It can provide a blank canvas or accommodates annotations on shared content. Overall, Pano is a low-cost content sharing solution that updates and simplifies presentation and content sharing capabilities of offline conference rooms. There is no camera, and it's not a video solution, but since it has a standard HDMI output it can be connected to most video conferencing solutions, thus providing a consistent and familiar approach for content sharing across environments.

All this together, I believe Rodman was telling no lies when he said a new Polycom is emerging, with new leadership and a commitment to interoperability that has the company forging partnerships with those once considered competitors. It's too early to determine the success of this strategy, but it looks reasonable.

Visual communications continues to increase in various forms of enterprise communications, but the model is changing. Elaborate, full-featured video conferencing rooms no longer function in isolation. By focusing on interoperability, Polycom is returning to its roots of innovative solutions that complement other solutions enterprises may also be leveraging.

Polycom's neutrality on call management, for example, made it friendly with most UC companies. Now, it's bringing its arsenal of advanced features such as Eagle Eye camera automation to one-time competitors in a win-win environment.