This first Microsoft-branded smartphone is aimed at the exploding market for low-cost devices in the developing world.

The Lumia 535, the first smartphone to carry the Microsoft name rather than the Nokia brand, has arrived. Overall the specs are respectable, but the price, at roughly $125, is impressive.

Clearly Microsoft is not looking to go toe to toe with Apple and Samsung at the high end of the market, at least not with this model. Rather, it is looking at serving the exploding market for low-cost smartphones in the developing world where unit sales could hit the billions.

This strategy is the same I've been writing about for the last year, with smartphone makers like BlackBerry, Motorola, and Samsung churning out lower-cost models aimed at the cost-conscious market (see New Fashion in Smartphones: Cheap). Sure, many people in rich countries can fork out $600+ for a high-end, leading-edge smartphone with all the bells and whistles -- even if the majority only pay around $200 for a contract-subsidized one. But such spending on smartphones is not the case in places like China and India, the two largest smartphone markets in the world.

As I've said, the Lumia 535, which will be available in a dual SIM model in some markets, has decent features. But keeping the price down meant Microsoft had to back off some of the leading-edge components. While its 5-megapixel front-facing camera outguns the Apple iPhone 6 and Samsung Galaxy 5, shining for selfies, the phone really lacks on the connectivity front. For Wi-Fi, the Lumia supports single-band 802.11b/g/n, while the iPhone and Galaxy provide dual-band 802.11a/b/g/n/ac. Over the cellular network, the Lumia's WCDMA interface tops out at a download speed of 42.2 Mbps while the others have LTE Advanced chipsets capable of supporting downloads at 150 Mbps. 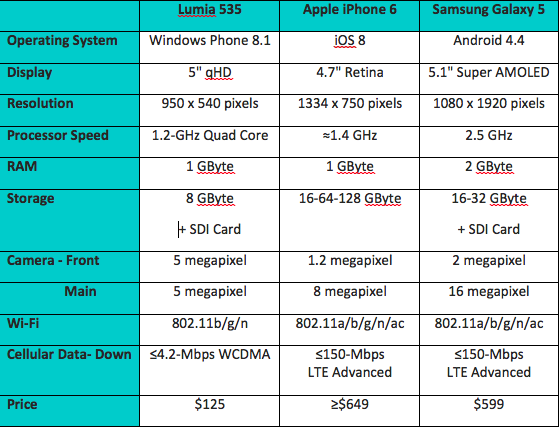 Windows Phone has had little uptake in the US market and sits at about 3% worldwide, so aiming at the low end of the market is a solid strategy. The strange thing is that the major appeal of Windows Phone in the US has been its tight integration with the full Microsoft productivity suite; I have to wonder what value that will have in a consumer market that's all about selfies and social media.

In my testing I've found Windows Phone to be a decent operating system, with its fairly unique active tiles concept and significantly improved security profile over previous versions. Packing that in a low-cost device targeted at fast-growing markets in developing nations is a smart move for Microsoft -- though Android is strong in those areas as well. Of course, consumers do have a tendency to lean toward domestic or local suppliers, but Nokia has traditionally done well in these markets.

The Lumia is no iPhone killer, but "hit 'em where they ain't" is still a winning strategy.

2021 IT Heroes: Sharing a Vision of Excellence