This list should help you keep track of the myriad ways to connect IoT devices to network infrastructure.

The Internet of Things (IoT) is made up of smart devices that communicate over the Internet. How they connect to the Internet varies depending on the end device and its application, and the number of connectivity solutions is expanding. Some IoT devices rely on short-range wireless, while other use long-distance wireless connections. Others connect over wired Ethernet networks. Some connectivity solutions are designed for consumer networks and others for the industrial Internet.

In this blog I'll be focusing on the network connection requirements, but connectivity also expands into the applications as well. For more on that topic, see my previous post, "Peeling Away the Layers of IoT Interoperability." Or, if you're new to IoT, read my posts "Are You New to IoT?" and "IoT: More Than Just Technology."

There are three primary criteria for IoT devices: 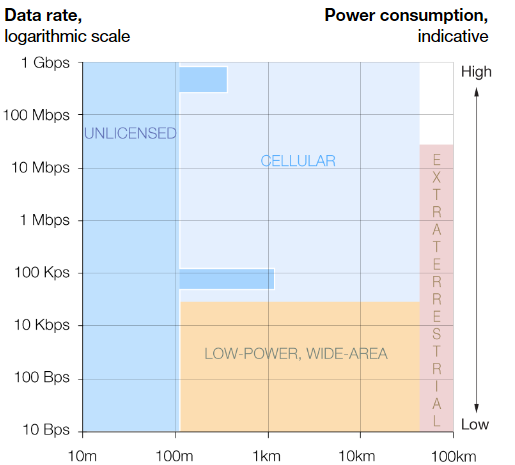 Source: "The Future of Connectivity: Enabling the Internet of Things," McKinsey & Company

The Range of Connection Choices

Connectivity options will vary based on which vendor made the endpoints and the platforms. Some IoT devices are for internal use only, while others are available to the public. You might find as many as 30 different connectivity options based on bandwidth, range, cost, reliability, and network management features.

Fog or edge computing, which processes data at the endpoint before feeding the network, will also affect network requirements, especially bandwidth (see "IoT at the Network Edge").

Several IoT groups are producing standards, some covering the networks and others dealing with application interoperability (see "IoT Standards: Many, Not One"). What follows is a list of some wireless IoT network options:

The Strategy of Choices

You need to develop a strong, cohesive strategy. When you develop a strategy, you should: Except that you must work with multiple IoT connectivity standards; focus on the simplicity of standards and connection choices; and consider new business models and look for ubiquity.

Learn more about IoT at Enterprise Connect 2018, March 12 to 15, in Orlando, Fla. Register now using the code NOJITTER to save an additional $200 off the Advance Rate (expires Friday, Jan. 12!) or get a free Expo Plus pass.