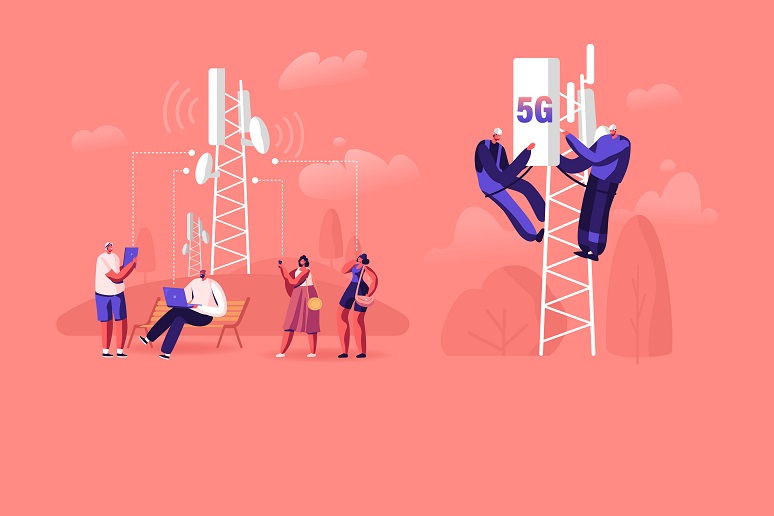 Unless something changes, private 5G will have to focus on smaller, more specialized markets where the potential advantages listed above may have value.
● Wi-Fi Also Has a Lot Broader Ecosystem: The basic thing to remember in wireless today is, “Everything connects to Wi-Fi.” While devices like smartphones and some laptops and tablets support both, there are lots more devices that have Wi-Fi but no cellular capability, and that number is growing every day. The entire consumer IoT market from Nest thermostats to Ring doorbells, Amazon Echoes, and the rest all run on Wi-Fi.

While we do have cellular modems from companies like Cradlepoint and Sierra Wireless to connect almost any device to cellular, that’s another cost. Wi-Fi capability also allows professional users to roam from the office Wi-Fi network to their home Wi-Fi.
● Lots of People Know How To Make Wi-Fi Work: A key part of the Wi-Fi ecosystem is the base of channel partners who know how to deploy it in challenging indoor environments and maintain it once it’s there. By the way, it took years to develop that base of expertise, so you might want to factor that into your timetable.
● Need 5G Base Stations Designed for Enterprise Networks: In shopping for enterprise Wi-Fi we have lots of good choices from enterprise focused companies like Cisco and HPE. Some private 5G vendors like Celona make their own base stations (i.e. “access points”), but most of the reports (and complaints) we’re seeing from the private 5G field trials indicate that they are trying to deploy private 5G using equipment designed for carrier networks. Having worked in both environments, I can assure you, this is not a path you want to go down unless you’re prepared to spend a whole lot on training.
● Private 5G Has To Fit In the Environment: Enterprise IT departments need solutions they can deal with, along with the myriad other systems, services, and networks they are responsible for. Reports for early adopters indicate that the carriers have major gaps in their understanding of how enterprise IT departments work; in reality, the cellcos’ have more enterprise contacts in the purchasing department than in IT or anyone else who might be buying a private 5G network.
Potential Winning Scenarios
While I don’t mean to discourage anyone from taking on the private 5G challenge, the adventuresome should know at the outset that they’re climbing a steep hill. The private 5G challenge is even tougher because you will have to build the entire ecosystem. The Wi-Fi Alliance was able to do that -- however, when Wi-Fi first appeared in the 1990s, it was in response to a real unmet need. That’s not the case here.
However, I can foresee some possible winning scenarios.
● Hitch a Ride on Wi-Fi: The easiest road to enterprise would be to talk one of the big enterprise Wi-Fi vendors into incorporating a private 5G capability into their existing Wi-Fi access points. In other words, just adopt the 5G radio link for devices that need it, and get that traffic onto the customer’s existing wired infrastructure. I’m sure the Wi-Fi vendors are mulling over this opportunity, and it will be interesting to see if they bite. They do have some expertise in this market after all.
● Solve The DAS Problem For 5G: In an earlier piece, I talked about an idea I first heard about from private 5G maker Celona, which was the possibility of using a private 5G/LTE network as a type of distributed antenna system (DAS) to improve indoor coverage for the public cellular carriers. While this idea doesn’t seem to produce any obvious synergies, it certainly addresses an unmet need for better indoor voice coverage.
● Identify Niches Where Cellular Advantages Have Meaning: This seems to be where most of the trial activity has been, particular in industries that require covering extensive outdoor areas like airports and shipping terminals. The problem with this is the cellular business is a big revenue business and you’d need a lot of these niches to add up to a sizable enough market to make an impact.

Conclusion
Any time I think what we’re trying is flat out impossible, I remember the time I met Rob Carter, EVP and CIO of FedEx in the speaker’s lounge at some industry event. While somewhat humble about his accomplishments, this is the guy who headed up the project to develop and deploy his company’s COSMOS wireless package tracking system. I was working in wireless by 1986 when it introduced the first SuperTracker handheld barcode scanner, and it flat out blew our minds.

To pull that job off at that point in time, they had to develop the terminals along with the back office systems then shop around for a hodge-podge of low capacity wireless data services (we’re talking about ARDIS and cellular CDPD services delivering round 4800 bps) – in short, nuts crazy ahead of its time. But they pushed ahead because they had the vision to see the impact this capability could have on their business, and this self-effacing Florida Gator led the charge.
We can still do great things in this business, but accomplishing great things often involves both creativity and great effort. I’m looking forward to what 2022 holds for private 5G and for the wireless industry at large.