How Are We Doing With 5G?

5G deployments and adoption in the U.S. seem to be meeting expectations—move the goalposts 70 yards and call it a touchdown. 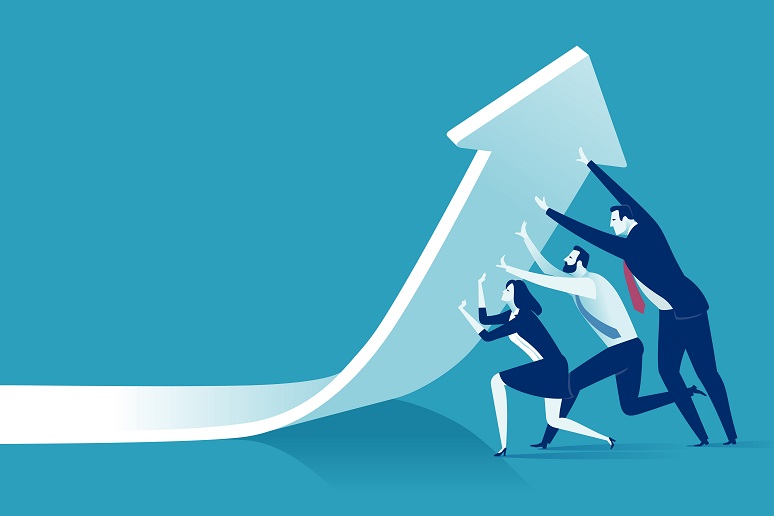 Image: bizvector - stock.adobe.com
Cellular carriers have attempted to create a groundswell around efforts to upgrade their networks to fifth-generation (5G) cellular technology. But for the most part, the market has greeted the predicted revolution with something short of a tired yawn. The carriers are moving forward with their 5G rollouts, and virtually all new high-end smartphones include 5G capability, including the much-heralded millimeter-wave variety, as standard. Despite the advertising spend, we see few buyers (i.e., except those with a strong desire to be on tech’s leading edge) changing their upgrade plans and rushing an upgrade to get what 5G has to offer.
Frankly, when you look at 5G, you have to wonder why it would merit any advertising at all. First off, all of the carriers will have to adopt it anyway to remain competitive; scratch “competitive advantage.” Second, as we’ve seen, competitive pressures will force them to give a new capability away for free (i.e., no price premium for 5G); nix “revenue enhancement.” Because all of the new chipsets will include 5G (as well as a fallback to 4G LTE and 3G modes), we will all eventually get to 5G.
However, the carriers promised new capabilities. Specifically, ultra-reliable low-latency communications (URLLC)—boy, those cellular guys can sure come up with a catchy name!—and massive machine type communications (mMTC) for ultra-dense Internet of things (IoT) applications. Neither has seen the light of day, and we’re now finding that their deployment will call for a whole new 5G standalone (SA) core network. The first initial implementations of those 5G SA networks are only now beginning. So, if we’re looking for “new market opportunities” as a justification, we’d better move that to the list of really long-term benefits.
With increasingly indistinguishable service offerings, the cellular utilities have become immersed in a constant advertising battle over the relatively small percentage of cellular customers who will change carriers each year. So, if you’re advertising anyway, at least 5G is a good theme.
As more enterprise users become mobile, enterprise buyers should think more strategically about their mobile service transactions, as lost connections represent lost business opportunities. Here are my recommendations for those buyers.
What Exactly Was 5G Supposed to Be? 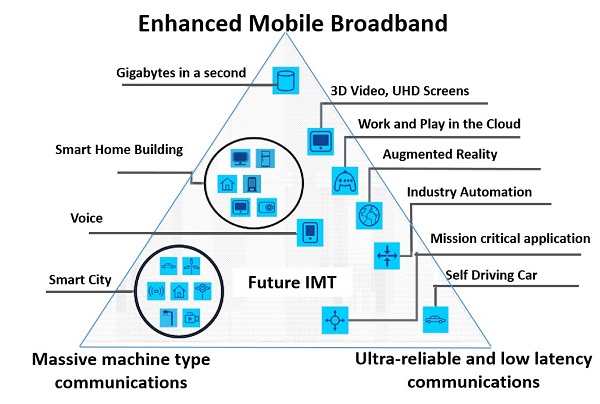 Image: 3GPP
The original 3GPP description of 5G identified the following three primary service types to be offered:
From a big picture perspective, the carriers have fallen pretty short in the promised-and-delivered category. For now, they seem to have shifted the advertising to indicate that enhanced mobile broadband was all this was about in the first place.
If enhanced mobile broadband is all that’s available for the time being, we should at least take a look at how it performs in that regard.
How ‘Enhanced’ is Enhanced Mobile Broadband?
When it comes to increasing wireless transmission rates, there are only two paths to pursue: get wider or get smarter. To get wider means that you use a bigger channel to carry the signal; in wireless lingo, “bigger” refers to a channel that occupies more radio spectrum. The carriers use licensed radio spectrum almost exclusively, so getting to “wider” involves significant capital expenditures. The U.S. mobile operators have been spending hundreds of billions of dollars acquiring spectrum licenses as they become available.
Getting smarter means coming up with all sorts of neat technology tricks to squeeze more bits per second of digital transmission capacity out of each precious cycle of radio spectrum. The challenge to that is interference, specifically the signal-to-noise (S/N) ratio. All other things being equal, the more bits you try to squeeze in, the more susceptible the signal will be to interference on the channel. The 5G standards incorporate a whole laundry list of technical tricks to optimize performance while minimizing errors.
In the old days, interference meant data errors at the receiving end (e.g., noise on voice calls). Today, however, devices are smart enough to recognize the problem and automatically decrease the data rate, so the impact is poorer performance.
Will My Users Notice The Difference?
The users who would notice a change are away from Wi-Fi (the default choice for data, if available) and must rely on the cellular data service. For now, the carriers are still in the process of rolling out 5G, so you might still be in an area with only 3G or 4G service. If you’re in a 5G coverage area, network performance primarily depends on whether you’re in the wide area and served on the slower sub-6 GHz service—or one of the hot spot areas supported by the carriers’ shorter-range 5G millimeter wave service.
In the cellular world, the performance boost we’ve come to expect with each new generation of technology is 10x. From 3G to 4G, we went from download speeds of one megabyte (M) to 10 megabits per second (Mbps), and with 5G, we expect eMBB downstream rates of 100 Mbps.
They haven’t quite hit that yet, but research firm Open Signal reported downstream rates between 48 M and 71 Mbps with an average of 58 Mbps (see image below), so it’s at least halfway there. Users in 5G coverage areas are indeed getting something in the order of a 5x performance boost.

That performance is considerably better on the carriers’ millimeter-wave networks, which act like high performance-limited range hotspots in heavy usage areas. Verizon took the prize with its 5G Ultra-Wideband service registering 693 Mbps downstream (see image below) while the others registered below 250 Mbps. Verizon still came in with the slowest average downstream rate (48 Mbps). 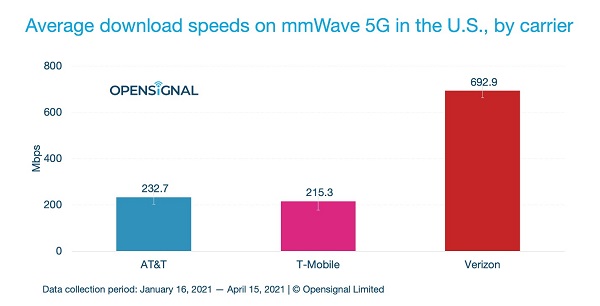 However, according to OpenSignal, the localized nature of the millimeter-wave services means they represent a relatively small portion of the carriers’ 5G traffic. Verizon’s millimeter-wave utilization was highest at 0.8%, but that’s still less than 1% of their 5G traffic—I don’t think it mentions that in the ads. 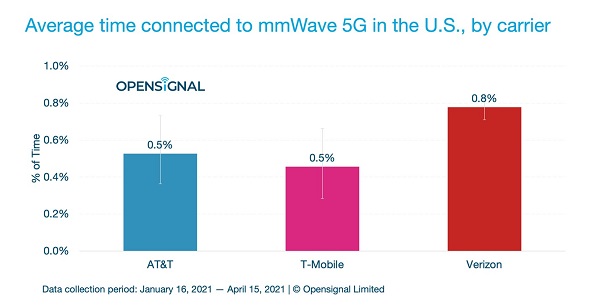 I always caution clients not to put too much reliance on any of these cellular performance comparisons (i.e., “Your mileage may vary”). We regularly find significant differences in the results published by the different research outfits, and they all change over time anyway. In short, cellular data performance is creeping upwards. As more users upgrade their devices, 5G should support videoconferencing and virtually any other app we’re currently using with better performance.
Future Expectations
The vision of 5G seems to have shrunk from this new network capable of supporting a wider range of application requirements (like autonomous vehicles and massive IoT deployments) to a routine (though significant) upgrade of the mobile data service they’ve been selling since the days of the 2G GPRS and 2.5G EDGE services.
The reality is that you can’t expect too much from organizations that are as big and cumbersome as our mobile operators. It didn’t help that AT&T and Verizon pursued expensive debacles in the entertainment and information services businesses, respectively. With their visions of glory dashed, perhaps the carriers may return to the idea of simply being better utilities. However, hauling utilities around is about as challenging as making a 180-degree turn with a container ship in high winds.
In the end, the carriers have succeeded in lowering our expectations about what they can deliver. The real concern we have lies with the amount of licensed spectrum they now control, and the speed of progress in the mobile space may slow to match the pace of the carriers. Enterprise buyers beware.
To learn more about management, networks, and security, join Michael Finneran at Enterprise Connect September 27-29 during his “Mobility Update: Where Are We With 5G & Other Technologies?” session. Register now using the promo code NJAL200 to save $200!