Twilio Flex to the Rescue for Trek Medics

Sheila McGee-Smith
Just as it did last year, Flex, Twilio’s contact center solution, is getting the spotlight at this year’s Signal, the company’s annual customer and developer conference taking place this week in San Francisco.
Twilio is offering plenty of new information on Flex, which became generally available at this same event last year (after its unveiling at Enterprise Connect months earlier). During a keynote yesterday, Jaime Gilliam-Swartz, vice president of voice of customer and support operations at Lyft, provided an update on the company’s Flex deployment, which began in November 2018. In addition, the Signal conference agenda includes 14 sessions with Flex in the title, from customer and partner stories to workshops. An additional seven sessions feature contact center content, several addressing analytics and the operational aspects of using data to run a better contact center.
While I’m unable to attend Signal in person this year to get my Flex fix, I was lucky enough to interview one of the customer speakers ahead of the event: Jason Friesen, founder and executive director at Trek Medics, a nonprofit humanitarian organization dedicated to developing pre-hospital and emergency care in low- and middle-income regions. I spoke with Friesen the week after tropical storm Barry threatened Louisiana, where Trek Medics worked with volunteer community-based response groups.
Trek Medics works with various local and national organizations around the world -- rural fire departments in the Dominican Republic, for example, and community health worker groups in Tanzania, Friesen said. As he explained, most developing countries don’t have 911 services or other emergency response networks, leaving residents with limited access to rapid medical care. The issues touch on both sides of emergency communications. First there is call intake, which is how the public calls for help. Then then there is call dispatch; after somebody calls and asks for help, this is about how you alert responders and coordinate their efforts.
Most organizations that Trek Medics works with have methods for handling call intake, typically via a call center. Since 2016, they’ve been able to use Beacon, an open-source, text message-based emergency medical dispatching platform Trek Medics developed specifically for communities where consistent ambulance response isn’t available. To build Beacon, Trek Medics leveraged the Twilio SMS API, Friesen said.
In some cases, however, the emergency organization requires help not only with call intake but also with dispatching. In Malawi, for example, Trek Medics is working with the Ministry of Health to provide better emergency response for traffic accidents using Beacon for dispatching and Twilio Flex for call intake, Friesen said. 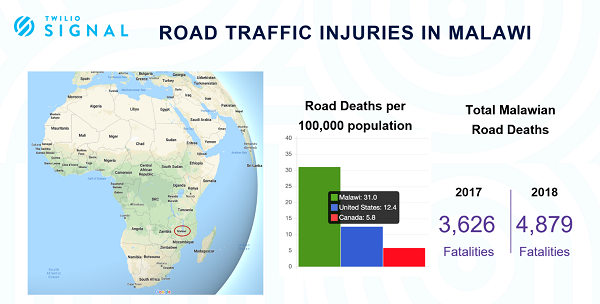 As you can see in the graphic above left, Malawi is in southeastern Africa. At right, you can see the extent of the problem the country has with road traffic injuries. The annual death rate is two and a half times that of the U.S. and more than five times that of Canada. A key contributor to the problem is a 225-mile stretch of highway, the M1, that passes through six districts. Only 10 ambulances with smartphones serve this stretch; 500 community responders with feature phones work to fill in the gaps and provide notification of accidents.
Using Flex, Trek Medics, along with its technology partner Vision Point Systems, designed a call center to answer calls to the “118” number reserved for use by the Malawi Communications Regulatory Authority. Dispatchers, who are young adults with no medical experience, answer the calls with oversight by shift supervisors with medical background. The dispatchers triage calls and apply resources as required using Flex integrated into Beacon. Trek Medic initially aimed to develop a model that could scale for use end to end along the highway, but has since expanded its reach to the entire nation, to help reduce the number of preventable fatalities from traffic accidents annually.
Over the years, Trek Medics has benefited from Twilio’s commitment, as part of the Pledge 1% program, to donate 1% of its equity to further social impact programs. Trek Medics was one of eight nonprofits awarded grants by Twilio in 2017 for using innovative communications strategies to remove the friction for the people who participate in their programs and have demonstrated the potential to scale further through technology.