The big news at Avaya Engage, the company's user/partner/analyst/consultant event taking place this week in New Orleans, is the acquisition of partner Spoken Communications, as mentioned in previous No Jitter coverage. At the same event last year, Avaya had announced a partnership with Spoken to offer CCaaS to business process outsourcers (BPOs), as I wrote about in this February 2017 post.

As I reviewed that earlier post, the seeds of this week's acquisition are there. Spoken CEO Mo Afshar and CMO Jon Gettinger made it clear in our 2017 briefing that the company's platform could be applicable to far more than the CCaaS for BPO market. Spoken was already selling the platform to enterprises and had added call recording, real-time transcription, and other unique capabilities, as shown in green in the graphic below. Clearly the two thought that the Spoken platform could lead to a more extensive relationship with Avaya and its significant embedded base of customers. 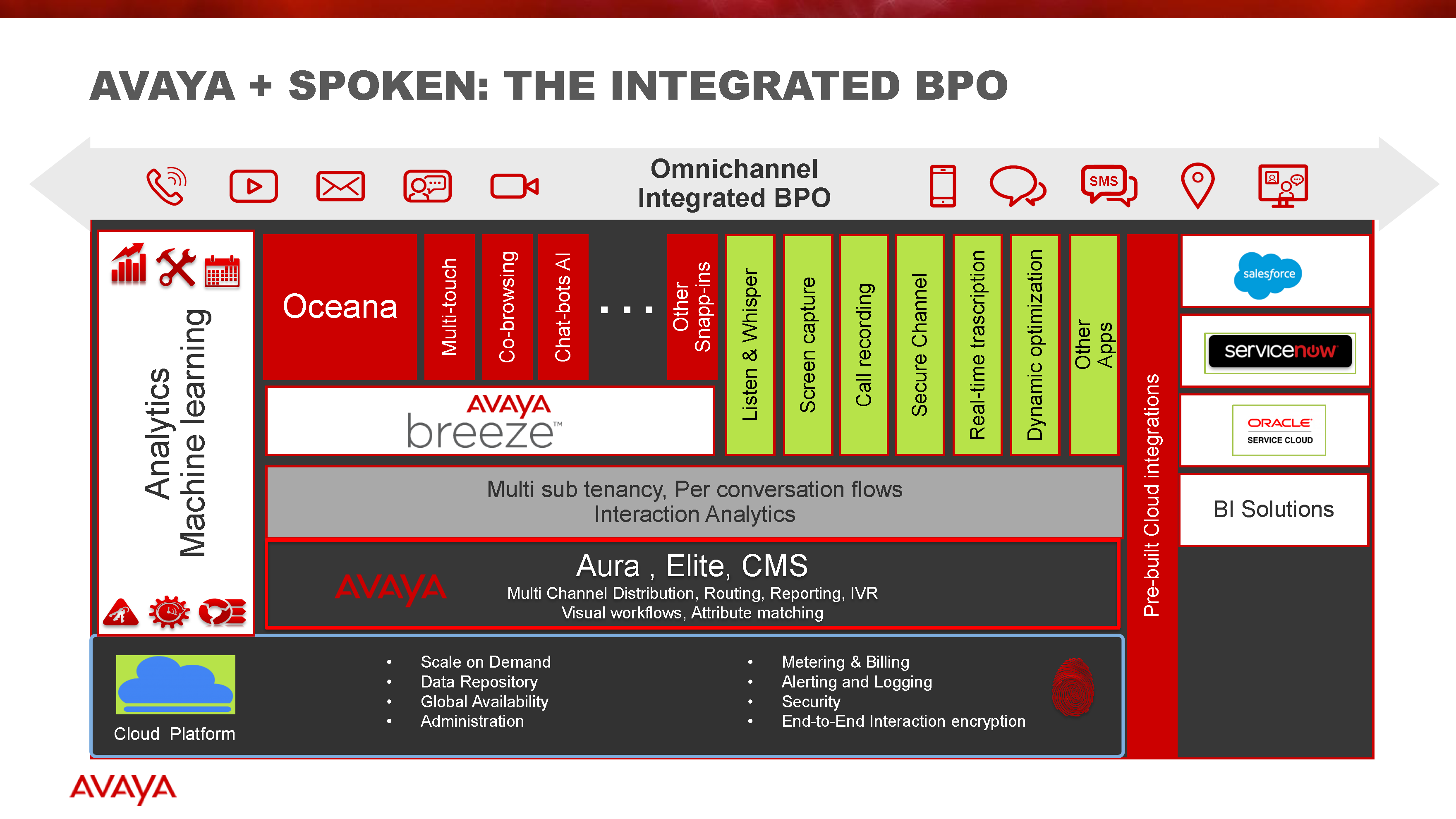 Solid Foundation
In an October 2017 meeting with Spoken, the Avaya executive team reviewed not only what Spoken had built and deployed that related to the existing partnership but also development underway to extend the platform, Nikos Nikolopoulos, Avaya SVP, corporate strategy and development, told me in a briefing at Engage. This week's acquisition is a direct result of that meeting. The executives believed that Spoken's work to create an abstraction layer of Aura functionality (the gray box in the graphic) could be the foundation for an Avaya multi-tenant, scalable platform to support not only BPOs but enterprise contact center and unified communications use cases as well, Nikolopoulos said.

The Avaya-Spoken BPO partnership itself, however, has yet to produce much business, Mercer Rowe, SVP & GM, Avaya Cloud, told me in a one-on-one briefing. While there had been a "few deals," he said, the relationship had not been given the support it needed to truly flourish.

As for progress on adding Oceana components to the Spoken platform, as seen in that graphic from 2017 (above) and discussed as a short-term goal a year ago, Rowe described the effort as underway but not yet complete. Now that the development team will be working as part of Avaya instead of as a partner, along with the fact that Spoken will be part of Rowe's focused Avaya Cloud business unit, we can undoubtedly expect to see acceleration in the plans to incorporate Oceana components.

Oceana in Waves
Another product announced at Engage will be part of that acceleration. Later this year, the Oceana Workspaces desktop client will be available for additional Avaya contact center applications -- meaning Avaya Elite, Aura Contact Center, and Interaction Center. As the Spoken platform is essentially running Avaya Elite, only a minimum amount of additional development will be required to bring Oceana Workspaces to what will be Avaya's CCaaS platform once the Spoken deal closes.

As described to me by Karen Hardy, Avaya's VP for product marketing and solutions, the plan to disaggregate the Oceana desktop and make it available to customers running existing platforms is a way for companies to begin a migration to the full Oceana contact center application. This will allow existing Avaya contact center customers to take advantage of both the refreshed HTML5 desktop and the customer journey features of Oceana Workspaces without a complete application change. Avaya has additional plans to disaggregate Oceana work assignment routing (far more advanced than Elite's vector-driven approach) and reporting (more robust than Elite's CMS) as well.

While I believe the availability of Oceana Workspaces on all of Avaya's contact center platforms sounds the death knell for one-X Agent (well past its sell-by date), I'm loathe to predict the end of the CMS reporting application, which has been around since the early 1990s, with CMS 19 due for release this year. As Laurent Philonenko, Avaya's SVP, solutions and technology, said to me when we met, "CMS will still be around after we are both dead and buried."

The appeal of the Oceana Workspaces desktop to replace one-X client was brought home to me in a conversation on the Avaya Engage Expo hall. An existing customer (a well-known brand I'm not at liberty to disclose) with tens of thousands of named contact center agents discussed how the company has been working with Avaya to develop and bring Oceana Workspaces to Elite. Already working in a limited production environment, the company plans to deploy the desktop application to its entire agent population in 2018.

The Spoken acquisition combined with the disaggregation of Oceana features gives Avaya new ammunition to combat the competitors that have been circling around its embedded contact center base for the past few years. At Enterprise Connect 2018, coming March 12 to 15 in Orlando, Fla., the Contact Center & Customer Experience track I oversee will feature a panel discussion that will include Avaya's Rowe as well as senior executives from Cisco, Five9, Genesys, and NICE inContact. I expect the conversation to be lively.

Learn more about Contact Center & Customer Experience at Enterprise Connect 2018, March 12 to 15, in Orlando, Fla. Register now using the code NOJITTER to save an additional $200 off the Early Bird Pricing or get a free Expo Plus pass.