Beth Schultz
It’s been just about a year to date since UCaaS provider Dialpad picked up voice analytics startup TalkIQ and introduced its VoiceAI offering, and the company continues to parlay the voice analytics smarts gained in the acquisition for different user personas.
Dialpad Sell, introduced today, is an advanced outbound calling service for sales organizations. It uses voice analytics technology to augment conversations with real-time transcription and coaching, as well as to derive understanding from them after the fact through search, sharing, and reporting, said Dan O’Connell, chief strategy officer at Dialpad and former CEO at TalkIQ.
Sell follows the late 2018 introduction of Dialpad Support, which applies real-time intelligence to conversations between contact center agents and customers.
Sell is built for enterprise scale, with the ability to apply the homegrown TalkIQ speech recognition and natural language processing technologies to hundreds of concurrent calls, O’Connell noted. For additional enterprise appeal, Dialpad customizes its models as part of the onboarding process for every customer, he added.
“Every business has its unique jargon or acronyms, or company or product names that don’t show up in the Merriam-Webster dictionary,” O’Connell said. Dialpad essentially builds language and acoustic models for the speech recognition to understand and transcribe nuanced conversations rather than taking the more common tactic of running a single language model, he added.
Because Dialpad customizes its language models, Sell can react to triggers such as specific product or competitor names, O’Connell said.
As mentioned above, the Sell product is dual purpose, both augmenting live calls and providing understanding based on post-conversation analysis.
For example, a real-time coaching capability, called LiveCoach, can deliver text prompts to a sales rep on how to handle an objection raised during a conversation or respond to a statement or question about a competitive offer, O’Connell said. Sentiment analysis also comes into play, which can be particularly useful for sales managers monitoring and providing guidance during live calls (see graphic below). Overall, the real-time augmentation can help boost a sales rep’s confidence while shortening the sales cycle and upping the number of deals closed, Dialpad said. 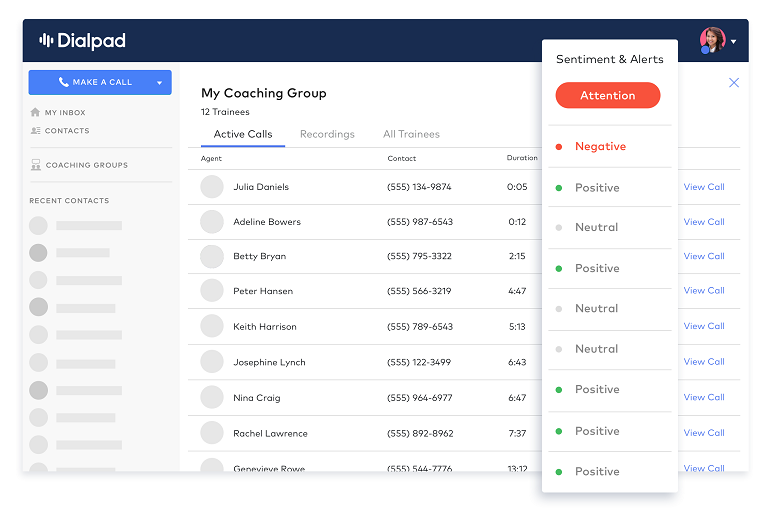 For a call retrospective, a feature called GameTape provides immediate post-call access to transcripts. This allows the sales team to assess conversations and make follow-on decisions in near real time, for improved sales effectiveness and revenue opportunities, O’Connell said. Whether through keyword searches or analytics, sales teams can easily discover action items, coaching moments, and insights on an individual’s performance; get metrics on team performance; and unearth trends among calls.
In addition, Sell supports mobile calling and logging within Salesforce, Microsoft Dynamics, and other CRMs, O’Connell said. It also offers call routing, power dialer, local presence, geographic routing, and voice analytics on conference calls.
Sell comes in a Pro version for $95 monthly/user and an Enterprise edition for $120 monthly/user. Each Sell package comes with free Pro licenses for Dialpad’s UberConference service.
Separately, Dialpad last week announced that it has extended its global presence, opening a London office and expanding its channel operations in Europe.

A Better Way to Do AI: Focus on the Big Problems

At NEC Visionary Week, physicist Michio Kaku shared how AI can help in the COVID-19 fight. But should enterprises be just as bold in their AI use?

Nvidia turns its eyes to the collaboration industry with an AI service that intelligently uses bandwidth and enhances the meeting experience.

7 Speech Tech Vendors Pushing Ahead in the Enterprise

Speech technologies are likely to become more prevalent in the enterprise, especially when allowing for touchless collaboration.