New cloud call center platform provides the ability to draw intelligence out of conversations in progress.

As promised with the May acquisition of voice analytics startup TalkIQ, Dialpad has beefed up its call center portfolio with an artificial intelligence (AI)-powered cloud platform.

Dan O’Connell, who had been CEO of the former company and is now chief strategy officer at the latter, considers Dialpad’s use of an internally developed AI engine as a competitive advantage, enabling the company to deliver real-time intelligence with accuracy on par with Google’s -- the “gold standard,” he told me in a recent briefing. While Dialpad doesn’t have thousands of engineers at its disposal as does Google, it has the advantage of telephony expertise, he added.

“Google is likely going to do really, really well on words in the English dictionary,” and over time will win on the widely used word-error-rate (WER) metric due to sheer volume of the data it processes, O’Connell continued. But where Dialpad has the opportunity to shine, he said, is on keyword error rate (KER), which accounts for business-specific language. That’s because when a company signs up as a customer, Dialpad will train its AI models using words specific to that company -- product designations, competitors’ names, acronyms, and so on, he explained.

“We deploy specific models to every company … because you have to be able to weight certain words for specific businesses,” said O’Connell, using “UberConference,” the Dialpad meeting service as an example. Doing so enables the analytics engine to know the difference between “that was the most epic uber conference ever!” and “that was the most epic UberConference ever!” -- or, the difference between “ICU” and “eye see you.” 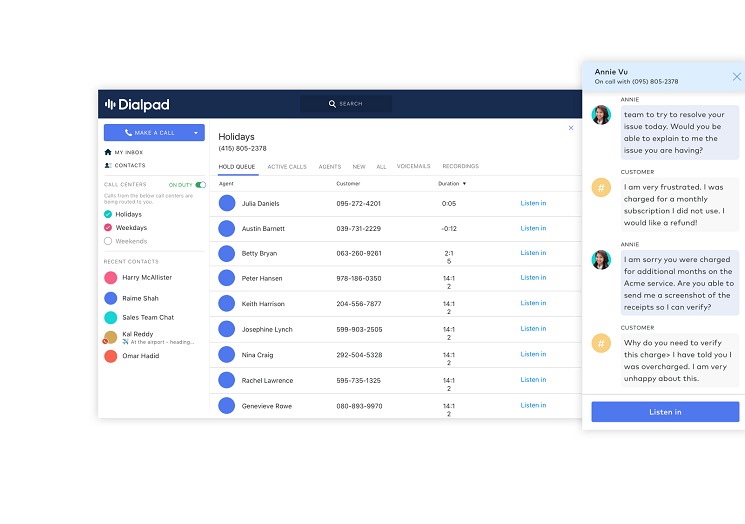 With Dialpad Support, call centers get access to a host of real-time intelligence, including:

In addition, Dialpad Support allows supervisors to listen in and monitor active calls, provide live coaching tips and advice to agents via messaging, and jump in to handle troublesome issues as they escalate.

Acquia, an experience management company, has seen a “major difference” in the productivity and efficiency of its global support organization, reported Olaf Doemer, director of global support at Acquia, in a prepared statement. In addition, he credited the reporting and analytics features as being “fundamental to understanding call volumes and opportunities for customer experience improvement.” (For more on Acquia’s migration to the cloud, tune in to the No Jitter On Air podcast episode, “Cloud PBX: No Need for Trepidation.”

In addition to differentiating on real-time intelligence and transcription accuracy, Dialpad also offers a cost advantage, O’Connell said. In terms of the new Support product, that translates to a starting price of $75 per user per month, for the Pro plan. The monthly per-user rate jumps to $100 for the Enterprise plan.

Support, which is built on the Google Cloud Platform, is available now.

The answer lies in having a dedicated, secure network designed for real-time applications.

Discover key findings on how IBM Watson Assistant has netted organizations a variety of quantifiable benefits.

Better for You, Better for Customers: The AI/ML-Powered Contact Center

New ways you can use advanced technology to deliver superior responsiveness.