A room occupancy counter, dynamic adjustment of video stream, and light optimization among AI features in the offerings. 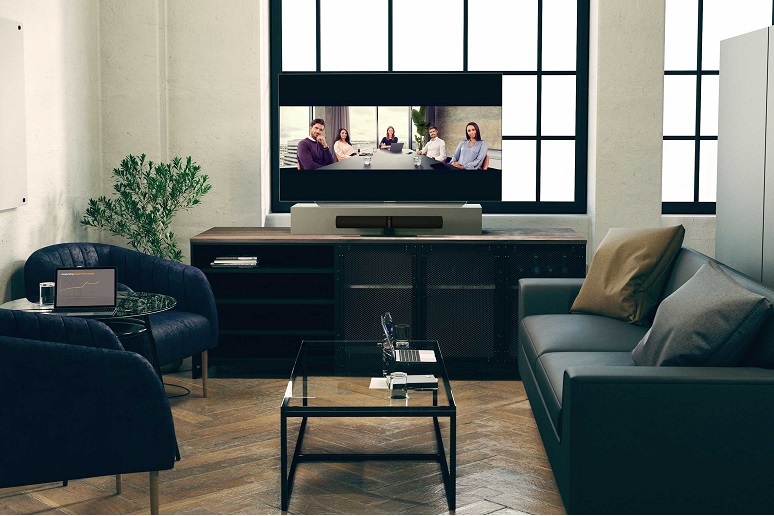 Source: Jabra press release
Just as AI-based features have made their way into cloud video services, videoconferencing devices have had their own AI-based revolution of sorts, with more AI capabilities coming fresh out of the box. Jabra continued that trend yesterday, revealing a video bar and webcam with native AI-based capabilities.
Designed with hybrid work in mind, the PanaCast 50 is a plug-and-play device with AI features enabled by nine AI edge processors, including a dedicated processor for video and another for audio, Aurangzeb Khan, SVP at Jabra, told No Jitter in a briefing. Among the AI capabilities now available is a room occupancy counter, which sounds an alert when capacity is exceeded; Virtual Director, which intelligently detects active in-room speakers and dynamically adjusts a video stream for optimal viewing; and microphone-level background noise removal.
To further enhance the viewing experience, PanaCast 50 features a multi-camera array that supports a 180-degree field of view, which should prevent the optical distortion typical of a 90-degree camera where people appear squished in the middle, Khan explained. This multi-camera array enables Jabra’s PanaCast whiteboard-sharing feature, which can detect an in-room whiteboard and replicate it on screen for remote employees to see.
On the audio side, the PanaCast 50 includes four built-in Jabra speakers and eight beamforming microphones, as well as the background noise removal, Khan said.
Also designed with hybrid work in mind, the PanaCast 20 webcam sports several AI features, including lighting optimization and intelligent zoom. With the PanaCast 20, a picture-in-picture feature lets a user merge two video streams into a single view, Khan said. For instance, a user's video stream will appear in the corner of the screen, while a second video stream can showcase a product or a demo in a larger main window, he explained.
The PanaCast 50 and PanaCast 20 work with all popular collaboration systems, and Jabra worked with Microsoft, Zoom, and Google to ensure its devices are service agnostic, Khan said. The PanaCast 50 will be available in June, in black or gray, for $1,195, and the PanaCast 20 will be available in August for $299, Jabra stated in a press release.

Zoom, Miro Encourage Tasks Within Collaboration Platforms
Lisa Schmeiser
May 20, 2022
Are On-Prem Phone Systems Actually Dead?
Melissa Swartz
May 18, 2022
A Partner Perspective on Transitioning from Mitel to RingCentral
May 11, 2022
What to Expect at NICE’s Interactions Live 2022 Event
Dave Michels
May 19, 2022
From User Adoption to Hybrid Work Success
Eric Krapf
May 20, 2022