Horizons, Holograms, and Headsets: What’s Next in VR/AR

The biggest month of the year for virtual and augmented reality ended with a bang. 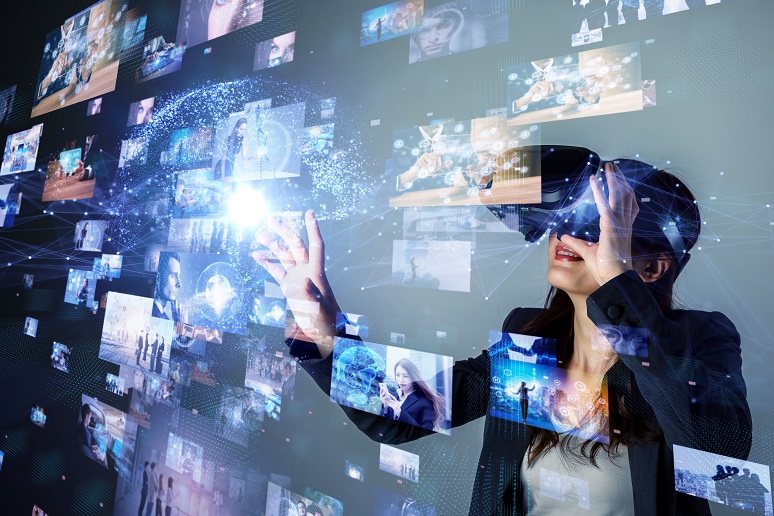 Image: metamorworks - stock.adobe.com
October was a crazy month for the virtual reality (VR) and augmented reality (AR) space. For the entire month, it seemed like there were major announcements every few days. It was hard to keep up, but after the dust settled, three developments, from Facebook, Cisco, and others (outlined below), were worthy of discussion that all look to the future of how we will work, collaborate, play, and live in the metaverse.
1. Horizons
Perhaps the most anticipated event of the year for the VR and AR community was Facebook Connect 2021. Before I get into what Facebook announced, it’s interesting to note what it didn’t. For example, Facebook didn’t roll out a new Oculus VR headset, nor did it reveal the general availability of its social VR platform, Horizon (now Horizon Worlds), which remains only in the U.S. in relatively closed beta.
Instead, Mark Zuckerberg spent most of the keynote laying out his vision for the impending metaverse. I can’t recall more effort spent on a keynote that didn’t include much in the way of available products or services. A lot of chatter has surrounded the metaverse lately, and most people still don’t have a solid understanding of what it truly is. That’s why I thought Zuckerberg needed to share his vision of the metaverse, as he is making huge bets that the world will buy in at some point, just as they did with Facebook, Instagram, and WhatsApp.
From a business perspective, Horizon Workrooms continues to show promise as an option for the “work” portion of the metaverse—as opposed to the announced Horizon Home—and aforementioned Horizon Worlds, which will be where folks will gather for social interactions and entertainment. Since its initial release, I've been using Horizon Workrooms, a workplace collaboration tool, and even in beta, I'm impressed by its comprehensiveness. I find meetings there to be more engaging, more memorable, and I love their virtual whiteboard implementation.
At the very end of the keynote, Zuckerberg announced the new branding around Meta. He noted that Meta means “beyond” and I’m sure he wishes to move beyond the place he finds himself in now. But a new brand for these new ventures makes a lot of sense, as Facebook seeks to pivot away from privacy concerns, regulatory scrutiny, Instagram issues, and more.
2. Holograms
At the tail-end of the keynote at Webex One 2021, Cisco announced Webex Hologram and gave attendees a quick glimpse into the solution. While Cisco has been dabbling in AR with partners such as Realwear, Webex Hologram marks a leap forward into this space in a spectacular way. Webex Hologram is what it sounds like – a collaboration solution that uses 3D holograms instead of 2D video images.
I had the opportunity to demo Webex Hologram last month. Using a HoloLens 2 mixed reality headset, I joined a one-to-one meeting where a real-time 3D hologram of the participant appeared at the end of my desk in my home office. It was remarkable and one of those moments where you immediately recognize the transition from science fiction to science fact. At the end of the session, the holographic participant grabbed a frisbee and threw it at me. Even though I knew it was coming, I couldn’t help but duck when he let it go. That’s how realistic the experience was.
Webex Hologram is still in the early stages of private beta, therefore it's too early to talk about specifics like hardware, camera systems, or pricing. Because the technology is so new, even use cases are difficult to predict at this time. While I’m impressed with the solution, I’m even more impressed with the vision and commitment went into making this futuristic idea reality. The pandemic has changed the world forever, and we’ll need these types of innovations to move us beyond the limitations of collaboration tools available today.
3. Headsets
While the (rumored) Oculus Quest 3 and Oculus Quest Pro VR headsets weren’t on display at Facebook Connect (as many had hoped for), there has been a flurry of announcements in recent weeks around VR headsets. We saw two more announcements in the quest (pun intended) for better quality headsets in smaller form factors, which should help the industry move closer to that goal.
HTC VIVE, a VR hardware provider, announced the VIVE Flow, a device it calls “Immersive VR glasses for on-the-go wellness.” While I’m not sure of the demand for VR glasses for on-the-go wellness, a huge demand exists for VR glasses, which, while more headsets than glasses, still represent a badly needed shrinking form factor for VR. The large form factor of current VR headsets is still a big objection for many potential users, and I’m encouraged to see HTC working to address this concern.
Finally, VR headset maker Pimax announced a 12k headset to be released next year. The headset has some truly innovative features and promises to be one of the most technologically advanced and highest-quality headsets available to consumers—and with a $2400 price tag, it should be. While priced outside the mainstream VR user range, the increased field of view and screen resolution begin to approach life-like experiences, which should trickle down to more mainstream devices in the next few years.
I likely won’t buy either of these devices but eagerly await the generation of devices that combine the power of Pimax 12k with the form factor of the VIVE Flow.
While still in the early stages of envisioning the metaverse, the journey is underway and accelerating quickly. The metaverse will be made of these technologies and more to support personal and business interactions. The metaverse —just as the internet did 25 years ago—will profoundly impact business communications. If not more so.