CEO Don Joos says the company will differentiate by being an enabler, not just a provider. 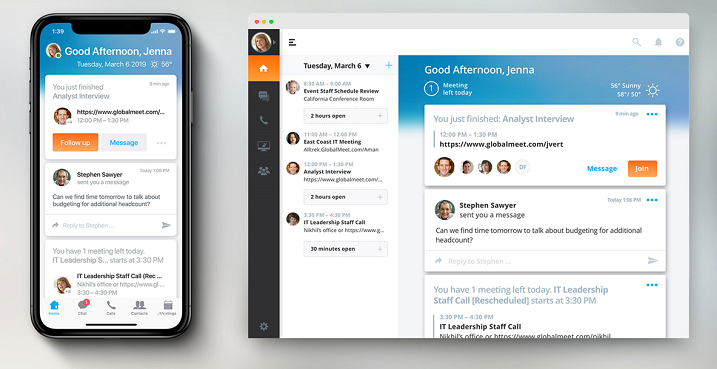 You didn’t necessarily need to have sat in on the opening morning Enterprise Connect session, “Big Brands & Convergence: Understanding the UCaaS Market Landscape,” to know that cloud UC providers abound. A stroll among the more than 200 exhibitors on the Expo floor will bring that fact, once again, into stark reality.
UC is often best served today from the cloud. But from a migration perspective, especially for many larger enterprises, this move from the premises to the cloud for UC is only just beginning -- if that. That’s a business reality that continues to entice service providers themselves to make the leap into the cloud.
The latest evidence of such comes from PGi, a privately held business communications provider that today announced its UCaaS intentions. UCaaS is a “natural adjacency” for the company, which already serves some 46,000 businesses globally with its GlobalMeet brand of Web conferencing and collaboration services, said CEO Don Joos, in a recent No Jitter briefing. GlobalMeet UCaaS capabilities -- voice and business messaging -- are in beta in the U.S. today, with general availability planned for next quarter. International expansion will follow later this year, he said.
What you’re seeing with the UCaaS portfolio addition is PGi 3.0, said Joos, who as ShoreTel CEO from 2013 to 2017, prior to the Mitel acquisition, had transitioned the company from a premises- to cloud-based operating model. Its heritage as a carrier-grade audio conferencing provider will serve it well in UCaaS, he added.
UCaaS isn’t about a features battle, he said. You need to have the right features, of course. But then there are what he calls the “ilities” – stability, reliability, maintainability, and so on. “There’s the platform and then there’s the provisioning, onboarding, and other processes. … UCaaS isn’t about being a provider, but an enabler.”
In addition to the UCaaS offering, PGi introduced GlobalMeet Collaboration enhancements fueled by data and artificial intelligence (AI). For example, an integration with Active Directory delivers calendar awareness to Office 365 users, while recording reminders capture content during meetings and help organizers keep track of next steps after a meeting ends, and live transcripts and meeting summaries allow viewers to scan meeting content quickly.
PGi also now offers a GlobalMeet widget, aimed at addressing “the epidemic of multi-tasking during meetings.” This widget allows users to access features and functionality even if the GlobalMeet screen is minimized.
Visit PGi on the Enterprise Connect Expo floor at booth 1311.