Text-to-Toll Free: Coming to a Contact Center Near You

With texting so prevalent among consumers, customer-facing organizations best think about text-enabling their inbound numbers.

At the rate modern society is progressing, the ability to text will soon be as innate a human behavior as smiling when happy.

Any parent with smartphone-wielding children knows this all too well. Why talk to your mom, even if she's sitting in the next room, when you can text her instead? Why return your dad's phone call when you can drop him a quick "'Sup?" text instead?

Familial joking aside, the texting preference requires immediate attention by any contact center or other customer-facing operation that hasn't yet text-enabled inbound numbers. Research shows that customers are going to send support- and service-related text messages to those numbers, so companies must act -- or be prepared to be held accountable for their unresponsiveness.

Texting Into Oblivion
You may have heard some of the stats from Harris Interactive's 2014 nationwide customer service poll, conducted on the behalf of omnichannel contact center provider OneReach. In that survey of 2,000 adult consumers, 64% of respondents with texting capabilities said they'd prefer to text with rather than talk to customer service agents. A good chunk of those folks -- 44% -- indicated they'd rather push a button and start a text conversation on the spot than wait on hold to talk to an agent.

OpenMarket, a division of Amdocs that supports multichannel enterprise mobile engagement, dug deeper on this sort of consumer behavior by analyzing traffic patterns on a sampling of Fortune 100 toll-free (1-800) numbers. OpenMarket conducted this research in conjunction with Zipwhip, a cloud texting platform.

OpenMarket and Zipwhip each connect text messages into carrier networks, giving them the ability to watch calling patterns. "We can see when callers attempt to send text messages to numbers that aren't enabled to handle them. These messages are essentially going nowhere," said Tim Fujita-Yuhas, director of product management at OpenMarket, in a recent interview.

Fujita-Yuhas highlighted what he felt were the researchers' most salient findings. First, consumers attempted to send more than 400,000 text messages to F100 toll-free numbers during a one-year period. Second, more than 50% of these attempted texts were intended for financial services companies -- "that's the bull's-eye," he said. "Consumers very much want to be texting to and receiving text messages from the companies from which they have their financial services."

Supporting that claim, Fujita-Yuhas shared: The top 10 companies, five of those being in financial services, were at the receiving end of 85% of the attempted messages.

Researchers supplemented these findings with customer interviews. In those surveys, they found that nine out of 10 consumers prefer texting to calling, Fujita-Yuhas said. Overall, he added, OpenMarket and Zipwhip feel their numbers are conservative.

He then shared a few use case examples. One contact center, for example, changed its opening IVR prompt to a greeting saying, "Feel free to hang up and text this number instead if you want faster service." Turns out that 40% of its callers are doing just that, he said. 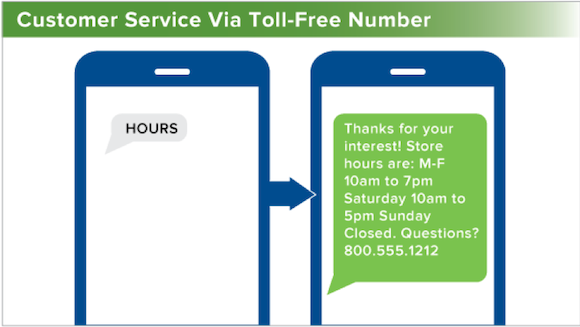 "This is a hard ROI on call deflection," Fujita-Yuhas said. "An agent can serve only one voice call at a time, but the ratio is 6 to 8 chat sessions simultaneously, based on real-world customer experience."

In another use case, retailers or other companies could use text-enabled toll-free numbers for two-factor authentication from their websites. Should a hacker obtain user account information, he or she also would need the user's mobile phone in order to authenticate -- i.e., verify identity -- by texting to the provided toll-free number, he said. Some companies might try short codes for this purpose, but that can be limiting for a number of reasons. For example, not all mobile virtual network operators can accept short codes.

Service Disassociation
Short codes can take four to six weeks to provision, Fujita-Yuhas also noted. Text-enabling a toll-free number, on the other hand, is doable in a few days if not hours.

OpenMarket sees text-enabled toll-free numbers and landlines as the next evolutionary step or alternative option to short codes, he said. "What we tell our customers is that there are pros and cons to each of these. 'Tell us your use case, and we'll give you our opinion on which is best.'"

While Fujita-Yuhas acknowledged that OpenMarket has its work cut out for it in educating companies about the value of text-enabling their toll-free numbers, he said he's convinced this is the wave of the future. "The medium or the channel of texting is starting to be more associated with phone numbers, and I think we're moving into a world where, if you have a phone number, you'll have it associated with different voice and data services," he said. "Phone numbers are going to be disassociated from the service."