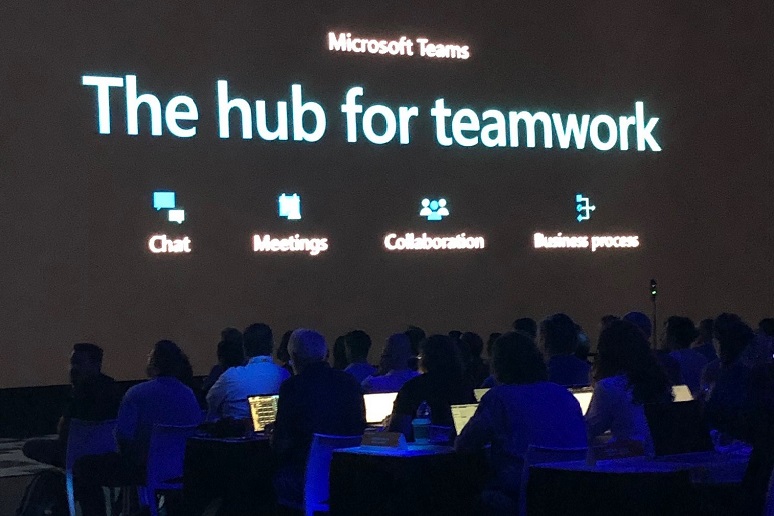 Microsoft kicked off its annual Ignite conference this morning, taking the wraps off a slew of updates aimed at improving the experience with Teams and other pieces of the Microsoft 365 cloud-based productivity platform.
The M365 enhancements show investment across six key areas, with artificial intelligence (AI) woven throughout, as noted in a blog post and technical keynote from Jared Spataro, CVP for M365 at Microsoft. Those areas are productivity, knowledge, workflow, security, compliance, and management, he said.
With the M365 portfolio updates comprising some 60-odd pages in the Book of News Microsoft released for Ignite, I’ll just be scratching the surface on what the company said it’s doing to improve on its productivity cloud deliverables. The focus here is on Teams, the teamwork hub that today forms the basis of all future Microsoft’s communications and collaboration initiatives. As Sparato told a packed auditorium of attendees that came to hear about the latest on Teams in more detail, Teams is to Microsoft today what Windows was in the past.
Productivity
With an overarching goal of improving how people “create, collaborate, analyze, write, present, organize, and manage their work,” Microsoft has added a variety of new productivity-related features and capabilities to Teams. The updates include:
During the Ignite vision and technical keynotes, Microsoft also showed off the capabilities of Fluid Framework, a technology announced back in May at the company’s Build conference for developers. As demonstrated on stage here, Fluid makes collaboration more seamless by breaking down the barriers between apps so that, for example, when a team member updates a proposal in Outlook, a colleague working in the project’s Teams space will see the changes in real-time.
Fluid’s purpose is threefold, Sparato described: 1) to support multiperson coauthoring on web and document content, 2) to provide a componentized document model that allows content to be deconstructed into reusable collaborative building blocks, and 3) to enable intelligent agents to work alongside humans to translate text, grab content, suggest edits, and such.
The Fluid user experience is now available in a public preview, with developers having access to a private preview. “Over time,” Sparato said, “We expect these capabilities to light up in experiences across Microsoft 365, including within chat in Teams, mail in Outlook, portals in SharePoint, notes in OneNote, and documents in Office.”

Knowledge
Knowledge represents a new investment area for M365, Spataro noted in his blog—the “next step forward,” as Microsoft CEO Satya Nadella pronounced during his vision keynote. Toward that end, a brand-new entry for the M365 portfolio is Project Cortex, the first commercial service introduced since the Teams launch in March 2017, Spataro noted. This new service uses AI “to reason over your organization’s data and automatically organize it into shared topics like projects and customers,” thus creating a knowledge network, he wrote.
Project Cortex, in essence, turns all content across M365, including Teams, into an interactive knowledge repository, Spataro said. It enables “smart content ingestion,” for document analysis and content modeling; machine teaching, so that subject matter experts can bring an understanding of semi-structured content to the system; and knowledge retrieval, to ease access to information that otherwise might stay locked away in documents, conversations, meetings, and videos, he wrote. In addition, Project Cortex includes built-in security, compliance, and workflow capabilities.
Under the knowledge umbrella, Microsoft also has introduced updates for:
Workflow
Business process improvements announced at Ignite include integration of Microsoft’s Power Platform with Teams so that users can more easily automate tasks, create custom apps, and engage with data, Spataro said. In addition, the integration “unlocks a conversational approach to streamlining productivity scenarios—from managing approvals directly in chat to pinning a custom app where a team needs it,” he explained.
Toward these ends, Microsoft announced that Power Apps creators are now able to publish their work as Teams apps, available for users to pin to their left rail in Teams. And, it has added new Power Automate triggers and actions for use in streamlining common team and personal tasks. Coming soon, Sparato added, will be Power BI previews in Teams chat and an enhanced Power BI tab that will let users see all their data in Teams.
Security & Compliance
Applying AI to security and compliance has netted new security capabilities such as the ability for any customer with an Azure AD plan, paid or not, to use the Microsoft Authenticator app for access to Teams and other Microsoft apps, as well as third-party apps sans password. Moving away from passwords and instead relying on two-factor or multifactor authentication is today’s best practice for enterprise app access.
For compliance, Microsoft sees AI as a “force multiplier to keep you one step ahead of the increasingly complex compliance requirements and ever-evolving insider threats,” Sparato wrote. On that latter point, Microsoft today introduced Insider Risk Management in M365, designed to help with the quick identification and remediation of insider threats, risks, and policy violations across Microsoft and third-party apps.
Management
Amid a variety of device-management enhancements, Microsoft has opened a private preview of Managed Meeting Rooms from Microsoft, Sparato said. This new cloud-based IT management and security monitoring service is aimed at providing assurance that Teams meeting rooms are secured, up to date, and proactively monitored for optimal experience. This private preview follows work Microsoft has been doing with more than 100 customers managing over 1,500 meeting rooms, Sparato reported.
Managed Meeting Rooms is one of a few announcements Microsoft made around Teams. Another is the interoperability partnership announced today with Cisco (read related article here).
Watch for additional coverage coming out of Ignite on Teams, meetings, and more!