With many users experiencing frustrations meeting in one-on-one settings, is it time for enterprises to reinvent their visual collaboration tools, like digital whiteboards? 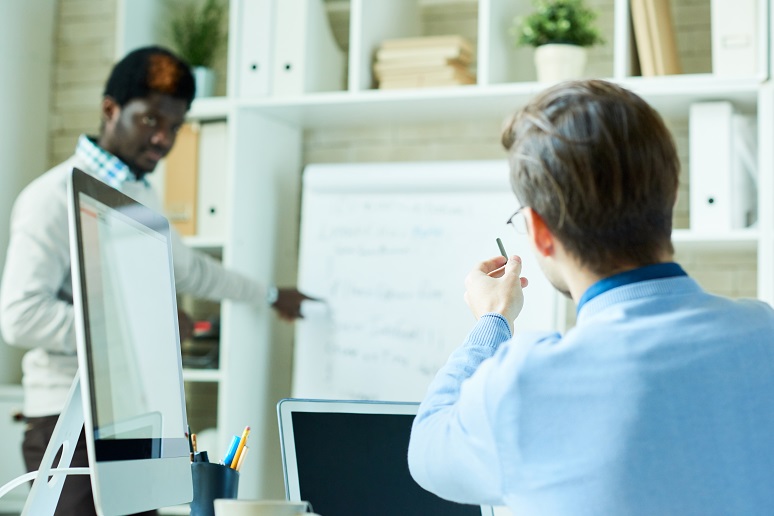 Image: Seventyfour - stock.adobe.com
Enterprises faced with lockdowns quickly adapted their meeting strategy with services like Teams or Zoom, and now that some have started bringing workers back, they’ve found that it’s really not too difficult to shift between in-person and video meetings. Many were surprised when some workers expressed a new preference for in-office work, and companies looked into why that was; they discovered the problem of the pair.
Workers say that two-party meetings, the call-into-my-office or pop-into-the-cubicle meetings, are by far the most common kinds of meetings, and my own 2018-2019 study found that pairwise collaboration made up over three-quarters of all collaborations. It’s these most-common meetings that workers say work better face-to-face (F2F), and the reason behind their preference is a combination of scheduling hassles and the whiteboard feature.
Some of my friends in the Teams and Zoom development area seem to realize that promoting pairwise collaboration may be critical to their business just because it is so pervasive and might be facing extension. They’re working on strategies to make it possible to set up extemporaneous two-party meetings very quickly, as quickly as a video chat but with all the usual team-meeting features, including screen sharing and whiteboard. While doing focus groups on the whiteboard topic, many of these video collaboration product planners were surprised to find how unhappy two-party collaborators were with whiteboard tools.
It turns out that the whiteboard issue is a lot harder to fix. Workers say that two-party meetings often start with a let-me-show-you request, issued in frustration when it becomes impossible to convey an important point without drawing a picture. Organized multi-party meetings get prepared slides. Collaborating pairs draw extemporaneously. Yes, drawing and desktop-sharing tools are available in all the popular web meeting tools, and they’re improving. But everyone who’s ever done a lot of two-party F2F meetings knows that it’s hard to beat a whiteboard or flip chart easel for brainstorming. To quote one product management type, “I’d rather draw on a napkin than use a web whiteboard.”
Napkins might be OK if we could teleport them between parties, but a more practical strategy would be helpful for most. A company that is about as far from being a household word in collaboration as you could get is hinting at what such a strategy could be — that company being Nvidia.
Nvidia has a toolkit called Omniverse, designed to support collaboration among those building video/visual content. Think giant features based entirely on digital artwork and simulation. Omniverse is built around Nvidia’s GPUs, and because it’s designed for collaboration on intense video projects, it’s able to support real-time interaction and drawing at a level beyond anything simple whiteboard applications could support.
Think of Omniverse as a platform for visual experiences and their creation. Developers can build to it, and the Omniverse tools ensure that all the software that’s built can interact and share assets, so it’s a visual experience in a box...a virtual box, of course. The nice thing about Omniverse is that it encourages visual-and-media-centric collaboration without regard to whether the parties are sitting at the same desk or across the world. By doing that, it erases the distinction between WFH and office work and makes hybrid work practices automatic.
The centerpiece of Omniverse is Pixar’s open-source concept of a Universal Scene Description (USD), which is both an architecture for representing visual elements and a file format used to exchange information between applications. USD has an API set to support visual exchanges in real-time. These exchanges can represent either specific steps in creating a visual product as an outcome, or as collaborative interactions associated with creating something, even something that might not be a visual product like a movie or commercial.
Before you run out and pick up your copy (right now, Omniverse is in developer beta), you should know that a tool for carpentry isn’t the same as a house. Omniverse tools have to be built into specific applications, and it’s those applications that could finally solve the let-me-draw-that challenge. Then, you have to socialize people to using super-whiteboard tools that these new applications build. Only then can you replace the traditional napkin as a means of communicating.
The biggest value of Omniverse might not be those applications, though. Most businesses aren’t creating digital video or other visual assets, and even fewer project collaborations need all those wonderful graphics that Omniverse could create. A simple whiteboard isn’t much of a challenge for a USD scene that could be an artificial reality framework. It’s the concept that could be important for pair-wise collaboration if other collaboration vendors pick it up.
If we want to make collaboration work for everything from pairwise chats to big meetings, we should be looking at what a “collaboration” is and modeling it entirely. We should be creating our platform as a toolkit, and collaborative applications should then exploit that toolkit. What we’ve done instead is applied video technology to the simple task of looking at collaborative partners, and then glued on accommodations to do things like draw. Drawing and sharing are, in fact, more important than viewing, particularly in two-party relationships where decades of research show that there’s really no benefit in seeing the other party at all. It’s drawing, not face time, that should be the center of online meetings for two.
We’ve got a way to go here, but Omniverse shows that much more complicated things can be done collaboratively. Microsoft may be trying this with Office 365 and Teams already, and once collaborative software tools get that message, napkins all over the world may get very lonely.