Skype for Business Gets Real

Microsoft releases technical preview of Skype for Business client, which features familiar Lync functionality with a Skype look and feel.

Orlando may not always be the center of the enterprise communications universe but, as Adam Swidler, Google technology evangelist for Google at Work, said during yesterday morning's Enterprise Connect 2015 keynote, it has been this week.

Zig Serafin, corporate vice president of Skype for Business, certainly did his best to make his Wednesday morning keynote audience feel like that's the case. Using the capabilities of Microsoft's Surface Hub team collaboration tool, which includes Skype for Business integration, Serafin showed the audience just how easy it is to share and collaborate on content.

In a flash, he pulled up an aerial view of Orlando, zoomed into the Gaylord, home to Enterprise Connect 2015, rotated the image -- showing it in a front-on 3-D view even -- then marked up the image, pulled it into a OneNote-based digital whiteboard and inked it up to ask team members to zero in on a specific location. And then he ended the session, sending off his "meeting" notes, including the image and everything else he'd scribbled on the whiteboard, to live in OneNote for later recall. 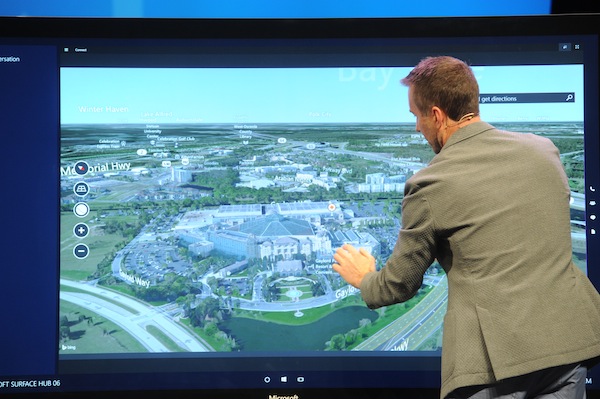 The Surface Hub, a new large-screen device built for digital ink and touch, is optimized for group collaboration, enabling multiple people to share and edit content to the screen from any device and location. The Surface Hub is an all-in-one video conference system, complete with auto-sensing presence technology and network connectivity.

Cool stuff, to be sure, but this was not the real meat of Serafin's messaging. That would be the news that Skype for Business is now here, as is clearly evident from branding Enterprise Connect attendees could see any which way they turned. Skype for Business brings together the best of Lync with the best of Skype in a newly evolved client, Serafin said. That Skype for Business client, Skype Business Service, is downloadable now for technical preview. Microsoft said it plans on making the client and service in Office 365 available for general availability in April.

Lync worrywarts can rest easy. Skype for Business includes the full Lync feature set, plus some enhancements, he said. But Lync now features a more adaptive, responsive, and familiar Skype experience; is part of the Office 365 cloud architecture; and has enterprise-grade high availability and disaster recovery for secure, compliant communications. And, of course, Microsoft has tapped into its Skype expertise to amp up the video calling experience from within Lync, Serafin said. The goal is to ease the ability for users to quickly and easily launch audio and video calls without losing any functionality of Lync.

The moves that Microsoft is making with Skype for Business boil down to the company's goal of creating a "comprehensive productivity experience." Toward that end, Serafin announced that the company is offering enterprise voice services, including audio conferencing in Office 365, and enterprise-grade PSTN connectivity. The voice and conferencing capabilities will be available in the U.S. later this year and then globally, supported from Microsoft data centers around the world. Microsoft strategic carrier partners, including AT&T, BT, Orange Business Services, Tata Communications and others, will provide direct connections to Office 365 Skype for Business customers through Azure ExpressRoute for Office 365, Serafin said.

In addition, Serafin announced that a slew of partners will offer Skype for Business support for their video room systems. In particular, he called out an expanded relationship with Polycom, asking Polycom CEO Peter Leav to join him on stage to introduce the company's purpose-built video solutions for Skype for Business. The first offering is the Polycom RoundTable 100, a $1,000 device available from the Microsoft storefront and aimed at small and medium-sized businesses.

In the keynote that followed Serafin's, Google's Swidler also spoke to the need for a new sort of productivity, actually calling up a term originated by Steven Sinofsky, former president of Microsoft's Windows Division. Sinofsky wrote of the need for "continuous productivity," a concept Swidler said he feels is particularly pertinent in the context of mobility.

In a continuous productivity environment, management's job is to frame the context and provide high-level guidance for teams. Armed with this information, the real decisions are made at the team level, Swidler said. And if teams don't have the tools they need to facilitate their discussions and decision-making, then watch out IT, 'cause they're going to get them themselves.

Of course, that's no news in these days of BYO everything -- devices, apps, software -- and grabbing whatever you need from the cloud. But figuring out how to finesse all of that -- well, that's what we're hoping to help everybody do at Enterprise Connect and No Jitter.