Let's take a detailed look at the company's latest foray into the UC market.

So many UC vendors have made plays in the hosted UC services game that I sometimes wonder if the trend is newsy any more. Mitel has long offered hosted services based on its own technology. ShoreTel offers them based on acquired technology, and is in the process of transitioning over to its own. Avaya delivers a diverse set of services in different delivery models. And Cisco seems to be testing the hosted UC services market with its hosted video conferencing service. NEC, Toshiba, Polycom... the list goes on, and on.

And now comes Interactive Intelligence, whose entry into the hosted UC services market has been a year in the making. The company is taking a rather Jobsian "Think Different" approach to PureCloud Communicate, which is scheduled for general availability on June 30. So let's take a somewhat detailed look at Interactive's latest foray into the UC market and how it's different from what you might expect in a newly launched cloud communications service.

Thinking Different, Part 1: Team Collaboration First
You may recall that when Interactive acquired OrgSpan last year its plan was to sell OrgSpan Select (social profiles for contact center agents) and OrgSpan Connect (profile-driven directory for enterprises) as standalone apps and as add-ons to its own solutions. That plan has completely changed.

OrgSpan, which was founded by a former Interactive employee and in part funded by Interactive, no longer exists as a separate company. Rather, Interactive has completely absorbed the company, retiring the standalone OrgSpan apps in the process.

Meanwhile, Interactive's PureCloud Social Customer Service, a rebranding of OrgSpan Select introduced in a 2014 press release and expected to become generally available by the end of last year, hasn't materialized, despite this product page. Interactive said it plans to release it sometime down the road. OrgSpan Connect, for its part, was rebranded PureCloud Directory, which Interactive launched in January 2015 but subsequently discontinued as a distinct product. The OrgSpan Connect/PureCloud Directory technology lives on in PureCloud Collaborate, providing underlying directory and messaging capabilities.

So the plan now is to deliver an entirely new set of PureCloud-branded services: Collaborate, Communicate, and Engage. Collaborate, offered as a freemium service, is a team collaboration app with a feature set highly comparable to Unify Circuit, Cisco Spark, Slack, and the many other such apps that have burst on the scene. PureCloud Communicate is a business telephony-centric service that, combined with PureCloud Collaborate, provides a complete hosted UC service.

That is to say, Communicate builds on Collaborate. Businesses wanting hosted UC from Interactive first sign up for PureCloud Collaborate. This gets them: 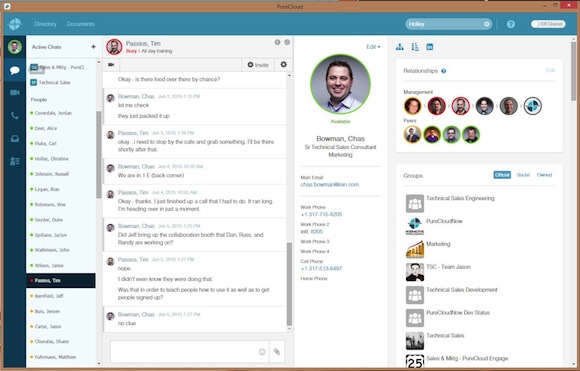 Without enumerating all Communicate features (which you can get here and here), what interests me most is how Interactive has essentially made its hosted PBX service an add-on to its team collaboration app. Communicate brings PBX features, IP phones, unified messaging, IVR, fax, call recording, PSTN calling and other business telephony features to Collaborate, while Collaborate gives Communicate IM and group chat, document storage and sharing, and desktop video conferencing.

There are, of course, others that do this sort of thing. Bitrix24 is the one that springs first to mind, mainly because I profiled the company earlier this year in my team collaboration slideshow here on No Jitter. But the UC vendors we usually talk about here generally don't take this tack, for either their UC or team collaboration services.

Thinking Different, Part 2: Hybrid
OK, let's move on to another way Interactive is thinking differently when it comes to hosted UC services.

PureCloud Collaborate lives up to its name, in that it's a purely cloud-based service. PureCloud Communicate, on the other hand, is not. Instead it uses a hybrid architecture that places some of the intelligence in the network and some on the customer premises. When a business subscribes to PureCloud Communicate, it receives an appliance, called PureCloud Edge, that functions as a SIP gateway, media server, application server, session border controller, and local survivability appliance.

Service providers' SIP trunks terminate on Edge, since -- at least at first -- Interactive is taking a "bring your own provider" approach to PSTN and WAN connectivity. (Interactive hints that it may later provide an over-the-top service of its own, but it's not clear when or where this will become available.) PureCloud Edge routes all calls to and from the PSTN. It manages audio recordings and provides call encryption. And it delivers IVR, voice mail, audio conferencing, and speech-enabled auto-attendant functionality when in survivability mode.

To be perfectly honest, I'm not 100% comfortable describing this as "hybrid cloud." PureCloud Edge mainly functions as a gateway that terminates SIP trunks. Almost all of the intelligence that powers the Communicate service resides in the network, with Edge providing call control and whatnot when the WAN link is down and survivability mode kicks in. I wouldn't call Sprint Complete Collaboration (or any other hosted UC service based on Cisco Hosted Collaboration Solution, or HCS) "hybrid" just because a router with Survivable Remote Site Telephony is deployed on premises. But a couple of applications -- call recording and call encryption -- do reside specifically in PureCloud Edge. So perhaps that's enough for it to fit into the generally ill-defined "hybrid cloud" category

Currently having a PureCloud Edge appliance on premises is required when customers subscribe to Communicate. Interactive said it will eventually provide an option in which Edge functionality resides in the cloud, but in this scenario it wouldn't be able to provide local survivability. 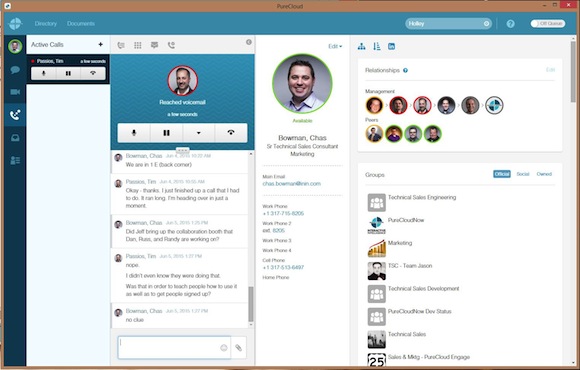 Thinking Different, Part 3: Amazon Web Services
Others have talked plenty about how the PureCloud services run in the Amazon Web Services (AWS) cloud. In his TalkingPointz blog, analyst Dave Michels noted that this provides the service with "tremendous scalability, reliability, and a global footprint" and Interactive with "a cost advantage initially that will likely grow over time." And in her No Jitter post, analyst Sheila McGee-Smith said that by using AWS Interactive can "concentrate on application development, not on building utilities."

The latter point should help Interactive roll out PureCloud internationally without having to build infrastructure in each region. At launch the service will be live in the U.S., Canada, Australia, and New Zealand. Businesses in other countries can subscribe to it, but the service will be hosted from one of these four countries, which is also where documents stored on PureCloud Collaborate will reside. This will be an issue for businesses with data sovereignty sensitivities, so Interactive will quickly have the service running on Amazon infrastructure in other countries, with the U.K., Germany, and Japan the top priorities.

Of course this isn't the first time a hosted UC provider has offered service from a public cloud environment. Six years ago Unify (then Siemens Enterprise) introduced a pay-as-you-go UC service based on its OpenScape UC and OpenScape Voice software running on Amazon Elastic Compute Cloud. But this was just a proof of concept. When OpenScape Cloud Services launched in 2011 it was no longer running on Amazon infrastructure. At the time I asked about the change, and Siemens Enterprise said AWS wasn't really ready to be the platform of a real-time business communications service. Then again, Siemens Enterprise wasn't really ready to offer one, since it soon withdrew its hosted UC service. Regardless, whatever issues Siemens Enterprise had with Amazon are probably not relevant any more. Years have passed, and AWS has evolved... presumably to the extent that running real-time communications services on it is no longer an issue.

I'm still a bit fuzzy on how businesses really benefit from a UC service running in a public cloud environment. I asked Interactive about this at the company's Interactions 2015 conference earlier this month, and got this explanation: Because PureCloud is based on Amazon IaaS, its services can be set up more quickly, and users can be added and removed on the fly. But I've heard that instant scaling up and down capability called out as a benefit of other cloud-based UC services, too. I'm not sure running them on Amazon, Google, or Azure is really required for that.

So while I'm looking forward to Interactive, Avaya, and Alcatel-Lucent Enterprise proving that offering a hosted UC service running in a third party's cloud service is a viable deployment method, going forward I'm hoping for some nice hard facts on how subscribers benefit.

By comparison, providers offering hosted UC services based on Cisco HCS had to wait years to add a hosted contact center component, and they still don't have what they need to deliver a proper multitenant service based on HCS. Avaya's new hosted contact center service running on Google Cloud is based on IP Office, but does not yet provide any of IP Office's business communications capabilities on a hosted basis. Neither add team collaboration to the mix of features, unless Cisco integrated Spark with HCS while I wasn't looking. And Microsoft Skype for Business still lacks any kind of native contact center capabilities, at least beyond Response Groups.

There are, of course, plenty of examples of services that do combine various levels of collaboration, communications, and contact center capabilities. But my point here is that this is usually something that a provider gradually works toward, whereas with PureCloud they're all there from the get-go.

Separately, while Interactive's on-premises contact center and communications solutions are based on the same technology as its single-instance communications-as-a-service offering, not so with PureCloud Communicate and PureCloud Engage. Interactive built these two from the ground up on an entirely new code base. This is good in that PureCloud isn't on-premises technology being shoehorned into a multitenant service. But it will complicate things for businesses looking for hybrid cloud deployments that try to connect PureCloud to existing Interactive software on-prem.

Wrap-up
Going through my notes from the Interactions event, here are some of the stray bits and bobs that I couldn't work into the previous sections:

So that's where things stand with Interactive's latest foray into the UC market. The company has long wanted to broaden its horizons beyond the contact center space, and UC has been a logical place to start. As PureCloud Communicate matures -- with an expanded feature set, expanded geographical availability, localization, and dedicated set of resellers -- Interactive has a new opportunity to become the provider of UC solutions and services that it has long wanted to be.