Getting Real About the Cloud

For all the predictions about cloud UC growth, I don't see any indication that anything fundamental is changing.

When I was a little kid, my aunt told me that you could split clouds with your mind. Just stare at them and concentrate, she said, and tell them to split. I tried it. Sometimes it worked, sometimes it didn't. I was old enough to realize that it was just coincidence when the cloud I was staring at did split; but I was young enough to retain a tiny hope that maybe it wasn't all coincidence.

I'm kind of feeling that way about the cloud today, in the enterprise communications space. There are a lot of people staring at it, attempting to will it to do what they command it to do, which generally is to vanquish the CPE model for enterprise deployments. And, indeed, they're seeing some results -- sometimes enterprises do move some or all of their communications to the cloud. For example, Marriott recently made a splash with a move to Verizon's UC cloud; Marriott exec Bob Galovic will be discussing the move at Enterprise Connect Orlando, at our opening general session panel discussion with end users. 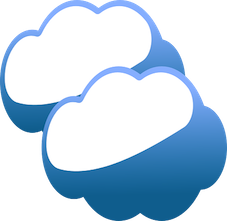 But for all the predictions about cloud UC growth -- and for all the realities of significant percentage increases off a small base -- I don't see any indication that anything fundamental is changing. Cloud is absolutely an important megatrend in IT, which means it's bound to affect communications. It may be the right strategy for your enterprise -- depending on what your goals are. But some fairly intractable-looking obstacles persist.

We're going to get a reality check on the cloud at Enterprise Connect Orlando in a couple of weeks -- in fact, that's the name of the session, "UC in the Cloud: A Reality Check." Nemertes Research analyst Irwin Lazar is presenting the session, and much of his talk will be based on Nemertes data. I got a sneak peek at Irwin's presentation; if you're on the fence about the cloud, I encourage you to go to the show (of course) and attend Irwin's session to get the full context. Irwin has a very measured, balanced take on the cloud, so let's be clear that what follows here is my read on his data.

Among those considering UC in the cloud, 44% are doing so to "reduce costs," according to the Nemertes data. The next-most-popular answer, at 29%, is "improve agility." Among those rejecting the cloud, cost is cited by 50% of respondents, followed by security, 29%, and privacy/governance, 14%.

When Nemertes looks at typical 5-year cost projections, we can see where the dichotomy arises. In the small-company scenario (80 users), the 5-year TCO for the on-prem option is 23% higher than the cloud. But in the large- company scenario (5,000 users), it's just the reverse: The cloud option is 21% more expensive than on-prem.

As a result, several providers are thriving by selling UC as a service to the small-to-medium market. Most of these providers want to move up-market, but they'll have to grapple with the pricing issues that Nemertes' data reveals.

In addition to Irwin's session, if you want a look into the nitty-gritty of cloud vs. on-prem options, consultant Dave Stein's RFP session at Enterprise Connect is the one to check out. We started this RFP session years ago, when IP-PBXs were just emerging and the question was: Can you buy an IP-PBX that meets your enterprise's requirements, and if so, what will it cost? As IP-PBXs became mainstream and UC emerged, the questions centered around whether you could avoid an IP-PBX purchase via an acquisition strategy that aimed instead at layering newer UC features and functions on top of a legacy PBX. The last couple of years, the session has increasingly focused on the cloud-vs.-premises question.

Dave previews his RFP session in this No Jitter post, and what's notable to me is that of the nine participants he identifies for the session, five are cloud and two others are a hybrid cloud-premises model. That breakdown surely doesn't reflect the relative sizes of the markets today for cloud and CPE, but I think it probably does reflect where the majority of the new news is.

So if you're able to get down to Orlando for Enterprise Connect 2015, you'll have a chance to get the full range of viewpoints and perspectives on where the cloud is headed for UC, and whether UC is headed into the cloud. I hope you can join us.