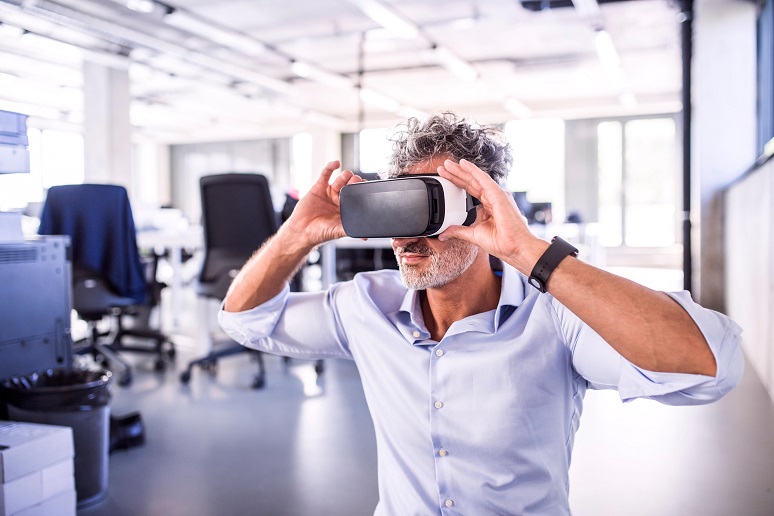 Image: Westend61 GmbH - Alamy Stock Photo
Late last year, wireless guru and fellow BCStrategies colleague Michael Finneran wrote a follow-up piece to a post I had written titled “Wireless Networking for the Metaverse.” In the post, he asks several pertinent questions about the metaverse and its networking requirements. While it is impossible to answer this question fully, as we don’t even know what the metaverse will become, I will attempt to address what we do know and provide some insight on the needs of virtual reality (VR) and augmented reality (AR), as they apply to networking infrastructure.
The metaverse has a lot of unknowns, but we do know that it includes a mix of technologies, like VR and AR. While these technologies often get grouped together, they are very different and have different use cases. From a networking perspective, we will first talk about the similarities then dive into the differences.
How AR and VR are alike
Both AR and VR are currently delivered through headsets, such as the Microsoft HoloLens 2 and Meta Oculus Quest 2, respectively. Since these technologies are either replacing or augmenting your view of reality, the underlying networking is critical for several reasons. Early versions of VR, and most high-end devices even today, require a tether to a powerful gaming-type PC, where networking is less of a concern due to the wired connection. In the last few years, the shift to wireless VR and AR headsets has been in full force, allowing users to move around much more freely without cords attached.
As the shift to untethered headsets progresses, the following network challenges must be addressed to provide for a good user experience in the context of enterprise collaboration in AR and VR.
1. Latency — While it is obvious that latency is a concern in any real-time collaboration app, it is critically important in AR and VR. The idea with VR collaboration is to feel like you are in the same place — delay in the delivery of voice packets can throw this off. And even things like the timing of hand gestures, especially when there are only a few non-verbal cues, can be thrown off with latency above .5 seconds.
Another issue with untethering the headsets is that graphics processing now has to be done inside the headset rather than on a PC. Currently, Oculus solves this problem with mobile processors in their Oculus Quest 2 headset. While this works pretty well, VR is highly graphics-intensive and is limited by the power of the mobile processor. One way to get around this is to leverage the cloud for graphic processing, just like Google does on their Stadia gaming platform. On Stadia, you can play a complex game in a web browser, as the cloud does the processing, and the browser streams the output. VR could go the same route, but now latency is even more important; it becomes a critical factor in VR and AR success. Even small delays of 30ms can cause discomfort and even sickness. Harnessing the power of remote graphics processing is exciting, but if the infrastructure can’t support it, it will literally make people sick.
2. Bandwidth — Bandwidth is another concern, especially when streaming content to the headset. I was speaking with folks from Extreme Networks at their partner conference last fall about this very subject, where I was reminded not to forget about density. A situation might occur where there are multiple VR or AR headsets in the same area, all competing for radio spectrum and bandwidth. If a group of users are sharing a virtual 360-degree 8k video simultaneously, bandwidth could become a problem quickly.
3. Consistency — As with any voice or video application, consistency is extremely important. Even small interruptions to a collaboration session can provide a poor experience. Glitches, jitter, freezes, and other real-time communications abnormalities are frustrating, especially when you are trying to create an immersive experience.
How AR and VR differ
Now that we’ve addressed the challenges they have in common, let’s turn our attention to how they differ. Some ways they differ include:
It is worth noting that Apple rumors on AR and VR devices abound. If they can leverage the graphics processing and 5G that already exist in modern iPhones, they can develop sleeker headsets with better battery life, making them ripe for mass adoption. This could prove a huge advantage in this wide-open market. Another aside, leveraging an iPhone for VR and AR would require a high bandwidth local connection from the phone to the AR/VR device, something like Ultra-Wideband that Apple recently rolled out. But that subject is another post for another day.
While we don’t know what the metaverse will exactly become, we do know that planning ahead will be critical for its success in the enterprise. The network requirements discussed in the post aren't all unique to AR and VR, but the rapid growth that is coming shouldn't be something that catches organizations by surprise.