What Keeps You Up at Night?

Continuous change, cultural upheaval, and security breaches are but three nightmarish issues for IT.

With the end of the year rapidly approaching, it’s a good time to reflect on our industry from a macro viewpoint. What major challenges did IT face in 2018, and what will they come up against in the new year? Are there solutions? IT management certainly loses sleep on a whole host of these issues.

Companies can no longer afford to wait to modernize. There is a bottom-line business imperative to moving at a fast pace. Failure to do so will likely result in significant advantage for competitors that are able to embrace this approach. Additionally, the IT upgrade cycle never ends. This modernization effort presents huge risks for CIOs and the entire IT organization as infrastructure and process must change dramatically (depending on the starting point).

When assessing an IT organization’s ability to support change, I often use a version of Maslow’s hierarchy of needs adapted to IT, as shown below: 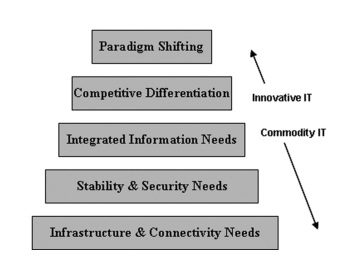 I couldn’t find any research showing percentages of IT organizations performing at the top of the pyramid. But based on my consulting engagements and observations, as well as discussions with other consultants, most IT organizations seem to be in the middle of the stack.

CPaaS for custom applications, such as a Vonage customer’s “soggy french fry” example

Artificial intelligence for use in customer service/experience, augmenting human agents. LivePerson is working with IBM Watson to deploy a “bot assistant to the agent” model. It is utilizing specialized bots for handling the most routine and simple tasks.

Scale and agility using available public cloud tools, such as Amazon Connect . For this contact center service, in use at CapitalOne, Amazon Web Services uses a pay-as-you-go model that doesn’t bind customers by fixed licensing costs.

Readers who have heard me speak at Enterprise Connect or a BCStrategies conference know that I like to discuss the impact of an organization’s culture on its ability to affect change. Culture is one of the most significant barriers to digital transformation, as widely discussed. This includes culture within IT as well as the entire organization.

The question, ”how do we change the way we do business?” has kept CIOs and senior managers up many nights. A few years ago, I was the lead consultant on a network infrastructure replacement project for the largest university system in North America (approximately 300,000 hosts on 23 campuses). The technology choices and deployment decisions were relatively easy. The cultural issues were enormous, with IT encountering resistance at many levels due to changes such as:

This project reinforced a number of points for me. Having change pushed from the top management down isn’t enough. Those empowered to make changes at every level have to address resistance on an everyday basis. In the university example above, the changes were mostly contained to the IT organizations.

Another recent consulting engagement involved constant re-negotiation between IT and user departments as to what features would be deployed and on what schedule. This necessitated IT to modify the original plan (previously agreed to by all) several times and led to budget and deployment challenges at this public sector organization.

It seems that a week doesn’t go by without a major security incident being reported, with the Marriott breach of information on 500 million guests over the course of four years being the latest. Following on the incidents at companies like Target, Equifax, and Yahoo, this latest example supports the theory that you can’t keep the bad guys out. A recent Krebs on Security article suggests that IT management must adopt an approach that includes philosophy, people, process and technology, as shown below. One of the key suggestions is that the security function report directly to the board and CEO, bypassing IT management altogether. 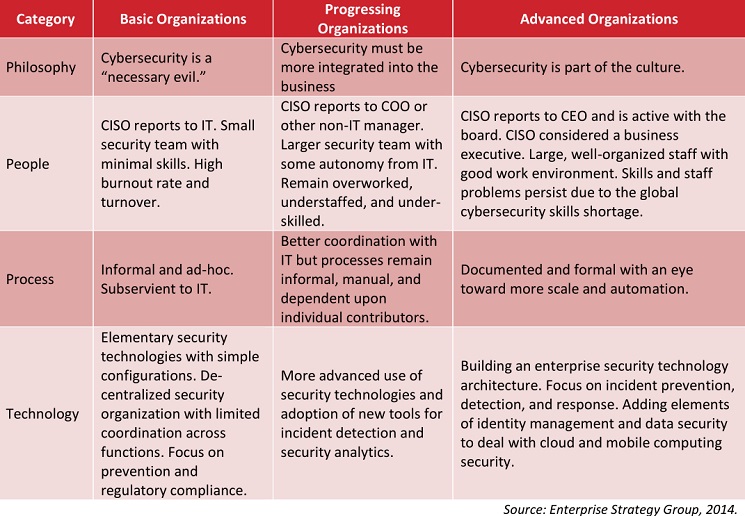 The three topics I discussed above (continuous change, culture, and security) each possess the ability to be career-limiting for senior IT management if not handled properly. For example, shortly after the Target breach both the CIO and CEO resigned. There are other areas that worry IT managers as well, including:

The list could be longer. Clearly the number of issues that CIOs and CTOs must worry about is large and growing. No wonder they don’t get much sleep!