Desktop telephones are not going away any time soon, but shipments will decline and alternatives such as PC soft phones and cellular extensions will experience dramatic growth.
Allan Sulkin

I thought I would throw my two cents into the debate about the replacement of desktop telephone instruments by alternative choices, such as PC softphones and mobile smartphones. There are good supporting positions on both sides of the issue, but there should be no doubt that wired desktop telephones have had their day in the sun and the forecast is more than a little cloudy.The business telephone became a ubiquitous presence as the 20th century progressed, but its status as the primary interface to the enterprise communications network has already been eclipsed: the number of business emails and IMs originated and terminating on PC terminals far exceed traditional voice calls. If anyone has any doubts, compare the number of messages waiting for you in your email box compared to your voicemail box any day of the week, including Sundays and holidays. The collective number of smartphone contacts (voice and text) will also exceed business desktop telephone voice calls during the next few years (if it hasn't already).

Technology moves on as new products replace old products. Examples of death by technology abound. In a recent post I referred to the passing of the typewriter, a product initially replaced by word processors, shortly followed by PCs. Viewership of cable television programming eclipsed over-the-air broadcast network fare after a 30-year battle. And the Internet has struck a fatal blow to many print newspapers and magazines on top of a declining readership habit exhibited by the younger generations. A spate of recent articles about the death of local newspapers, including feature stories in this past weekend's NY Times Magazine and the current issue of Time, should not have been a surprise, because many saw it coming many years ago: Craigslist and Google were just the final knives that decimated advertising revenues. With hindsight, the first CTI wave in the early 1990s was only an early warning signal for desktop telephones; this decade's IP telephony systems and 3G wireless networks have proved to be the real thing.

Closer to home (literally speaking) is the declining number of residential voice wireline subscribers. This has been playing havoc with telco financial results as cell phone service and VoIP solutions such as Skype eat away at the traditional residential telephone base. It is very important to note that the majority of residential customers are not yet ready to abandon their trusty telephone instrument; just like most business station users continue to believe they cannot depend on soft phone or mobile technology to replace their highly reliable wired desktop telephones without grave consequences. But the handwriting is starting to appear on the walls and the traditional bedside phone has been supplanted by the mobile handset in many households. Today's youth are equipped with a cell phone from the time they go away to kindergarten and are likely to view the kitchen wallphone as an archaic remnant of their parents' upbringing.

A PowerPoint slide I have prepared for my market review session for VoiceCon San Francisco 2009 reflects my belief that desktop telephone instruments are not going away any time soon, but that shipment totals will decline and alternative options such as PC soft phones and cellular extensions will experience dramatic growth as time progresses. One reason for strong soft phone and cellular extension growth is the price factor: Price bundling by leading system suppliers, such as Cisco Systems and Avaya, has greatly reduced once costly station user license options to virtually free giveaway levels. This conforms to my long time held PBX Trickle Down Theory that yesterday's expensive software feature option is included as part of today's standard package. 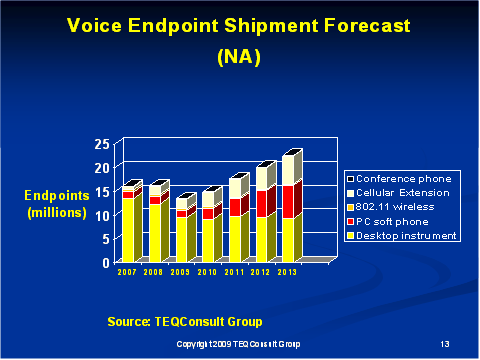