Last month's bold move by Cisco, appealing to the European Commission to impose restrictions on the already approved Microsoft-Skype merger, brings new meaning to the technical term "chutzpah" in the IP communications world. It also promises to make our upcoming session on "Interoperability--What is it and how do you get it" (27 March 8:00am) a potential fisticuffs experience at Enterprise Connect.

Those who have followed the videoconferencing industry for any length of time will be very familiar with the history of mergers/acquisitions, lawsuits, patent claims, and outright hostility between competitors. But fundamentally the issue since the 1980s has been the dynamic tension between industry standards, which in the communications world are defined by the Geneva-based ITU's Recommendations, and proprietary protocols, which most developers feel provide superior performance for their own products. Theoretically, products that comply with industry standards can interoperate. (Interoperability and standards have been the core religion in fax and telephony since 1886.)

In reality, this is mostly true for videoconferencing, but not always; and when it is true, it doesn't always give the best result--i.e., systems from different vendors can connect, but may not provide the optimum quality of experience. Systems that are not interoperable cannot connect at all. Further complicating the videoconferencing scene (and UC as well) is that the nice thing about standards is that there are so many to choose from.

Some "protocols" or solutions become industry standards by default. A classic example is Microsoft Windows, clearly a proprietary technology, but so dominant that it is essentially an industry standard. Skype would fall into this category as well. While it's true that Skype is proprietary, the fact that it is being used by over 170 million users worldwide makes it almost an industry de facto standard. And the fact that it can be downloaded for free makes the argument even more persuasive.

In the videoconferencing industry today, we have many protocol islands, some of which are standards-compliant, like H.323; others are on their way to standardization, like SIP. Others are large, like Skype, and others are small but growing fast, like Microsoft Lync, and Apple's FaceTime. Users can talk to other users on the same island, but cannot communicate with users on other islands unless a special gateway is available within the enterprise or via a service provider. Gateways generally introduce cost, scalability and performance issues that are not present when "native" interoperability is possible. 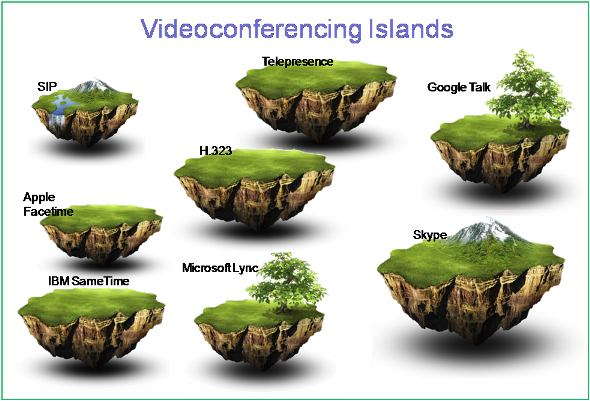 This brings us to the current Cisco-Skype situation and raises at least three questions: Why is Cisco doing this now? What does Cisco hope to achieve by this appeal? And how can we not see this as an example of hypocrisy on the part of the world's largest telecommunications equipment provider?

Why now? European Commission decisions can be appealed within a specified time frame, unlike the US Department of Justice decisions, and Cisco appears to have pushed the time frame close to its expiration date (see this interview with OJ Winge, SVP and GM of Cisco's Video and Collaboration Business.)

What is the goal? It is not practical to think that this appeal is aimed at undoing a merger that has already been approved. More likely, Cisco wants to see either the Skype protocol set put into the public domain (as the EC did with TIP when Cisco acquired Tandberg in 2010), or for the EC to somehow force Microsoft-Skype to adhere to industry standards themselves. Either way, the result would make Cisco's products interoperable with a much wider universe and ultimately more marketable.

How do we not see this as hypocrisy?
In 2007, with great fanfare, Cisco began shipping the CTS 3000 and CTS 1000 telepresence systems. It is not just that these systems interoperated only with themselves, providing the clearest example possible of a closed system--Cisco was proud of this distinction, claiming that videoconferencing, unlike its own "immersive" telepresence, was an inferior solution and that interoperating with the million-odd industry-standard room systems out there would have compromised the telepresence experience. Not interoperable, and proud of it.

Amazingly enough, many customers appear to have bought into this proposition. We have run into multiple end user organizations supporting two videoconferencing islands--the Cisco telepresence island and the industry-standards island--with no interworking between them. Cisco flip-flopped on this issue with its $3.4B acquisition of Tandberg, a company whose motto was "standards first" for many years.

Now consider these two recent Cisco executive statements. First, from Marthin DeBeer's blog post that announced the EC appeal: "Imagine how difficult it would be if you were limited to calling people who only use [sic] the same carrier or if your phone could only call certain brands and not others. Cisco wants to avoid this future for video communications, and therefore today appealed the European Commission's approval of the Micorosft/Skype merger to the General Court of the European Union."

And second: "We have always gone with open standards, it's the right thing to do on the video side," claimed CEO [John] Chambers in a recent teleconference with a group of reporters the week after the appeal was filed.

You have to love the motherhood-and-apple-pie exemplified by these claims. How can you argue against these goals? You can't. You can only point out that supporting standards wasn't always Cisco's goal in videoconferencing, telepresence, routers, and switches, or anything else. And to the extent that Cisco is worried about proprietary solutions, interoperability challenges for customers, and potential market dominance by a competitor, this is a prime example of the pot calling the kettle black.

What's at stake?
The big threat here to Cisco is that Microsoft will integrate Skype into Lync, thereby creating one integrated and proprietary solution that does audio and video, not to mention some PBX functions dear to Cisco's heart. So, rather than talk about being squeezed out of the competition, Cisco is using the impenetrable apple-pie-and-motherhood defense by claiming its intention is to foster the creation of open standards that make video communications easy for all to use--just like telephone and email communications are today. Hard to argue against that. Besides open standards, the other way to achieve interoperability is via a monopoly--that works when it's your monopoly, not when the other guy owns the business or technology.

I don't know if it would be fair to Microsoft, who just spent $8.5B to acquire Skype, but it would probably be a good move for the industry and for the customers if Skype/Lync were somehow standards-compliant. Wouldn't you like to be able to use your current video systems to talk to your Skype-enabled customers, partners, road warriors, and suppliers among those 170 million Skype users? Wouldn't you like to see Microsoft take it on the chin? We can't verify whether Cisco's claim with respect to the European Commission appeal that "the customers made us do it" is true or just a PR cover story, but the claim does at least make some sense.

Unified Communications
The thrust of the Skype acquisition and the Cisco parry is around videoconferencing, perhaps the application for which Skype is best known today. Cisco, via its Tandberg acquisition, has learned how to play the video interoperability game with Polycom, LifeSize, Radvision, Sony, and others. And new services like Blue Jeans Network are providing the interconnectivity between enterprise room systems and personal systems like Google, Skype, and Lync. In the UC space, we have another set of potential interoperability and market dominance battles between Cisco, IBM, Avaya, Siemens, and Microsoft. Here too, the integration of Skype into Lync presents a formidable challenge that surely is causing loss of sleep outside Redmond.

For the latest head-to-head confrontation, come to the Enterprise Connect session on interoperability, March 27 at 8am.