Cellular Service: Trust Is Hard to Come By

Given how convoluted and complicated cell plans can be, getting a call center agent who cares is critically important.

Who do you trust when acquiring hardware and or cellular service? Do you use retailers representing the carriers, carrier retail stores, or the carriers themselves? Your decision surely will impact your experience, if not your service.

You may make your decision based on a "great deal" -- but there really isn't any such thing -- you have to pay to use a cell network regardless. Either you pay month to month for the latest and greatest, or you lock into a plan and still end up paying month to month with the option of buying equipment outright. While you can find teaser plans and purchases galore, you still pay. I guess it's all comes down to how you perceive your "deal."

Forget about device subsidies and think about service. Here's what I learned in a recent weekend call to AT&T. You can subsidize your latest smartphone over many months but should you decide at a later date that you'd to buy it outright you can pay off your gear without penalty. That's what I did to escape having to add a line to my account. I paid for an iPad, and then added a new phone to the account using the line taken from the iPad. I save $10 a month because of the swap, and I can still activate the iPhone hotspot to use the iPad for surfing the 'Net.

Days later when I visited the carriers' retail store, I decided to opt for the monthly cost for the new iPhone; I paid taxes up front. Then, without my asking, the store added insurance -- which I only discovered after AT&T sent me an email a few days later explaining how my plan works. 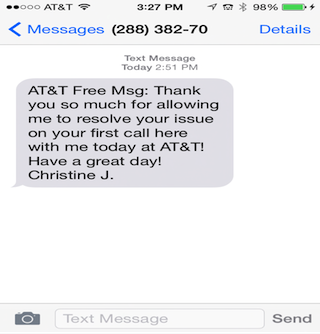 Normally I avoid calling any call center on a weekend because service often doesn't seem up to par. But having discovered I was paying for insurance I hadn't ordered, I had to call once again on a weekend. And, again, I learned something (but not from first agent, who couldn't understand that I did not want insurance and simply hung up on me). The next representative I reached, Christine, listened and quickly removed the insurance from my account.

Then Christine took the initiative to review all the charges on my forthcoming bill and explain them in detail. She offered to extend a promotion to me and up my data plan to 15GB at no additional cost. She also informed me that I could upgrade my iPhone and explained my options for doing so.

During our call, Christine even explained the sales differences to me between the carrier call center and the retailer and carrier retail stores. What I found interesting was that the franchise retail stores and third-party outlets are driven by commissions but, according to Christine, the employees working in the contact centers do not receive commissions.

The pleasant surprise when speaking to Christine was that her helpful demeanor and taking ownership of me as a customer shined through the engagement. Christine wins the award for truly making the contact center an "engagement center."

Getting just one phone plan right with two devices is challenging, imagine two or three hundred smartphones or more. Will mobile device management help in managing costs and negotiating deals? While there's no easy answer, who you end up trusting may take some maneuvering and more than one call, you can only hope to make contact with someone who actually cares.