Calabrio: Shifting from Premises to Cloud

Flagship product, Calabrio One, is '100%, every line and every feature, multi-tenanted,' CEO says.

Calabrio this week announced a new version of its flagship workforce optimization and engagement suite. Having watched the firm and its antecedent, Spanlink Communications, since its founding 30 years ago by industry veteran Brett Shockley, I'd be remiss if I didn't provide some historical context for the Calabrio we see today.

Calabrio was founded in 2007 as a product-oriented spin-off of the then product and services company, Spanlink (acquired by ConvergeOne in 2014). Calabrio's primary product at the time was the Cisco Agent Desktop, sold with every Cisco Unified Contact Center Express (UCCX) license and approximately 50% of Cisco Unified Contact Center Enterprise agent licenses. Calabrio had also begun building a workforce optimization suite for SMB contact centers (fewer than 200 or so agents) -- also initially designed to work tightly with Cisco UCCX.

In 2010, Calabrio's world changed significantly when Cisco announced its own agent desktop, Finesse. With the announcement, Calabrio shifted its mission toward workforce optimization (WFO) -- a shift it has made admirably. It was a wise move; Finesse has completely replaced Calabrio's solution in the Cisco contact center portfolio.

The WFO, now workforce engagement (WEM), market has been a two-horse race for more than a decade. As just one proof point, NICE and Verint are the only two leaders in both the 2017 and 2018 Gartner Magic Quadrant for Workforce Engagement Management. But in the past few years, one company has surpassed full contact center suite providers -- e.g., Aspect and Genesys -- to become the only visionary listed in those same reports, and that company is Calabrio.

This week's announcement does more than describe new functionality in the Calabrio One suite. It also highlights the shift the company is making from premises-based to cloud deployments. With its historically strong Cisco partnership, it's not surprising that Calabrio has more than 140 active Cisco resellers or referral partners. As a result of a more recent partnership with Avaya, Calabrio now also boasts around 25 Avaya channel partners.

Given the dramatic growth in the proportion of new contact center deals moving to the cloud, Calabrio has made several strategic decisions around optimizing its support of the market transition. First, as I learned from Calabrio CEO Tom Goodmanson in a telephone interview, the company rewrote Calabrio One four years ago to make sure that it was "100%, every line and every feature, multi-tenanted." Calabrio One, he added, is hosted in Amazon Web Services (AWS).

With an AWS cloud version of the solution, Calabrio was positioned to approach, and become, a partner to some of the cloud-only contact center solution providers. It highlights three of those in this week's release: Amazon Connect, Five9, and Serenova. "The cloud-to-cloud integration that we have with all of these cloud partners is native inside their Amazon accounts," Goodmanson told me. Notably, Calabrio was the first announced WEM partner of Amazon Connect, though several of Calabrio's competitors have since added integrations as well (e.g., Verint and NICE). 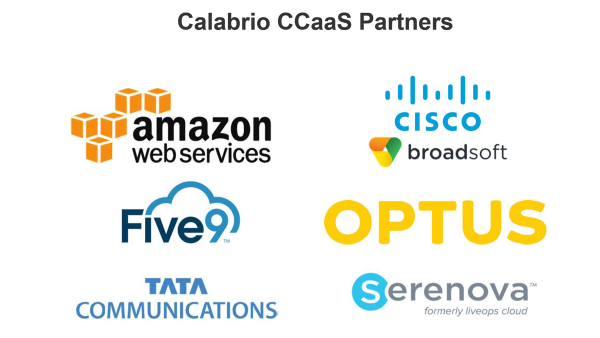 In addition to the cloud-only vendors, Cisco has cloud offers that Calabrio supports, both with its premises solutions and in the cloud. Cisco Hosted Collaboration Service - Contact Center, a single-tenant hosted solution that has seen significant growth for Cisco -- and Calabrio -- in the past two to three years. In addition, last summer, BroadSoft announced a partnership with Calabrio to white-label Calabrio One for BroadSoft CC-One, now a core component of Cisco Customer Journey Solution.

As seen in the graphic, Calabrio also has cloud contact center partnerships with Tata Communications and Optus, broadening the international reach of Calabrio One.

Calabrio has seen bookings for its cloud solution grow steadily since the beginning of 2017, across all of the partners shown in the graphic, Goodmanson reported. So, while more of Calabrio's revenue still comes from premises-based customers than cloud deployments -- as is true for most companies in the midst of the CPE-to-cloud transition -- Goodmanson sees the crossover point coming in the not-to-distant future.

Owned by investment firm KKR, Calabrio seems poised for its next journey, be that IPO or acquisition.