If Avaya were to acquire Nortel the combined Enterprise segment market share would be at least 35% and as high as 50%.
Allan Sulkin

Eric Krapf, No Jitter Editor and Lead Blogger, had an interesting post the other week postulating that if Avaya acquires Nortel ES the combined market share of the new company along with Cisco Systems would not constitute a duopoly or result in a two supplier-concentrated market based on Herfindahl index used by the DOJ in matters of anti-trust.Eric's analysis determined that the result would only be a moderately concentrated market and it was correct sourcing my recent No Jitter article on mid-year market share estimates, but (a BIG but) that was based on analyzing the overall market for customer premises communications systems, both KTS/Hybrid and PBX systems, and shipments to Canada as well as the US; the market data was for North America, not US, only. Although the latter issue would probably be a wash, because Nortel share is greater in Canada and Avaya/Cisco shares are lower, it may be more prudent to assess the situation by evaluating the Enterprise segment of the market where the three suppliers have shown far greater strength compared to the competition in recent years.

Two terms have risen to the surface in recent years for segmenting the customer premises communications market: Enterprise and SMB. The term "Enterprise" has replaced the adjective "large" to refer to the high end of the PBX market and the small and medium segments have been lumped together to form the Small/Medium Business (SMB) market. Many of the system suppliers and industry analysts have adopted these terms, though the line station size demarcation point between SMB and Enterprise is not consistent. One supplier may use 500 line stations, another 1400 line stations. I personally use 400 line stations based on my experiences and market analysis.

During my days at AT&T many years ago, we offered three PBX models to address the entire market: Dimension 100, Dimension 400 and Dimension 2000. The former two addressed the under 100 line station and under 400 line station market segments, respectively, based on capacity limits. The Dimension 2000 was the large system model with a more advanced feature set and redundant processing. Since AT&T still dominated the market 30 years ago, most market analyses used 400 line stations to distinguish small/medium systems from large systems. I continued to this demarcation point in my own analyses after leaving AT&T, used it in my annual Enterprise Communications Association (ECA) market reports a few years ago, and continue to do so to this day.

There are many system suppliers who almost exclusively target the SMB market segment, a few that exclusively target Enterprise, and several of the leading system suppliers target both, with mixed results. Though Avaya once was the leader in both segments, during the past decade it has focused its efforts on the Enterprise segment. Cisco initially targeted Enterprise, only, but eventually went down market with a few offerings. Nortel shipments to SMB and Enterprise are the most balanced of the three leading suppliers. Looking at the remaining system suppliers with market shares above 2%, for the overall market we find that most are focused and/or do better in SMB than Enterprise based on my line size demarcation point: Mitel Networks, NEC Unified, Toshiba, Panasonic, Digium, and ShoreTel. Only Siemens Enterprise Communications targets and/or does better in the Enterprise market compared to the SMB.

I estimate that Mitel, NEC, and Siemens each have about 5% of the US Enterprise PBX market, with smaller shares for all remaining competitors. In contrast, the market shares for Avaya, Nortel, and Cisco are much greater. I estimate Avaya at 25% to 35%; Nortel at 10% to 15%; and Cisco at 30% to 35%. More precise estimates are difficult to arrive at, because none of the system supplies includes line size breakouts in their shipment reports to industry analysts. My estimates are based on historical market share trends (and I have personally analyzed market shares every year for the past 30 years) and strong knowledge of the three system suppliers' market/product activities through analysis and personal interactions. If one is to look at the highest end of the communications market, above 1,000 line stations per system, the three leading system suppliers would have even greater market share estimates by at least a few percent. 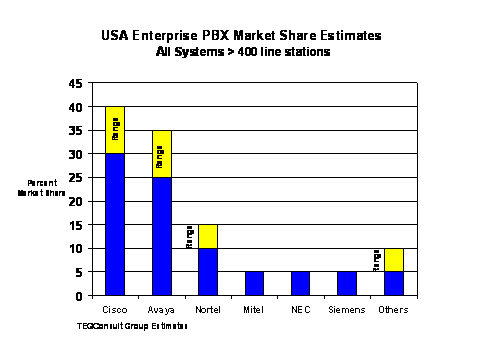 If Avaya were to acquire Nortel the combined Enterprise segment market share would be at least 35% and as high as 50% based on my estimates. Assuming Avaya/Nortel would have 42.5% market share (using the mean of the low and high estimates) and Cisco a 35% share (also the mean between the low and high estimates), the combined market shares of Avaya/Nortel and Cisco for the Enterprise segment would be slightly greater three quarters of the market. The approximate Herfindahl Index would be 0.4252 + 0.352+ 4*0.052 = 0.313125, an equivalent 3131.25 rating using whole numbers as Eric did in his post. The Avaya/Nortel market share by itself would be slightly above the high concentration level of 1800; adding the estimated Cisco share puts it far into the high concentration range. While it may not meet the pure definition of a duopoly (two market suppliers, only), it can be argued that Avaya/Nortel and Cisco meet the generally used term signifying market control by two suppliers.

If one were to look at the market for contact centers the combined market shares of Avaya and Nortel, by themselves, would make for a highly concentrated market according to the Herfandahl index. Avaya's current market share, based on agent seats, is about 40%; Nortel's share is below 10%, but certainly above 5% (last year it was about 11%). Any combined share above 42.5% would be sufficient to be above a 1800 level using the Herfandahl index formula. Without Nortel, Avaya has an outside chance to be a truly dominant market competitor for contact centers by year's end, but an acquisition of Nortel would most certainly guarantee it. Genesys Labs and Cisco are the market runner-ups, each with shares in the low to mid teens, less than one third of a combined Avaya/Nortel.

To put things in perspective, the US market for soda approximates the Enterprise-level CPE market, with Coca Cola and Pepsi Cola as the dominant suppliers; each has market shares comfortably above 35% when combining all of their brand offerings. There can be little argument that the two soda concentrate suppliers make for a concentrated (pardon the pun) market. They set the price floor and ceiling virtually all other suppliers use to adjust their own prices. When the price of Coke and Pepsi goes up, all other soda prices appear to go up, and when they down most competitor prices better go down or their sales will suffer. I don't know the price of a 2-liter bottle of Coke or Pepsi in your local supermarket, but it is definitely higher today in my area than a few years ago, after the leading soda suppliers concurrently raised their respective prices. The price of other soda brands has also gone up; my favorite brand, Dr. Brown (a long time staple of NYC kosher delis), just went up 20% after years of holding at 99 cents per bottle! Except for sales and supermarket generic brands you cannot find a 2-liter bottle for under $1 dollar any more.

When AT&T dominated the market based on its virtual nationwide monopoly, at one time controlling 90% of the US market, lease prices for telephony systems were far higher than today, not even taking into account the Consumer Price Index (CPI) factor. Only when the CarterFone decision opened the market to competition did average market prices begin to decline. After a decade the typical equivalent price per line in 1980 was still greater than $1,000 (more than $2500 in current dollars) when AT&T still retained 50% of the market; after 30 more years of competition the street price has dropped more than a third (and more than two thirds of the CPI-adjusted price), with system performance levels improved several fold by all estimates. Prices are always directly correlated with the number of viable market competitors, and when competition is diluted, the likely result is higher average prices unless the dominant suppliers foolishly enter into a price war. This becomes an important issue to remember when the result of the Nortel ES auction is finalized and its market share is added to the winner (assuming it is an existing system supplier).