Jon Arnold
Most of my writing has a singular focus, but sometimes you need to step back to see the forest for the trees. That’s what June was like, and after attending four very different industry events, I came away with some broad perspectives gained over a short period of time. That alignment of the stars doesn’t happen often, and I’ve distilled things down in this post.
Canadian Telecom Summit -- Privacy, Security, and the Surveillance State
The long-running CTS conference, in Toronto, is really the only major industry event in Canada for telecom. While the telecom focus is too narrow for the No Jitter audience -- and rather anachronistic for the times -- it’s the closest thing you’ll find in Canada for the overall state of communications technologies.
The best takeaway for me came during the cybersecurity panel, featuring Ann Cavoukian, who is best known for developing the Privacy by Design framework. We tend to look at cybersecurity through a technology lens, but the implications go much further, and panels this like help keep that bigger picture in perspective. 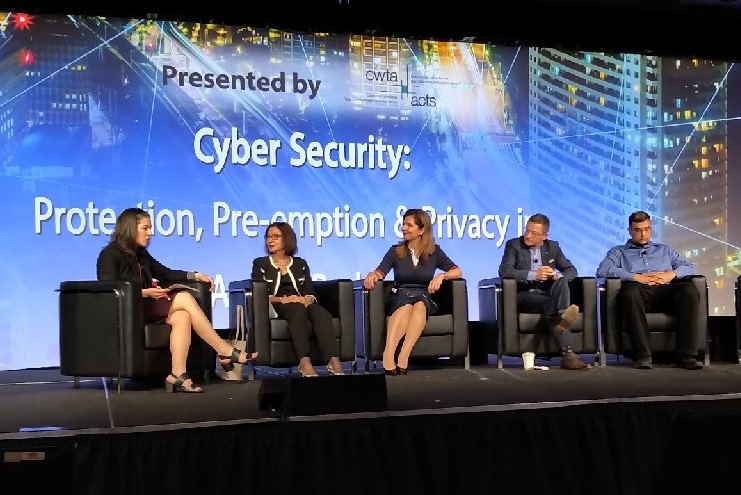 Like anything else, we must understand the problem set around cybersecurity before we can address it. In this context, the panel did a good job clarifying the distinction between privacy and security. When IT decision-makers listen to pitches from collaboration players about their cybersecurity capabilities, they shouldn’t overlook these nuances. Privacy is about personal control -- it’s very much about the individual, Cavoukian noted. Security , on the other hand, is really of greater concern to IT, where the need is to protect the network infrastructure and all the organization’s data flowing through it.
There’s a lot more to consider here, but the main idea is that security doesn’t ensure privacy. While the panel framed this in the realm of public policy and smart cities (Toronto is struggling to balance all this with its Sidewalk Labs initiative) -- the issues are equally relevant for enterprises. We’re getting into the “unchallenged, unregulated and unknown” as technology reshapes modern concepts of privacy, Cavoukian cautioned.
More pointedly, tech giants -- whose agendas may not align all that well with the public good -- are doing this reshaping. If we go too far down this path, we’ll be forced to make trade-offs between privacy and security. Conversely, if guided by principled forms of public policy, we can have both -- personal control over our privacy and a secure environment for all the data to slosh around in. This is an existential challenge for smart cities, and if there’s too much compromise, the surveillance state won’t be far behind. Again, the scenario will be no different in the enterprise, where technologies such as facial recognition and sentiment analysis are already being used to monitor almost every activity in the workplace.
As a sidebar and a perhaps uncomfortable segue, this panel included Huawei Canada’s chief security officer, who tactfully took the high road on this touchy topic. Earlier in the event, Huawei’s SVP of Wireless Research made it clear in her presentation that the company aspires to be a 5G leader. I wanted to mention this because most No Jitter readers in the U.S. will never get this kind of exposure to Huawei, but it’s certainly carved out a beachhead in Canada. Yes, we live in interesting times.
MISA 2019 -- Telephony Still Rules but Smart Cities Beckon
A day after CTS, I drove down the road apiece to Niagara Falls, Ontario, for the annual Municipal Information Systems Association conference, which provides a way for Ontario municipalities to get up to date with new technologies. I’ve done some work recently in this space, and the challenges are akin to what my BCStrategies colleague Marty Parker has written about when focusing on various verticals, such as this No Jitter post on state and municipal government operations.
Every vertical is at a distinct point along the legacy-to-IP spectrum, and when it comes to communications, the MISA world is still telephony-centric. Not only is that evident when talking with various municipalities, but it’s also reflected on the show floor where there was no shortage of telephony vendors. Municipalities may have a will to progress to UC, but finding the way is going to be a long journey. I see this as a stark reminder that some verticals are -- and will likely remain -- technology laggards and late adopters.
On another note -- and building on my CTS narrative -- I attended some interesting and forward-thinking sessions on smart cities. The vision for what’s possible is exciting, and some municipal attendees I spoke with are trying hard to follow this path. We all know about how cool the new technologies are, but presenters rightly noted how this is part of the bigger digital transformation wave, and success will be based much more on culture change and vision than what AI, 5G, IoT, etc. can deliver.
Click below to continue to next page