What 'ExtrAvaCade' Means to Enterprises

Management appears committed to minimizing disruption and delivering a long-term roadmap that leverages the strengths of the Extreme, Avaya, and Brocade portfolios.

Over the past year, Extreme Networks has been a disruptive force shaking up the networking landscape. In March the company bid $100 million for the Avaya Networking business and, shortly after that, it dropped another $55 million for the switching, routing, and analytics assets from Brocade, which Broadcom is in the process of acquiring.

Earlier this month Extreme got clearance from the bankruptcy court to move forward with the purchase of Avaya's networking business, but is waiting on the Broadcom-Brocade deal to close before it can proceed with the asset purchase. By the end of the summer, however, we can expect Extreme, Avaya Networking, and Brocade to become what I'll call "ExtrAvaCade."

As you think about Extreme's latest gambits, one of the interesting angles to consider is the number of major networking vendors that have been consolidated along the path to this point. Earlier this month at an investor event, Extreme CEO Ed Meyercord outlined how the "new Extreme" got to this point (see graphic below). Not to nitpick, but Meyercord could have included Ethernet and routing pioneers SynOptics and Wellfleet, respectively, as the building blocks of Bay Networks. Regardless, this is certainly an impressive list of companies that brought many innovative features to networking. 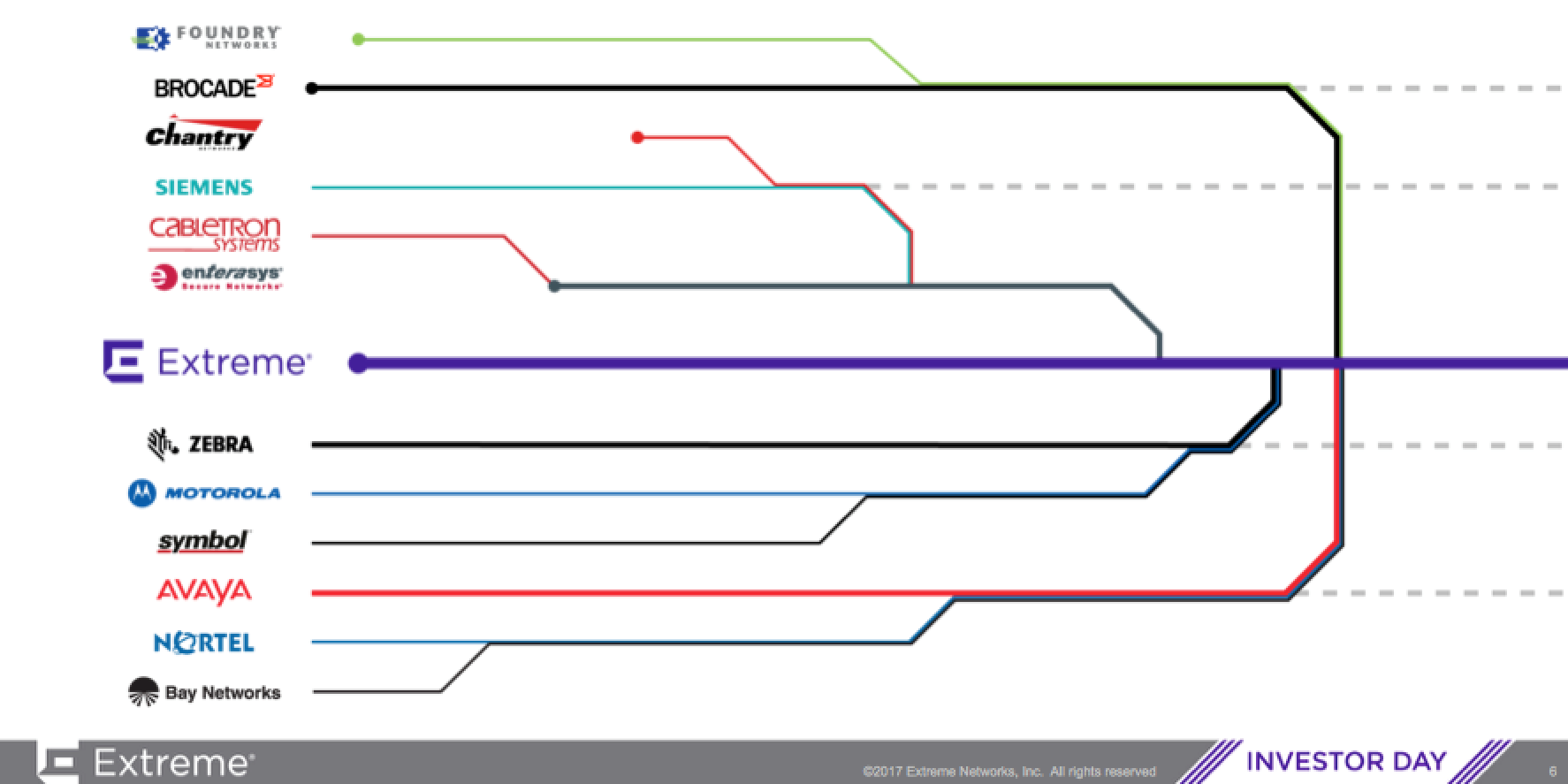 The impact of any of the names on the chart prior to Enterasys, which Extreme acquired in 2013, may not be all that obvious, but innovation that occurred decades ago lives on. For example, Nortel's split multi-link trunking bonding protocol is the basis for Avaya's Fabric Connect virtual network solution. This is to say Avaya and Brocade will bring some great technology to Extreme and create a much stronger company than the three individual organizations could ever have been.

With revenue north of $1 billion, the new Extreme will become the third largest enterprise networking provider and the largest pure-play. The larger size will bring benefits such as preferred pricing from suppliers like Broadcom, more sizable deals, better margins, and more investment in R&D. In networking, size and scale matter -- and now ExtrAvaCade has both.

On the surface it may seem like there is a fair amount of overlap between the three companies, but Extreme, Brocade, and Avaya Networking are actually very complementary. Extreme has an excellent campus networking portfolio comprising fixed form factor switches and a best-in-class Wi-Fi solution and Wi-Fi analytics. Extreme, for example, provides the official Wi-Fi analytics solution for the NFL, helping the league understand in-stadium mobile device activity so teams can improve their fan experiences.

As I've pointed out previously, Avaya has a much better networking solution than its share reflects. The networking business struggled to get the same level of airtime at the company's unified communications and contact center mainstays, but well over 1,000 customers do use its network products.

From Avaya, Extreme will inherit an outstanding chassis-based campus fabric, a data center solution aimed at midsize enterprises, and a couple of unique products such as its Internet of Things security solution, Surge, and its Open Networking Adapter (ONA).

From Brocade, Extreme will gain a high-end data center portfolio that can go toe to toe with any other network vendor's portfolio. This includes the VDX, MLX, and SLX switches, as well a number of software products including Flow Optimizer and Workflow composer. The latter is one of the best network automation tools on the market, and may wind up being a diamond in the rough for Extreme.

A number of Brocade and Avaya customers I've talked to have expressed some concerns regarding an accelerated end of life on products they recently invested in or are in the process of deploying. I can understand this given that Extreme has the messy integration with Enterasys in its history.

However, I've talked to the Extreme management team about this, and I can say with confidence that neither enterprise customers nor channel partners should be concerned. It's important to note that the leadership in place when Extreme and Enterasys merged is long gone, and that the Meyercord-led team is much more customer-centric. Also, I believe the management team has looked at what worked and didn't work in the past, and won't repeat the same mistakes.

In the near term, the company will continue to support the existing products and offer new products from the combined portfolio as appropriate. For example, an Avaya Networking customer would gain access to Extreme Analytics and a set of fixed form factor product. Or an Extreme customer could benefit from Avaya's ONA and Brocade's data center solution.

The key is the acquisitions will be additive for customers and won't take away support for anything they have already bought. Extreme has stated publicly, numerous times, that it has no plans to prematurely end of life any products from any of the three companies.

In the case of services, Avaya Networking customers will actually see their level of service go up. Extreme has a 100% insourced, best-in-class technical assistance center with experienced engineers that provide 94% first point-of-contact call resolution. Also, Extreme warranties are equivalent to or better than Avaya's, so customers will benefit in that way as well.

Much of the "bridging" of the product lines will be done in software leveraging Extreme Management Center. Historically this product has had a steep learning curve, so enterprises either loved it or hated it. At the financial analyst event, Extreme didn't get into details but did articulate that it had made progress in making it easier for more customers to use the full range of features.

So if you are a customer of Brocade data center, Avaya Networking, or Extreme, don't fear the merger of the three vendors. Embrace it instead as Extreme appears committed to minimizing any disruption that may occur as the companies come together and delivering a long-term roadmap that leverages the strengths of ExtrAvaCade.