Blue Jeans Network announced today that it has expanded its service to allow hosting of meetings up to 100 participants. I recently had the opportunity to speak with company CMO Jay O'Connor about the enhancements to BJN's video offerings, to figure out what exactly is the use case scenario for a video conference with 100 people.

According to O'Connor, two significant market shifts in customer attitudes toward conferencing sparked the enhancement; Blue Jeans discovered these trends via a recently commissioned survey. First, the survey revealed that 65 % of the 400 U.S. business professionals who responded prefer to conduct all of their online/remote meetings by video.

Second, respondents expressed a preference for a single integrated tool that could be used for all kinds of meetings, i.e. Web, audio and video, all in one. While years ago, conference organizers would have to decide in advance which type of meeting they wanted to conduct, today's business demands require an all-in-one video-centric approach for meetings, O'Connor said.

Use Cases
While the majority of video conferences may appear to be between select, small groups of people, there are actually numerous use cases where a larger conference might be necessary.

O'Connor detailed a few examples, including:

To manage these larger conferences, BJN added a few minor adjustments such as automatically muting participants, which is essential when you have 100 people breathing into phone lines simultaneously.

Meeting complexity
O'Connor also provided some interesting stats that highlight the growing complexity of endpoint environments. While the majority of conferences previously would take place with room systems, now only 20 % of endpoints in an average meeting come from room systems. Fifty-three percent of all meeting endpoints are accessed through personal computers. Further, over half of all meetings include one or more room system, while one-third include one or more mobile device.

As the average meeting becomes increasingly complex and made up of a multitude of different endpoints, it is important to have the appropriate tools that can support the ways people choose to interact. 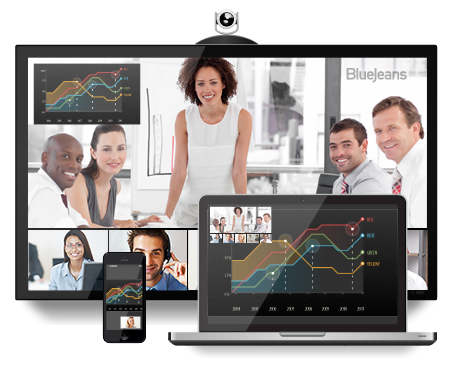 Recording Features
In addition to expanding the number of seats that can participate in a conference, Blue Jeans Network announced new record-and-share features. Previously, sharing a recorded conference would require one to send a file, which then had to be downloaded by the recipient. Now, all meetings can be recorded with the press of a button in the interface, and are kept online so that all you need to do is share a link with meeting participants or those who may have been unable to attend.

The survey unearthed a particularly surprising finding that supports the company's move to enhance these record-and-share features: 98 % of people would record meetings if the option was available. Further, 27 % of respondents indicated a desire to record every single meeting. Roughly the same percentage of people said they would specifically want to record those "ah-ha" moments when an idea was brought up, and 12% even admitted to wanting to record their own ideas in meetings to prevent their bosses from stealing the credit.

Shady bosses aside, survey participants admitted to a number of surprising behaviors that could be tackled with improved conferencing features. For example, 10 % of respondents admitted to checking their online dating profiles during a Web conference and 34% have taken another call during such meetings. Recording these meetings could help produce a group that is more focused on the conversation and business matters at hand, rather than whether someone sent them a virtual wink.