When network conditions are ideal, the online meeting experience will be great. But what happens otherwise is what really matters.

Of all the segments in the communications industry, the online meeting market has some of the heaviest competition. A number of up-and-comers, such as GoToMeeting (now LogMeIn) and Microsoft, have challenged Cisco, the market leader, over the years. But the latest thorn in Cisco’s side is Zoom, which seemed to come out of nowhere to make a brand for itself.

Making strides in a mature market is difficult, but Zoom has become a contender thanks to a combination of strong marketing and an easy-to-use interface.  Cisco and Zoom are two of the four Leaders in Gartner’s 2018 Magic Quadrant for Meeting Solutions, and LogMeIn’s bumbling around in this market has given Zoom an opportunity to be Cisco’s top competitor.

Last November, at Cisco’s Partner Summit, I had an opportunity to sit down with Aruna Ravichandran, then-relatively new CMO of the company’s Collaboration and Webex businesses (a new name to this industry, but well accomplished, with time spent at Juniper Networks and, most recently, at CA Technologies).  During our conversation, we talked at length about how Cisco is competing against Zoom.

The user interface for online meeting solutions has gotten a lot of focus.  Zoom’s user interface has always been dead simple.  Recently, Cisco has revamped Webex’s look and feel, and now does a number of things Zoom doesn’t. It has tight integration with hardware endpoints, the ability to move between meetings and teams apps, and some slick artificial intelligence and machine learning features.

That said, preference is a funny thing, as users often prefer what they know.  Personally, I prefer Webex, but I use it almost twice as often as I use Zoom.  Both are great, but I’m more familiar with one so that’s my preference.

There is an aspect to user experience that’s often hard to value until you see it.  Ravichandran touted Cisco’s ability to deliver a superior quality meeting experience than Zoom because it knows networking and security better than any other vendor in the world. However, not too long before our meeting Cisco did experience a prolonged Webex service interruption, which she said effected Webex Teams and a small number of Webex Meetings customers. The outage was the result of an automated script that deleted the virtual machines hosting the service, she said.  Since then, Cisco has rectified the operational issues and has put in place additional hardening, she added, reiterating that knowledge of the network is a core differentiator.

Evidence of this can be found in the following:

A Global Backbone Purpose-Built for Meetings: Since buying Webex in 2007, Cisco has built a massive global, private network for the service to run on. The global network supporting Webex features 10- to 100-Gbps redundant links among data centers, and total capacity of more than 1 Tbps. Its Internet and service provider connectivity encompasses 15 direct Internet and 18 Internet exchange peering locations with connectivity to 440 Border Gateway Protocol autonomous system numbers. This gives Webex Meetings a significantly better experience than Zoom users get from the over-the-top (OTT) company’s use of the Internet for transport. Network ownership is particularly important for long-distance connections, as a private network often performs anywhere from 2x to 10x better than an OTT approach.

Additionally, with Webex Edge Connect, Cisco offers enterprises direct connections from their sites to the Webex global backbone. This allows them to bypass transit points, ensuring great meeting quality while lowering costs. This might not be noticeable for email and Web browsing, but it can make a huge difference for voice and video.

Global Points of Presence: In addition to having its own network, Cisco owns and operates 22 data centers globally that have been purpose-built and optimized for Webex.  I’m not sure of the exact number of data centers that Zoom has, but I know it has a few private data centers that it complements with public cloud infrastructure. The use of public cloud providers allows for fast expansion, but limits its ability to control traffic.

Coincidental to this writing, just yesterday Zoom experienced a short service disruption that it attributed to a problem at AWS, which underscores the second point of failure. Webex traffic spends more time on the Cisco network between data centers than it does on the Internet -- which has a direct positive impact on the user experience.

Dynamic Quality Control: Initial audio and video quality are certainly important, but what’s even more crucial is how the products adjust to network issues to maintain a high-quality experience. Webex has a number of algorithms that enable Webex Meetings to recover from network congestion quickly, Ravichandran explained.  This kind of feature can be difficult to quantify on paper (versus number of data centers), so I asked Cisco to put its money where its mouth is and run a side-by-side comparison of Webex Meetings and Zoom that I could monitor.  It complied, and the results did highlight how fast its dynamic control works.

The tests started with both applications receiving more than enough bandwidth to run. As you’d expect, both products offered great quality at 720p, although Zoom Meetings had a higher frame rate and consumed about twice the bandwidth of Webex Meetings, as shown below. 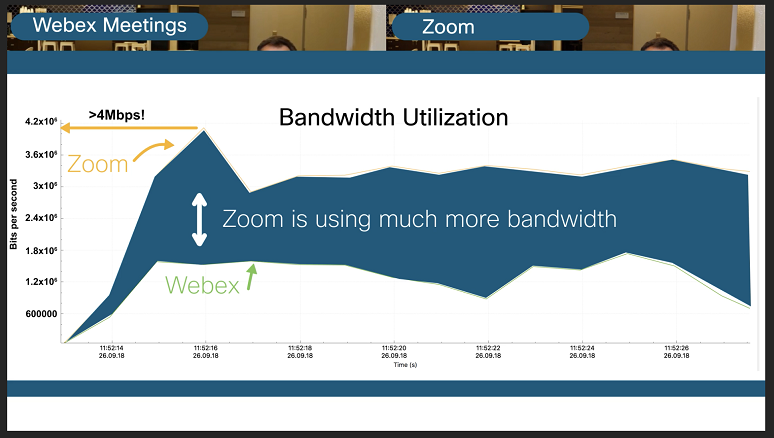 Once the sessions were established, I asked Cisco to introduce a 20% packet loss, such that could be caused by network congestion. The test showed that the packet loss caused issues and periodic outages on both platforms. The extra bandwidth that Zoom used let it recover faster as its rate shifted down to 360p. Shortly after, Cisco’s downgraded to 360p. However, once the packet loss was stabilized at 20%, Webex’s algorithms quickly increased video resolution back to 720p, while Zoom’s resolution stayed at 360p even after several minutes.  Zoom may have eventually recovered to 720p, but not within the testing window.  This can make a difference in picture clarity, with some details difficult to see.

I understand you might be skeptical, since Cisco ran the tests. However, I validated that the tests were run under identical conditions and the results were what they were.

Buyers must understand that all online meeting platforms will provide a great experience when network conditions are ideal. What’s important are when conditions aren’t perfect: Missed words, blurry video, and an inability to study body language could make the difference between a right decision and a wrong one.

Attend Enterprise Connect, March 18 to 21 in Orlando, Fla., for all the latest on video collaboration, including how to make huddle rooms work for you, the upsides (and potential downsides of using a cloud video service, and choosing the right software-based video solution for your meeting rooms. Check out the full Video Collaboration & AV track, and register today for our lowest rate -- Advance Rate expires tomorrow, Jan. 11. And, as a No Jitter reader, enter the code NJPOSTS when you register to save $200!