Dave Silke steps up to the CMO plate, as Wes Durow's next step remains a mystery for now. 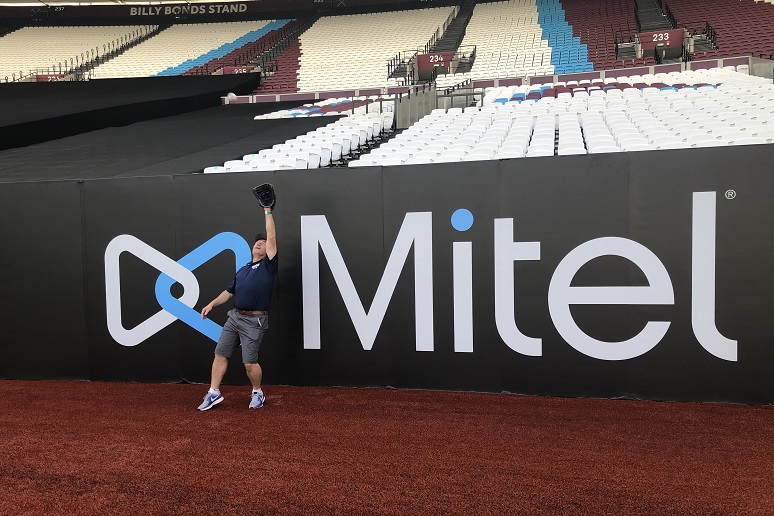 In a LinkedIn post, Wes Durow posted he was saying goodbye to Mitel, where he has held the position of CMO since April 2015. Where is Durow going? He’s staying tight-lipped about it, with the only clue being on his LinkedIn page where it says “CMO @ (Loading).” This begs the question, who is Durow’s replacement? That question was answered quietly this week as CEO Mary McDowell promoted current VP of international marketing, Dave Silke, to the position.
Given the current state of the world, instead of issuing a press release with the announcement, Mitel decided to make the transition quietly and focus on more pressing global issues, like ensuring its COVID-19-impacted customers can continue operating. Mitel has several smaller businesses for customers and non-profits that need the company’s help, and it has certainly stepped up. The Silke news rightfully took a back seat. Durow is well known and somewhat a communications icon, and his departure leaves a big hole to fill. So, it’s worth looking at the person replacing him.
Before I get into Silke and his qualifications for CMO, I think it’s worth a look back at Durow’s successful tenure at Mitel. When I think of Durow, I think of a person that’s consistently taken contender brands and enabled them to fight and compete vigorously. At Mitel, he built some great stories around digital transformation that helped grow brand awareness and media coverage. His greatest achievement was the deal he cut with Major League Baseball (MLB). Nowhere was this more apparent than at the London Series that featured the Red Sox and Yankees, where one could see a Mitel logo everywhere one looked.
The brand awareness put Mitel on the map and has helped Mitel become a leader in cloud communications. If one counts both public and private cloud seats, Mitel has somewhere in the range of five million cloud subscribers, which I believe puts them ahead of RingCentral. Much of this was driven by web efforts and lead generation execution. Mitel was once a small Canadian company that no one had heard of. Today, the brand is much more widely known and has some great customers, such as the previously mentioned MLB, Hyatt Hotels, and Carlsbad Breweries.
Silke has some big shoes to fill, and I believe he’s up to the task. I first met him at the 2019 London Series. While the man couldn’t swing a bat to save his life, he certainly came across as a person that understood the dynamics of the communications industry and has had his fair share of success and has been around the industry for a while. He started at Mitel in May 2018. Prior to that, he held senior marketing positions at Juniper Networks, Brocade, and Nortel Networks. Since his arrival at Mitel, he’s worked hand-in-hand with Durow.
Mitel certainly has several high-profile U.S. customers such as MLB and the Michael Johnson Performance Center, but under Silke, the company won some equally impressive international deals. The company went from a relative unknown in sports and entertainment internationally to having about 10 Premier League teams, including Liverpool and Tottenham. Last year, I toured the new Tottenham Stadium, and it’s a technological marvel that’s on par or ahead of most NFL and MLB stadiums. Mitel is a critical vendor for them. Also, Mitel has several key international accounts such as Orion Township, T-Mobile Netherlands, and Hedin Bil.
Another significant achievement is the partnership Mitel now has with the VFL Wolfsburg football (soccer, not American football), which plays in the Bundesliga, the top-tier German football league. Mitel inked the partnership at the beginning of this season, and the sports partnership will help expand Mitel brand awareness into Central Europe.
Silke is an excellent communicator and worked closely with Mitel’s international president, Jeremy Butt, to drive tight alignment between sales and all the marketing activities. I would expect him to use his experience with Butt to drive those kinds of activities across the company. He’s smart and has a tremendous amount of experience, and I expect Mitel to not skip a beat with Silke at the CMO helm.
I want to wish Wes Durow a fond farewell, and I look forward to seeing where he pops up next. I’m sure he’ll be tremendously successful. I’d also like to welcome Dave Silke to “The Show,” which is a baseball reference for him to look up.