Got your attention? Today Unify announced general availability of the solution formerly known as Project Ansible, and its sales strategy is worth a second look.

The new name is Circuit by Unify. At last week's industry analyst meeting in Scottsdale, AZ, CMO Bill Hurley offered solid reasons for changing the Ansible name. "Ansible is fantastic from an inside-out perspective. It really resonated with some of the key early people we worked with: employees and analysts." Hurley went on to say that the company ran beta trials for the past six months in "25-30 countries, with hundreds of seats active, and spent a lot of time explaining to them what the name meant."

What was less clear were the reasons the name "Circuit" was chosen. Hurley said market research was done, including focus groups, to "get to a term that customers would understand." He went on to say that the word circuit would have different meanings to different people and groups - and that is certainly true. Dictionary.com offers 12 uses of the word "circuit" as a noun, another two as a verb, and one as an idiom.

As one who was never that crazy about the name Ansible, I welcome the change. As someone who started as an AT&T international operator in the 1970s, circuit has very clear references for me, e.g., "we only have 6 circuits to Havana." I remain to be convinced that it is a word that a key target audience, Millennials, will find compelling. I suspect that time – along with Unify marketing treatment and budget - can eventually ease the tentacles of the Project Ansible name. That said, Unify executives were certainly having their challenges with leaving the term behind.

Brian Riggs has done an excellent job reviewing the features of Circuit, available now and scheduled for the near future in his No Jitter post Unify's Circuit: Looking Toward a Single Pane of Glass. I will focus on innovative plans that Unify has for selling Circuit. As I discussed in a post earlier in October, Unify's plan is to be more channel-centric. The direct/indirect mix is currently 75/25, and EVP of Worldwide Channels Jon Pritchard said last week that the goal is to move the indirect portion to 45% within two years.

That still leaves a sizable portion of sales that will continue to be made direct, and there was a very specific sales strategy discussed last week for Circuit sales. Unify is deploying a "pod" strategy for creating inside sales teams; the company says the technique has been successfully applied to the selling of SaaS solutions by other firms. 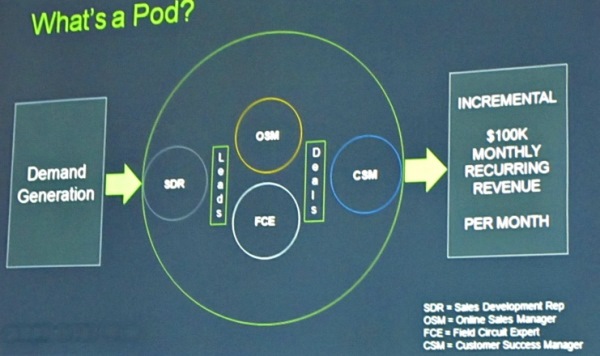 Pods are intended to be self-contained sets of functionality, where decisions can be made quickly. Unify's approach uses six people per pod: three Sales Development Reps, an Online Sales Manager, a Field Circuit Expert, and a Customer Success Manager. The first two Pods have been deployed in an office in Santa Cruz, CA; the rationale is that there is access to a Circuit application-friendly sales force of Millennials hoping to choose the surfer lifestyle and lower cost of the ocean town over the rat race of more traditional Silicon Valley towns or San Francisco. Two more pods are planned, another in California, and one in Dallas.

Layered on top of the Pod sales organization will be a vertical approach to selling, with five focus industries identified by Unify: government, finance, manufacturing, higher education, and healthcare. Today this means primarily marketing collateral and use cases specific to industries, but over time should also mean integration to vertical-specific enterprise application software.

Unify's new direct sales leader, Norm Korey, is a former AT&T and IBM sales professional – two companies that have a reputation for sales professionalism and execution. Both were evident in Korey's presentation and comments – including a remark that 30% of the existing sales reps have been replaced in the last 120 days.

I find myself wishing the new team well... fully cognizant that their probability of success against entrenched competitors is likely below 50-50.