Twilio and Flowroute are favored over large telcos, the Eastern Management Group has found.

In a new SIP trunk customer satisfaction survey, the Eastern Management Group has found that small, often young, SIP trunk providers are receiving the majority of accolades from IT managers globally. Twilio, for example, ranked higher than the competition, landing among other Top 10 Leaders such as 8x8, BroadSoft, Flowroute, and Onvoy (now Inteliquent). 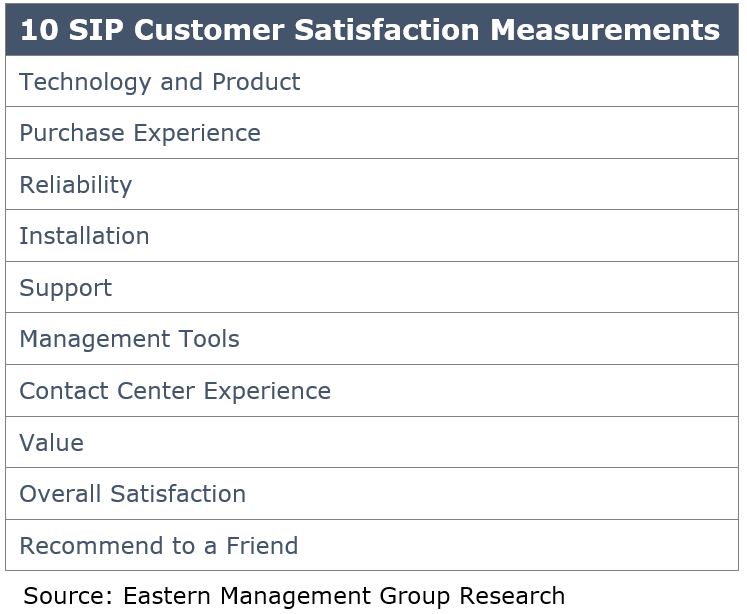 To make it into the Top 10 Leaders group, a provider needed to receive high ratings in three or more customer satisfaction measurements.

By and large, most of the thousands of IT managers we surveyed are satisfied with the quality of their SIP trunks, as mentioned in two previous No Jitter posts, "SIP Market Growth Strong to 2020" and "Beefing up SIP Distribution Channels." Ninety-two percent of IT managers who participated in the customer satisfaction study said they would favorably recommend their SIP trunk vendor to a friend. While not among the Top 10 Leaders, two incumbent telcos, Telefonica and Orange, are more likely to be recommended to a friend than three of the Top 10 Leaders.

Other incumbent telcos may have work to do in this area, our study shows. When looking at the other telcos as a group, on average more than 20% of customers expressed unwillingness to refer their vendors to a friend.

While Eastern Management Group did not interview the telcos for this customer satisfaction study, each one has the resources to score well in all 10 satisfaction measurements. So why don't they? This is our opinion. Incumbent carriers have large PSTN investments. Although several have already announced end-of-life dates for their PSTN (e.g., Deutsche Telecom, AT&T, and NTT) none want to walk away from that revenue just yet. Telcos often charge a premium for PSTN service. The accompanying chart from the Eastern Management Group's "SIP Global Market Analysis and Forecast 2016-2020" report compares PSTN and SIP prices for a telco and a SIP trunk vendor. The distinction in prices is clear.

So it's entirely plausible that a service provider might want to extend the life of its PSTN investment for as long as possible, given that transitioning customers to SIP trunks from high-priced PSTN circuits may hasten the service to unprofitability. And while all major carriers offer SIP trunks, they may have little incentive to sell and support them more than necessary.

Here's an example. While not being an incumbent telco, Sprint, with its massive network and large network operation centers, is quite like a telco. IT managers who use Sprint for SIP trunking rank the carrier third in the category of overall satisfaction, right up there with Twilio and Flowroute. And not a single Sprint customer interviewed for the study said it would not recommend Sprint SIP trunking to a friend. Sprint is a benchmark for what large telcos can do to improve their own SIP trunking customer satisfaction.

The time will come when incumbent telcos will need SIP customers. SIP is the key to significant pull-through revenue that telcos badly need and which many SIP trunk Top 10 Leaders have been successfully leveraging for years.

The SIP trunk industry has reached a point where vendors have benchmark companies to emulate when deciding to build best-in-class businesses. The total SIP trunking market size is, and will continue to be, large -- so providers should have good incentive to improve, as well as the time to do so. For questions about our customer satisfaction study and report please ask our researchers at the Eastern Management Group.