Switch app moves out of beta, gives enterprises a way to support voice and other communications capabilities in Google Apps.

Enterprises that use the Google Apps productivity suite can now add unified communications into the mix thanks to UCaaS startup Switch Communications and its new purpose-built phone application.

We first learned about Switch Communications and its app back in a November 2014 post from No Jitter blogger Dave Michels, president of Verge1 Consulting. At the time, Switch was working with early customers in a private beta. Earlier this month it released the app for general availability, and I caught up with Switch Communications CEO Craig Walker for the details.

The company's offering, called Switch, is a cloud-based business-grade phone system that integrates with Google Apps and allows users to place calls from any device and any location. This means they can take their work phone numbers with them in their pockets, alongside their productivity applications like Gmail, Drive, and Calendar. In addition to voice, Switch provides presence, IM, and text messaging through its own interface, and integrates with Google Hangouts via an API for video calls.

Walking the Walk
Switch Communications has been developing its Google Apps phone app for roughly 2 1/2 years ago, following the launch of its popular UberConference app, Walker told me in a phone interview. He calls Switch the "next-gen of a unified communications PBX in the cloud product for the Google Apps user base." That's a user base the Switch team knows well, given it comes out of Google itself, he added. "We know ... that this is a fast growing, online-structured community of users that doesn't have necessarily any phone system built for it. There is a bunch of generic stuff out there, but we realized that if we could build a product focused on that Google Apps user base it would give them a lot of unique, compelling [PBX] features from the cloud and make it so that it's not complicated to transfer calls."

As Walker demoed for me, setting up Switch takes just a few minutes. The app imports Google Apps users directly upon setup, so the company directory syncs immediately. Switch then uses Gmail history, Calendar events, and shared documents to provide the context for business interactions.

In his November post, Michels suggested that Switch could be challenged by the fact that Google does not have an API that allows third-party applications to access IM and presence in Hangouts. Switch doesn't see this as an issue, Walker said. It sees Hangouts presence as a "nice to have" not a necessary feature since Switch itself supports presence across the enterprise. At some point, however, Switch does hope Google makes such an API available so it can provide interoperability between the Switch and Hangouts presence capabilities. That said, this functionality isn't making the list of what people are requesting with Switch today, he added.

Google vs. Microsoft: Office Productivity Suites
Besides having the experience of about 20 former Google employees on the Switch team, Switch has done a fair amount of research into enterprise adoption of Google Apps. In the world of office productivity applications, the majority of the market falls into two camps: Microsoft Office or Google Apps. Now, with more companies making the move to cloud, the competition between the pair is really heating up.

Walker took a few minutes to take me through Gartner data that projects a large shift from on-premises to cloud-based solutions in the coming years.

As published in a report titled, "Choosing a Cloud-Based Office System: Google vs. Microsoft," Gartner found that Google is gaining ground on Microsoft in the productivity suite market. Specifically, Google Apps grew from about 10% of the cloud-office market in 2007 to 50% by 2012.

Most growth in the office productivity market will come from cloud-based solutions rather than on-premises offerings, Gartner predicts. Specifically, it estimates that of the total 1.2 billion office suite business users expected by 2022, 695 million will be using cloud-based solutions. 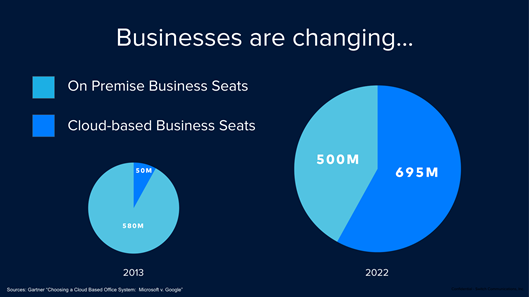 "That [cloud] base is going to be split between Office 365 users and Google Apps users -- that's the battle that's shaping up," Walker said. "Right now, Google probably has half or more of those [700 million business users], but Microsoft is making a very hard push with its Office 365 product. And it has a lot of advantages because it has the legacy guys that are using the on-premises Office product."

This is all excellent news for Switch, as I see it. With cloud-based applications on the rise and Google Apps gaining ground on Microsoft Office, this leaves quite a bit of opportunity for the company to capitalize on market demand.

Hear more from Craig Walker and on this topic at Enterprise Connect Orlando 2015, in the session, "Integrating UC with Google Apps." Register now and join us!