Enterprise network managers must rethink the traditional hub-and-spoke MPLS architecture if they're ever to enable true business agility.

Agility has been a critical business and IT goal for so long you might find it ludicrous that we're not there yet.

You might be inclined to blame it on the network -- and you wouldn't be alone.

Based on research conducted late last year, Zeus Kerravala, founder and principal analyst with ZK Research, found that enterprise organizations take four months on average to implement change in their networks. "That's not exactly the definition of agility," he quipped during last week's Enterprise Connect/No Jitter webinar, "Can Your Network Handle the Real-time and Cloud Traffic Explosion?" (register now to attend on demand).

Of all that comprises the IT ecosystem, Kerravala said, the piece that's most behind is the wide-area network. In fact, he added, the current state of the enterprise WAN is creating missed business opportunities and will end up costing companies that don't evolve their WAN architecture into a more dynamic, efficient model.

"You can't have an agile business without agile IT, which is why we spent some $12 billion [in private cloud infrastructure] last year. But you can't have agile IT without an agile network," Kerravala said. "This is the last component to fall in alignment with where the business wants to go."

The traditional hub-and-spoke architecture, borne out of the client/server days, fails to meet today's reality of cloud-based application delivery and mobile computing. Thought leaders are starting to think in terms of a software-defined or hybrid WAN, Kerravala said.

"I've talked to more companies that have had an interest in moving to some sort of dynamic split tunnel model, where the branches have direct Internet access, in the past year than in maybe the previous 10 years combined. So this is definitely a trend that's happening," he said.

In a software-defined or hybrid WAN, each branch office gets its own Internet connection to facilitate more efficient delivery of cloud-based applications. This differs from the traditional, highly inefficient setup in which the cloud-based apps and Internet traffic must first pass through a central site, then through an MPLS or other private IP network to the branch, and back down that same pipe for delivery out to the WAN. In fact, Kerravala noted, he's even seen some new models that eliminate the private IP or MPLS connection altogether.

Granted, not all companies will be ready to make that leap today. "But at a minimum, what you can do is use the MPLS network for your mission-critical applications and send all your other traffic down the Internet pipes. That's certainly lower cost, and it's going to provide better performance for those mission-critical apps," he said. 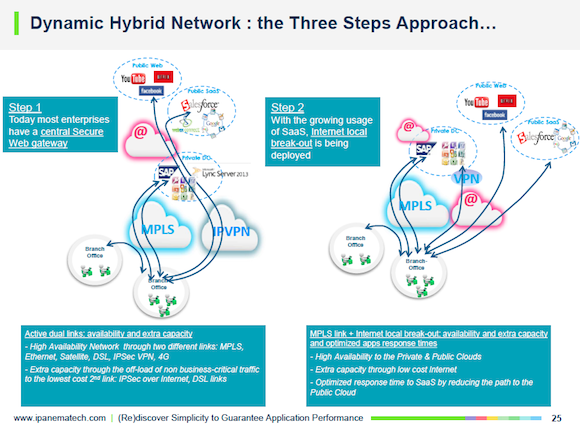 Kerravala encouraged network managers not to be deterred by the idea of carrying business-critical traffic over Internet connections. True, no single Internet connection can offer the same quality as a single MPLS connection, he said. But, having network technology that continually picks the best and least-congested route among multiple Internet connections can enable delivery of comparable or sometimes even better performance than MPLS, depending on the network and the types of traffic being carried over it, he explained.

Tune in to the webinar on demand for more insight on the software-defined WAN, including a rundown of:

At the end of the day, you should be able to ask yourself, "Do I have the network for making my business more agile?" If not, then you need to think differently about the WAN, Kerravala said. "The software-defined network is bringing unmatched levels of flexibility and agility to the data center, and now we're seeing it at the WAN."

The software-defined, hybrid network, Kerravala concluded, is "the right WAN model for this world of network-centric computing that involves initiatives such as cloud, Internet of Things, and mobility."