A look at how emergency communications were handled in the most recent California wildfires. 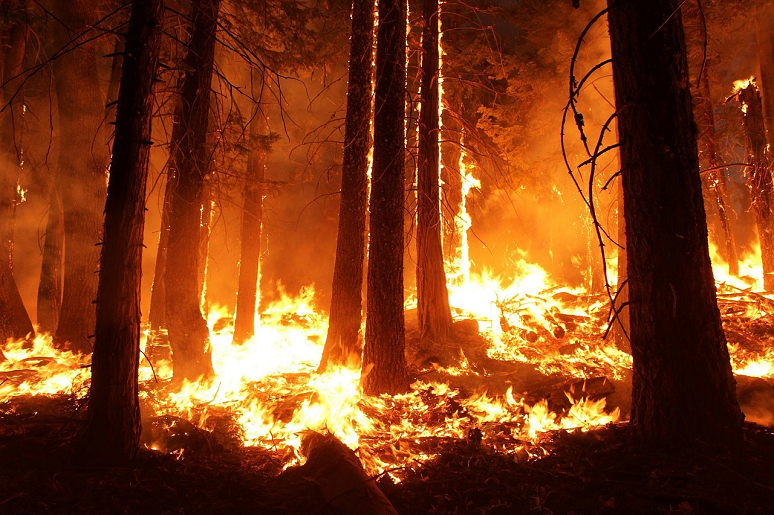 Last January, I wrote about the lessons learned from the northern California wildfires -- primarily the North Bay Wildfires in 2017. Unfortunately, the North Bay wildfire disaster has now been overshadowed by the Camp Fire in Paradise, Calif. With 88 confirmed dead, the Camp Fire ranks No. 6 in deadliest wildfires in the United States.
In a situation eerily similar to the North Bay wildfires in 2017, local authorities (Butte County) did not invoke a wireless emergency announcement (WEA). WEA is an “Amber” style alert that would have sent a message to all cell/smart phones in certain cell area(s). WEAs are established through FEMA’s Integrated Public Alert & Warning Systems (IPAWS).
To find out if your community is currently covered under IPAWS, check the following lists:
Instead of invoking WEA, Butte County used its “Code RED” system. This is an opt-in system where you need to sign up to receive emergency messages and is similar to Sonoma County’s SoCo system that was used in the North Bay Wildfire. However, unlike Sonoma’s SoCo system which has a 2% sign up rate, Butte County had a much better 25% participation rate. Of Paradise’s 27,000 residences, 6,000 cell phone calls were placed in the first 10 minutes. Of these, 3,600 cell calls were completed (reached a person or voice mail). While helpful, it was not enough to avoid a devastating toll. Paradise’s average age is 50 (California’s average age is 36), with a high number of people over 65 and limited cell phone use.
It wasn’t until late morning, when much of the city was already burning, that evacuation orders were finally issued for the western and central zones of the city.
In hindsight, the natural question is why didn’t Butte County issue a WEA alert? Over the next several weeks, Butte County officials will provide the reasoning behind their actions (or non-actions). What is likely to be discussed is the potential issues with sending a wide area alert.
WEA: Potential Problems
First, there is the “cry wolf” problem. If local officials invoke WEA too often (false alarms), it will inure residents to subsequent warning. What is the percentage of false positives, where an alert is sent, but there’s no real danger? By mid-November, FEMA reported that 108 WEA alerts have been sent out in California. How many of these 108 alerts turned out to be real emergencies? And even for those that were positive alarms, the danger may have been isolated to a small area. For those unaffected, there is a danger that after a series of false alarms, the WEA alerts will be ignored.
We all have been in a building when a fire alarm goes off. When this last occurred, did you immediately get up and quickly leave the building? Or did you stay to wait for further instructions? We have been inured to so many false fire alarms that we do not display the sense of urgency that may be needed if there was a real fire threat.
Second, because a WEA alert is usually broadly based, would issuing one create widespread panic? Many people who are not affected would take to the roads, creating massive traffic jams. This would not only block escape routes for those fleeing the wildfire, but also impede emergency vehicles from reaching those in need. In fact, many of those who perished in the Paradise Camp Fire were trapped in their cars, trying to find an escape route.
When you look at a topographical map of Paradise, you’ll see there are five road exits. In reality, the road north was unusable, so there were only four exits (south). How quickly can you evacuate 27,000 people in 15,000 to 20,000 vehicles over four roads? 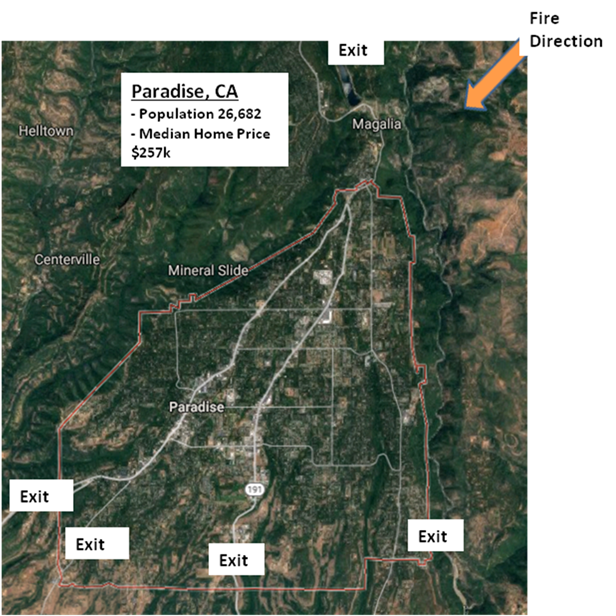 When you attend a sporting event at a large stadium, how long does it take to empty out the parking lot after a close game when everyone is leaving at the same time? Add panic to the mix and you have an idea of what evacuation was like for the Paradise Camp Fire.
Related Scenarios
A successful WEA alert was issued by Ventura County for the Thomas Fire on December 4, 2017. There was no loss of life due to the wildfire. However, one person did die in an auto accident. But what if the WEA alert that was sent was a false alarm? Would the story become how irresponsible County officials were in issuing the WEA alert that led to the death in the subsequent auto accident?
Rebecca Miller of Stanford’s Program in Environment and Resources, reported that Cal Fire, California Department of Forestry and Fire Prevention, lists 188 California communities that are “high risk”. This is based on factors such as topography, climate, and wind. Many of these at-risk communities are expensive, exclusive areas within California, including Danville, Orinda, Saratoga, Los Gatos, Laguna Beach.
In Laguna Beach, with a similar population to Paradise, there are only three exits. And in fact, a wildfire would start in the north, likely blocking an exit. If Paradise had trouble evacuating its residents with four available exits, how would Laguna Beach fare in a similar situation? 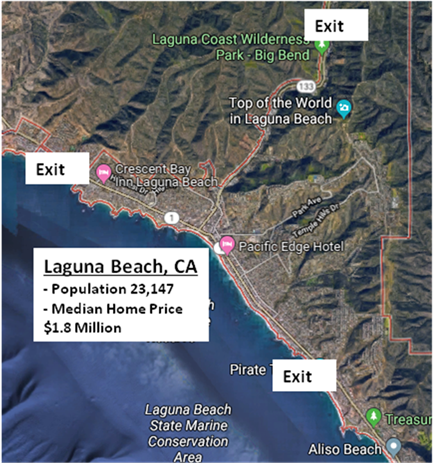 While the Paradise Camp Fire is still under investigation, there is a strong possibility that the fire was started by a downed power line. In a potentially ominous situation, the citizens for Laguna Beach recently voted down Measure P, Emergency Response and Fire Sales Tax, which would have moved overhead power lines underground, thus reducing the possibility of a wildfire.
So what are the additional lessons learned from the Camp Fire? Sign up to receive alerts. Understand the topology of your area, especially the number of exits from your area. If there are a few choke points, get out as quickly as possible. A few minutes can mean evacuating safely versus being stuck in traffic and being in the path of a fast-moving fire. Also, the next time you hear a fire alarm, get up and leave. Better to be safe than sorry.